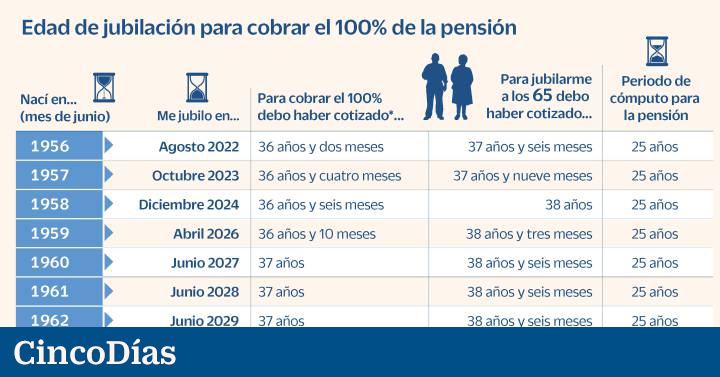 The retirement age continues to increase in stages since, in the pension reform that the Government of José Luis Rodríguez Zapatero agreed with the social agents, it was established that the legal age would go from 65 years to 67. This change began to be made gradually from 2013 and is expected to end in 2027. Currently, in 2022, the legal retirement age is set at 66 years and two months. Next year another two months will be added and the next another two, so on until the goal of 67 years is reached.

In the first package of the pension reform agreed between the Executive and the social agents, which was approved in the summer of last year, the legal retirement age and the calculation period were not touched. However, in the second package of the pension reform that the Government is negotiating with employers and unions (a negotiation that is becoming very complicated), it does seem that there may be changes in this regard, since Brussels has asked Spain to modify the number of years it takes to calculate the pension.

A substantial change that this Government has carried out was the repeal of the pension sustainability factor imposed by the Executive of Mariano Rajoy, which linked the amount of the pension to the evolution of life expectancy.

This tool was replaced by an intergenerational equity mechanism agreed in November 2021 between the Government and unions (the employers were against the measure), which will mean a 0.6 point increase in prices between 2023 and 2032. The companies will basically pay this increase (they will pay 0.5% more), while the workers will pay the remaining 0.1%.

See also  Zelensky came close to being captured by the Russians at the start of the war.
Tags: $67100202766ageagreebecalculationcanchangecollectfindintroducelegalmonthmove alongpackagepensionperiodplaceprogressivereformretirestayto gotwowaywithdrawalyear Andrew Cunanan, the luxury escort who killed Gianni Versace in the back