‘War criminal’: Biden to Putin for bombing civilians in Ukraine 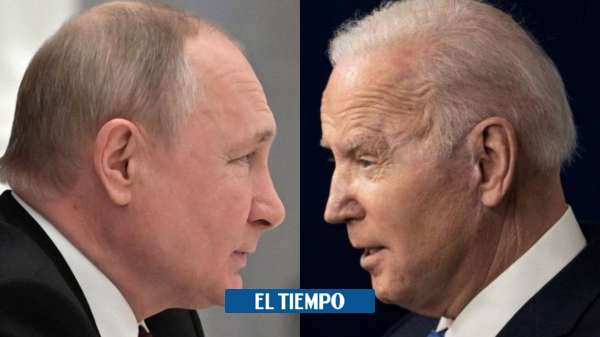 US President Joe Biden described this Wednesday as “war criminal” his Russian counterpart, Vladimir Putin, and announced massive military aid to Ukrainewhere civilians were targeted in bakeries, markets or in a theater packed with refugees.

“I think that [Putin] he is a war criminal“, Biden responded to a journalist who questioned him at the White House.

His press secretary, Jen Psaki, later said that Biden was “speaking with the heart” after seeing pictures of “barbaric actions of a brutal dictator through his invasion of a foreign country“.

Refugees from the port city of Mariupol, Ukraine.

The Russian reply was immediate.

“We consider such rhetoric by the head of a state whose bombs killed hundreds of thousands of people around the world unacceptable and inexcusable.“said the spokesman for the Russian presidency, Dmitri Peskov.

Biden had announced shortly before an increase to 1,000 million dollars in the amount of aid promised to Ukraineagainst 200 million initially promised to deal with the invasion.

“We help Ukraine acquire additional and longer-range air defense systemsBiden said, specifying that the aid will include drones.

(You may also be interested in: The tragic video of the destruction of Ukraine that Zelensky showed in the US).

Buying bread, in a shelter and more victims

Reports of bombings against Ukrainian civilian targets are multiplying as the invasion enters its third week and Russian troops attempt to complete the encirclement of kyiv, the Ukrainian capital.

Building destroyed by Russian bombing in kyiv, Ukraine, on Monday.

In the afternoon, Grad rocket fire at a convoy of civilians leaving the besieged port city of Mariupol caused an unknown number of deaths and injuries, according to the Ukrainian military.

In that same city, faced with a dramatic lack of food, water and medicine, a theater where civilians were sheltering was hit by a Russian bombardment. The local council assured that “more than a thousand people had found shelter” there, although without yet providing a balance of victims.

(We recommend: I saw death head-on: the story of a Colombian soldier in the war in Ukraine).

Ten people lining up to buy bread in Chernigov (north) died in the morning when Russian soldiers premeditatedly shot them, according to the Ukrainian Prosecutor’s Office. At night, the authorities reported the discovery of five bodies, including three children, under the rubble of a bombing in the same city.

In Kharkov (northwest), three people died and five were injured in a fire in a market, caused by bombing, rescue services reported. In kyiv, the inhabitants of the capital must respect a curfew until Thursday morning. According to the municipal authorities, kyiv lives a “dangerous moment“.

In a virtual address to the US Congress, where he received a standing ovation, Ukrainian President Volodimir Zelensky again called on the United States and its NATO allies for a no-fly zone over Ukraine to protect it from Russian attacks.

I need your decision, your help

“Is it too much to ask, to create a no-fly zone over Ukraine, to save people?“, I ask.

Addressing Biden in English, he said that leading the free world also means being the “peace leader“.

See also  Ukraine held exercises near the border with Crimea

Shortly after, the NATO chief reiterated that no troops will be sent to Ukraine but that they will strengthen its eastern flank. NATO has so far resisted calls to become directly involved in the conflict, for fear of unleashing a Third World War. between two belligerents with huge nuclear arsenals.

(You may be interested: The 15 points that Russia and Ukraine discuss to end the war).

In an interview with the US network NBC, Zelensky disputed that this Third World War “could already have started” and that “all civilization” was at stake.

Putin assured, in a televised government meeting, that the operation is being carried out successfully and compared the action of Western countries to the persecutions against Jews in Eastern Europe in the late 19th and early 20th centuries.

“The West has dropped the mask of decency and started acting hateful. Parallels draw with anti-Semitic pogroms“, he said, reiterating that he does not want to occupy Ukraine.

Before addressing the US Congress, Zelensky urged his compatriots not to give up, but hinted that the conflict would end with a negotiated settlement.

“All wars end with an agreement“, he said, referring to the difficult but important negotiations that continue between kyiv and Moscow.

(You can read: In the Russian attack, at least 10 people who lined up to buy bread die).

Kremlin spokesman Dmitri Peskov stated that Austria and Sweden could be taken as models of neutrality for Ukraine.

Without denying these discussions, the Ukrainian negotiator Mijailo Podoliak stated that “the model can only be ukrainian“.

In another address to his people, Zelenski indicated that his priorities in the negotiation “are clear: end of the war, security guarantees, sovereignty, restoration of our territorial integrity, real guarantees for our country, real protection for our country“.

In recent days, Zelensky has admitted that Ukraine had to accept that it will not join NATO. Preventing that accession was one of the main arguments used by Russia to justify its offensive.

For now, Western countries have chosen to isolate Russia diplomatically and economically, applying harsh sanctions that could lead to a default on its debt.

The Russian invasion generated volatility in the Russian economy.

Putin promised financial aid to individuals and companies to deal with the avalanche of sanctions and assured that the “Blitzkrieg“economic attack against his country failed.

This Wednesday, Russia was due to repay $117 million in interest on two debt bonds, the first installment in a series scheduled for March and April.

Some $300 billion of Russia’s reserves are frozen in Western banks.

The sanctions also forced Moscow out of several international political and sports forums.

At a time when Moscow tightens its control over published information on the conflict, the Russian telecommunications regulator Roskomnadzor blocked the pages of at least 30 media outlets and also that of the BBC.

MotoGP | Dovizioso: "I think little can be done on this bike"