The “Emperor” captures the “Wasfa” with the “Knight” quartet 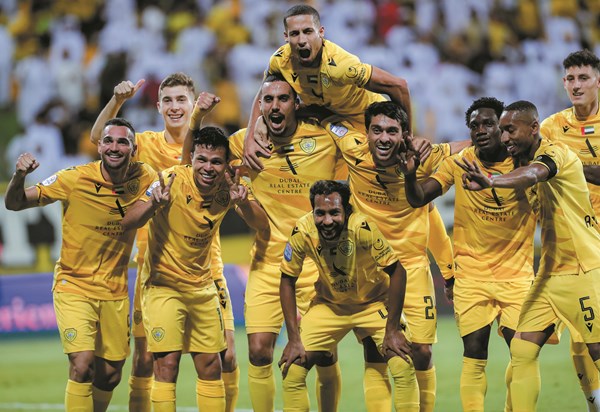 Mutasem Abdullah (Dubai)
Al-Wasl captured its wide-ranging victory over its guest Al Dhafra 4-0 at “Zabeel” Stadium in the fifth round, over “Wasafa” of the “ADNOC Professional League” ranking, after raising its score to 11 points equally with Al Jazira, and two points behind Sharjah “leader” before the upcoming confrontation. Between the two teams in the “Sixth Round” summit next Sunday at the “King” stadium in the smiling emirate.
The match between Al Wasl and Al Dhafra witnessed the celebration of Ali Saleh, the star of “Al-Asfar”, with his 100th league match over 8 seasons from 2015-2016 to 2022-2023, while “The Return” Fabio Lima celebrated his eighth “hat-trick” in the league.
The Emperor, who celebrated his first victory at home this season, started the confrontation with his guest, “Fares Al Dhafra”, perfectly, after he succeeded in opening the scoring in the 21st minute from the header of Moroccan defender Sofiane Bovetini, who benefited from a corner kick by Ali Saleh, and Bovetini successfully converted it. Inside the net, celebrating his first goal in the Al Wasl shirt.
Al-Wasl ended the first half with a two-goal advantage, after Fabio Lima, returning to participate with his team after missing the last round match against Al-Nasr in the “Derby” due to injury, scored the second goal from a free kick in the 42nd minute, which is Lima’s third goal from a free kick in the league after His goals against Al Dhafra and the Emirates in the 2015-2016 season.
“Al-Asfar” confirmed its superiority against “Fares Al Dhafra” at the beginning of the second half, after the “brilliant” Fabio Lima added his second and third personal goal for his team in the 47th minute, translating the smart through pass of his colleague Siaka Sidibe, and then the player himself returned to celebrate the “hat-trick”. The eighth in his career in the league when he scored his third personal goal, and the fourth for his team in the 52nd minute from a perfect header.
Fabio Lima’s hat-trick strengthened his advantage in the confrontations against Al Dhafra, after raising his score to 12 goals as the top scorer in the two teams’ confrontations, before being replaced in the 63rd minute against the entry of Omar Abdul Rahman.
Thanks to the 12th victory in the history of confrontations against Al Dhafra, Al Wasl maintained the longest unbeaten streak against an opponent in the Professional League for the sixth consecutive match, with 4 wins and two draws.

PvdA leader humbly about the Arib issue, but party members keep many questions