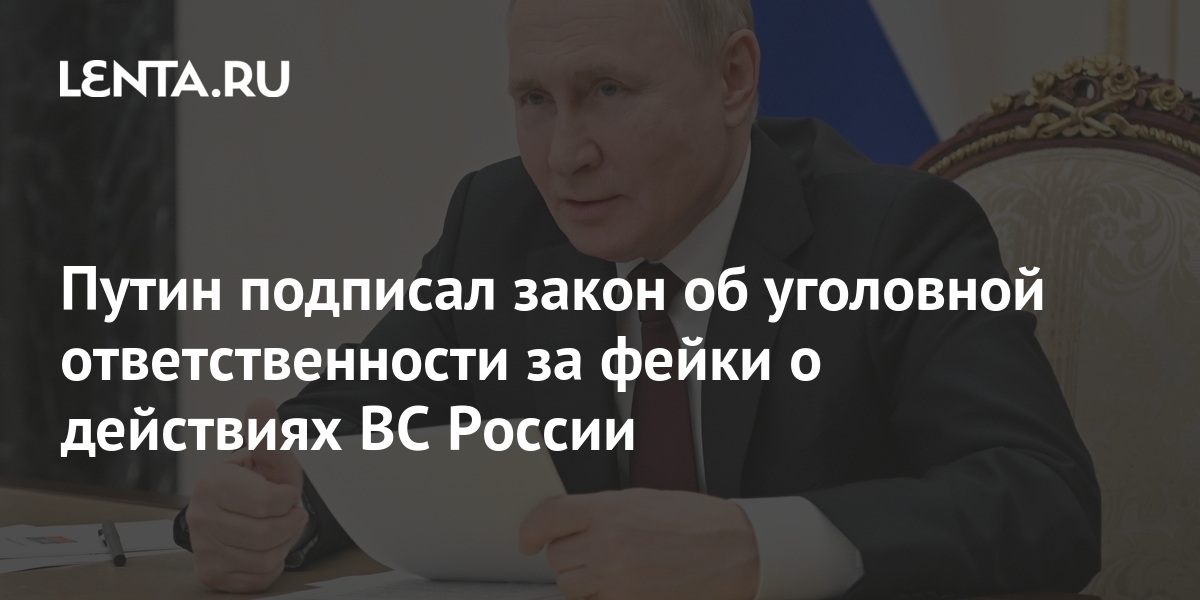 Russian President Vladimir Putin approved criminal liability for fakes about the actions of the Russian Armed Forces. This is reported TASS.

The Criminal Code of Russia is supplemented by Article 207.3 “Public dissemination of knowingly false information about the use of the Armed Forces of the Russian Federation”, which provides for imprisonment for up to three years or a fine of up to 1.5 million rubles.

At the same time, violation of this law using one’s official position, out of mercenary motives, based on political, ideological, racial, national or religious hatred or enmity, will be punished by imprisonment for up to 10 years or a fine of up to 5 million rubles. If false information led to serious consequences, the term of imprisonment will be from 10 to 15 years.

Also, the head of Russia signed a law on the introduction of administrative liability for discrediting the use of the Russian Armed Forces. This law introduces liability for public calls to prevent their use. It is noted that if such actions do not contain a criminally punishable act, then the fine will be from 30 to 50 thousand rubles. At the same time, officials in this case will have to pay from 100 to 200 thousand rubles, and legal entities – from 300 to 500 thousand rubles.

At the same time, if defamatory actions are accompanied by calls for illegal actions and create a threat of harm to the life or health of citizens and public safety, then a fine of 50 to 100 thousand rubles is provided, for officials – from 200 to 300 thousand rubles, for legal entities – from 500 thousand to 1 million rubles.

Responsibility for calls for sanctions

Putin also signed the law on responsibility for calls for sanctions against Russia. The article “Calls for the introduction of restrictive measures against the Russian Federation, citizens of the Russian Federation or Russian legal entities” was added to the Criminal Code of Russia, which applies to calls for the use of “restrictive measures” by a foreign state, state association, state or interstate institution in in the form of “imposition or extension of political or economic sanctions” against Russia, its citizens or legal entities.

Term of punishment for calls for sanctions against Russia

See also  Covid-19, the week in America - A new threat? Alert before detection of new cases of monkeypox

Sanctions for violation of the rights of Russians

In addition, the Russian leader signed a law on the possibility of applying sanctions against citizens of foreign states and stateless persons who violate the rights of Russians or commit crimes against them.

According to the document, restrictive measures can now be applied by the Russian authorities not only against US citizens, but also against citizens of other states. It is noted that the new act expands the scope of the law adopted in 2012 “On measures of influence on persons involved in violations of fundamental human rights and freedoms, rights and freedoms of citizens of the Russian Federation.”

See also  The new Dpcm by Draghi has been signed: here is the list of shops where it will not be necessary to show the Green Pass from February