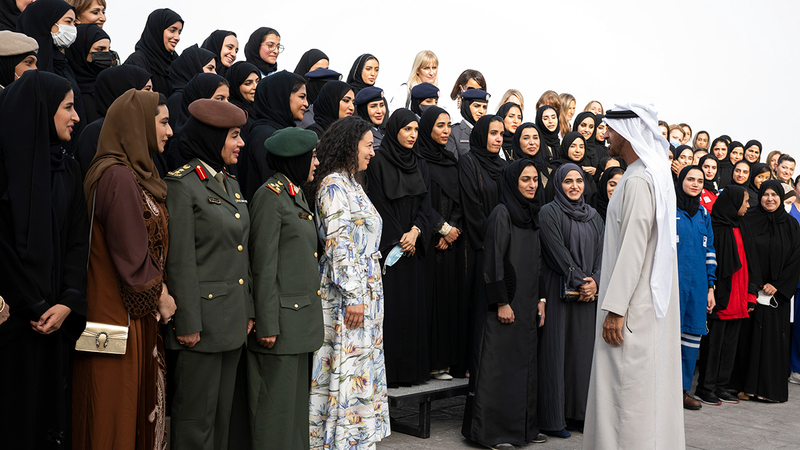 His Highness Sheikh Mohamed bin Zayed Al Nahyan, Crown Prince of Abu Dhabi and Deputy Supreme Commander of the Armed Forces, stressed the importance of the pivotal role of women in raising righteous and conscious generations capable of dealing with and overcoming various future challenges and contributing to building their countries, noting that women enjoy great prestige and appreciation in UAE.

His Highness said during his reception yesterday, women’s groups representing many authorities in the country at Qasr Al Bahr, that the appreciation of women is a consistent approach that we follow in the UAE. His Highness congratulated women in the UAE and the world on the occasion of International Women’s Day.

His Highness Sheikh Mohammed bin Zayed Al Nahyan pointed out that women have a great responsibility in raising children and the correct upbringing, especially that our country cares and focuses on the quality that makes the difference between countries, by preparing future generations that carry the flag, bear responsibility and participate in construction and work. In order to sustain and enhance the gains.

His Highness said that the leadership of the state, under the leadership of His Highness Sheikh Khalifa bin Zayed Al Nahyan, President of the State, continues to follow the path of the late founder Sheikh Zayed bin Sultan Al Nahyan, may God rest his soul, in supporting and empowering women and granting them equal opportunities, which had a great impact. In its success and excellence in all fields, and the consolidation of its role in building its homeland and serving its community.

• «Women have a great responsibility in raising children and in the correct upbringing».