Russia Russians fleeing hardening rule in their homeland on an Allegro train: “My country has been stolen from me” 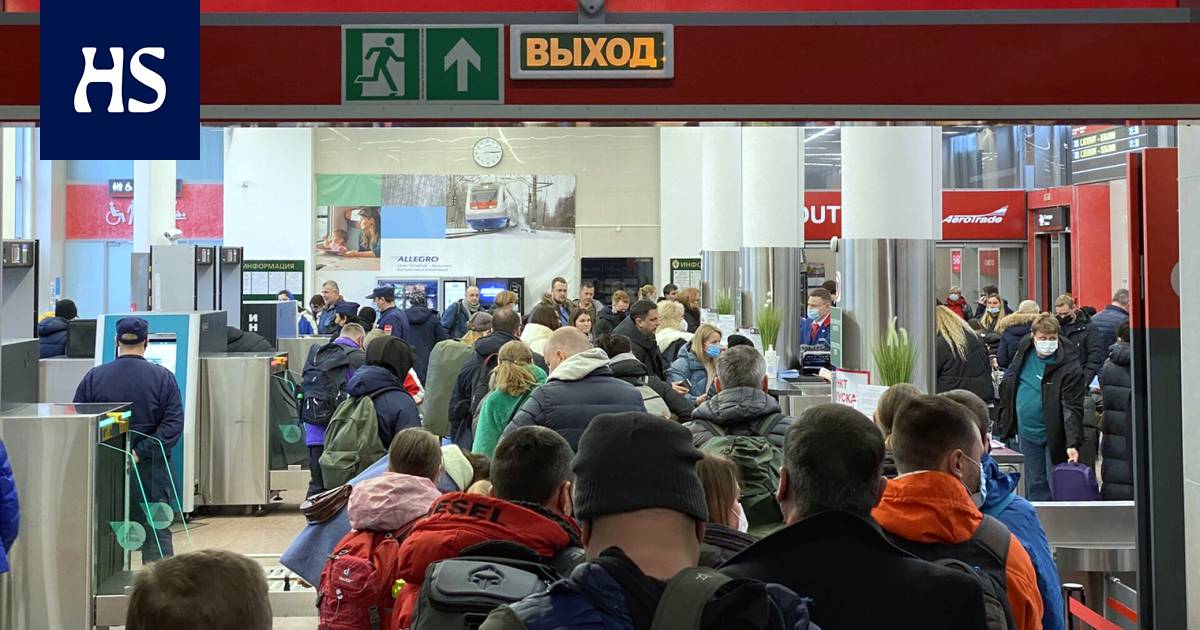 Farewell are always difficult, but they are especially difficult when there is no knowledge of reunion.

There were tears in St. Petersburg’s Finnish station on Monday afternoon. The Russians, who arrived in the congested waiting room at Allegro with large suitcases, said goodbye to their loved ones with tears.

Among the passengers were many Russians returning to their homes, including France and Italy, but also those who had decided to leave their homeland “for the time being”.

The Moscow couple only agreed to talk about their own travel plans on the Finnish side on the train. The destination of the private sector lawyer and her wife was Georgia because life in the home country has become a hassle. The couple could not say whether they would ever return to Moscow again.

They had to present and count all the dollars involved to the Russian customs authorities. They did not want to tell the Finnish media their name.

Allegro has had enough passengers in recent times. Picture: HS

Yelena Varnayeva was sitting in a restaurant car. Picture: HS

Allegrot have been so full of Russians leaving the country in recent days that they do not want to get tickets for them. Allegro’s Finnish conductor told HS in St. Petersburg that an increase in the number of train services is planned for next week.

With this wound, Allegroja travels daily in two directions, but a third flight is planned for next week. Before the pandemic, there were four shifts in both directions.

In a restaurant trolley enjoyed salmon soup and white wine Yelena Varnayeva first headed to Helsinki for a few days, from where he plans to fly to Malaga. There is no return ticket.

“I don’t know what to expect from this man,” Varnayeva refers to the Russian president.

“I’m afraid there will be an Iron Curtain, arrests, dictatorship and total control.”

The daughter lives in Holland, and Varnajeva is afraid she will not see her again. Varnajeva has worked in a large company in St. Petersburg to motivate staff and traveled a lot in her spare time.

Life has been good, but now Russia’s development has begun to remind him of his native Belarus.

In Helsinki, Varnajeva said that she first planned to sleep and put herself together because she had not slept for many days.

On Sunday, he visited St. Petersburg to demonstrate for the third time against the war in Ukraine. On Monday, he packed his main belongings and documents in a suitcase and locked the door to his home.

“I feel like we’re all collectively to blame for this,” he says as tears well up in his face. “We haven’t done anything.”

He hopes for a change of power in Russia and peace in the world.

See also  Trotting Iivo Niskanen was left behind in his first race start: “It's not like a sandy face”

Many had big bags with them. Picture: HS

Allegrosta has become one of the few routes from Russia to Western Europe. On Monday morning, Allegro was full of Russians on their way across Europe: Germany, Austria, Holland, Italy … Many had large stumps with them.

Most of the people seemed to leave the train at Tikkurila and continue their journey to the airport.

“You could also travel via Istanbul or Serbia,” said the young St. Petersburger Alinawho did not want to say his last name.

Alina is studying in the Czech Republic and has a Schengen visa. In addition, her husband, a third-country national, lives in Prague.

“I came to Russia in early February to visit my family. I didn’t have to return until the rest of the week, but because there was no information about the continuation of the Allegro train, I decided to get off early, ”he said.

Alina said she wants to stay in the Czech Republic in the future.

He has friends across the war front in Ukraine and the separatist region of Donbas.

He is now helping friends who have fled to the EU with transport, housing and work.

“Some of my acquaintances’ grandmother with disabilities are in Mariupol, and now we’re trying to arrange a ride for her out of there, ”she says.

For reasons of war, he said he “doesn’t like politics in any form.”

“It’s the same for me, who’s to blame, the most important thing is for the war to end.”

Many left the train at Tikkurila. Picture: HS

One of the passengers in the restaurant car work in Russia for the international human rights organization. Now it has been decided to evacuate the entire staff from Russia.

He is waiting for a month’s temporary accommodation in Helsinki. HS does not publish his name for security reasons.

“Our organization speaks openly about the war started by Russia, which violates international law. We are monitoring the war crimes of the Russian army. We have not been declared foreign agents, but our opportunities to operate are very poor. ”

He has taken part in anti-war demonstrations in Russia and is divided about the need for Russians in the West to take to the streets.

When asked if she is going to stay abroad permanently, she starts crying at the restaurant cart table.

“I never wanted to leave even if I got to work abroad. Now I have a feeling this can be final. My country has been stolen from me. Our country is declining so fast that we don’t even have that Russia two weeks ago. ”