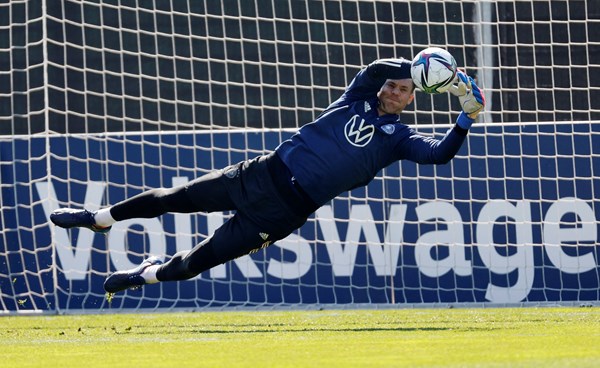 Anwar Ibrahim (Cairo)
The American Football League produced a promising goalkeeper, at the age of seventeen, named Gabriel Slonina, who plays for the Chicago Fire Club, and hopes to become the best goalkeeper in the world, and even the fans of his club and football experts in America have even compared him to the giant goalkeepers Italian Gianluigi Buffon and German Manuel Neuer, who is seen by many in the United States as one of the best stars of the US national team, despite his young age. Slonina contributed to the renaissance of his Chicago Fire team, who was born in the city of Chicago and contributed to the flourishing of football after it was in a deep slumber.
And if some compare him with the legends Buffon and Noir, but this does not represent any additional pressure on his shoulders, rather he admits that he loves this kind of comparisons, and seeks to confirm them, and works on himself with enthusiasm and calmness, and is not afraid of people talking about him, whether negatively or positively. And he is not worried about the idea of ​​additional pressure on him, because he really wants to be the new Buffon or Neuer’s successor. He comments on that by saying: People always compare me to them, so why shouldn’t I become like them?! He added, “It is a great honor to be compared to them, and even mentioning my name next to them is unbelievable because they are the best goalkeepers in the world and have achieved many achievements that I hope to achieve during my football career.”
Slonina is of Polish origin, loves goalkeeper from the softness of his nails, and he was very happy when people encouraged him while he tackled difficult balls, and this is what made him love to play in this position. At the age of 14, Slonina signed his first professional contract, becoming the second youngest player in the history of the American League after goalkeeper Freddy Addo. And last August, when he turned seventeen, he became the youngest goalkeeper to start a game in MLS history. Slonina says about it: I do my best to appear at a good level and train hard to be always ready and work on myself before and after training, and I watch a lot of football movies in order to learn and gain more experience.
Slonina, who will turn 18 on June 18, has been called up to the US national team for the first time, and is also eligible to play for his family’s native Poland.
Although he has not yet completed his first season with his current team, Chicago Fire, in the American League, some big world clubs, especially European ones, follow him closely and seek his services, because they see him as a “future goalkeeper” and because he has all the qualifications to play at the highest professional level.

See also  What you want to know about vaccinating children: seven questions answered

Barillari: “Those photos of Bucha too crude, I wouldn’t have shown some details”

“AstraZeneca” reveals the effectiveness of its new drug in preventing corona