Santander will build homes through its subsidiary LandCo 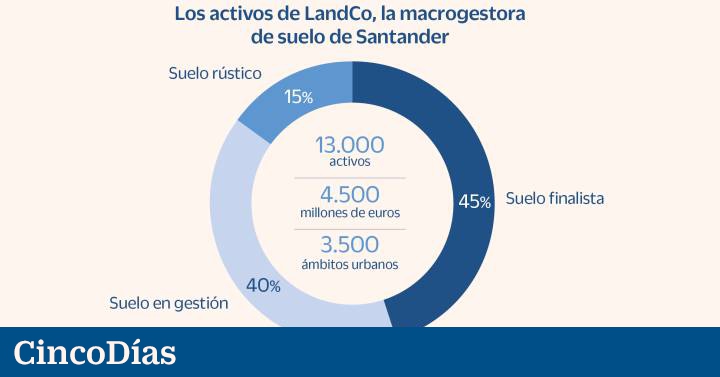 The Santander Group subsidiary dedicated to land management, LandCo, has opened a new housing development business, as detailed by the company itself in its latest accounts, those of 2021, recently presented in the Mercantile Registry. In this way, the bank has an additional leg in the developer sector, beyond Metrovacesa (of which it is the majority shareholder).

“During the 2021 financial year, the company has begun to develop a new real estate development activity on those lands where there was real estate interest,” the company says in the accounts.

In this way, the real estate development activity began within LandCo, but as an additional activity to the main one, which is the management and sale of land.

LandCo’s objective in residential development is to develop housing projects on land that, due to its small size or its location in smaller municipalities, is not of interest to real estate developers or cannot obtain developer financing to develop them.

The real estate company continues to analyze more land that could be suitable for developing development projects, as well as in the stopped works and without concluding that there are in the portfolio of the manager.

Santander is currently present in direct residential development through Metrovacesa, of which it controls 49.4% of the capital, according to CNMV records. In addition, he is a minority partner in Aliseda (allied with Blackstone), which manages the bank’s toxic assets for 30,000 million and also carries out new construction. Additionally, through Altamira Santander Real Estate (not to be confused with Altamira owned by DoValue) it also sells residential developments.

Santander created LandCo in 2019 as a novel initiative by launching a real estate agency for land management, as this newspaper advanced then. This company is responsible for advancing in the urban planning procedures for the land, coming from the bank’s foreclosed portfolio. To pilot the project, LandCo has Albert Burnt as CEO, a manager with experience in Habitat Inmobiliaria, Quabit and Ferrovial Inmobiliaria.

The financial entity chaired by Ana Botin transferred 13,000 assets to this company. The gross value of the land portfolio reaches around 4,500 million and they are located in 3,500 different urban areas, according to details of the company on its website. These plots have 45% the qualification of finalist land, 40% of land under management and 15% as rustic.

In Madrid they have land in future neighborhoods such as Los Cerros and Valdecarros; in Andalusia in Rojas Santa Tecla in Malaga and in Villanueva del Pítamo in Seville; and in Valencia in the Central Park, for example.

In the last year he entered 81% more

LandCo sales are gaining weight. The company –created in 2019 although with more significant commercial activity as of 2020– entered 81.5% more in 2021 than a year earlier, according to the latest accounts presented in the Registry. Specifically, it had a turnover of 94.27 million euros.

Losses also grew, 121%, to 77.61 million. The firm recognizes in its accounts a provision for impairment of 87.94 million at the end of that year to adjust the book value of its real estate assets to market value.