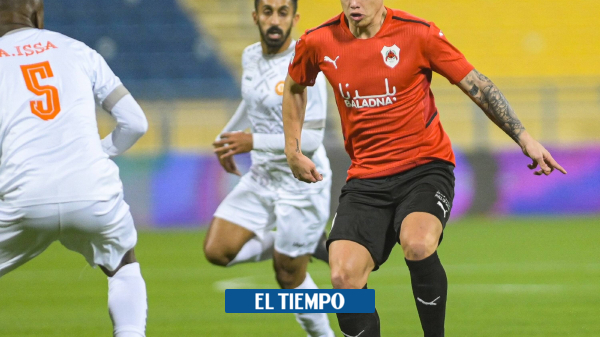 While Reinaldo Rueda continues looking for solutions to the serious goal problem that the Colombia selection, With a streak of 466 minutes without celebrating, and working with an experimental team from the local League for a friendly against Honduras this Sunday, in Fort Lauderdale (USA), several of the members of the base team give DT a good hope with good performances in this weekend of the Three Kings Bridge.

(Also read: Novak Djokovic: Australia analyzes expelling him although a judge favored him)

Already Rafael Santos Borré He had achieved his first double with Eintracht Frankfurt on Saturday, in a game in which they were ahead and ended up losing 2-3 against Borussia Dortmund.

On Sunday, the one who gave Rueda good news was Luis Fernando Muriel, who took advantage of Duván Zapata’s absence due to injury to start again and also celebrate two goals, in Atalanta’s 2-6 victory against Udinese, in Serie A.

James asks for clue: his first double with Al Rayyan

See also  With nine men, Tigres was able to get the victory against a brave Querétaro

Now, the protagonist who puts his cards on the table is James Rodriguez, in the match between Al Rayyan and Al Wakrah, which began on Saturday and was suspended that day due to what happened to the visiting club defender Ousmane Coulibaly, who suffered a heart attack in the middle of the game.

At the resumption of the meeting, this Monday, James was a star figure. He had already provided an assist on Saturday, taking a corner kick that Iranian Shoja Khalilzadeh headed in.

Now, James appeared with his first double in the Qatar League. In the 69th minute, a wall was invented with a teammate who got a bit dirty with a rebound from an opponent, but the ball fell just right for the Colombian to finish it off and score the second goal for Al Rayyan.

Three minutes later, James scored the third goal for his team and the second in the game, in a way in which he stood out at the beginning of his career and that he had not taken advantage of for a long time: he made it with a free kick, outside the barrier .

See also  The Universe, according to James Webb

It’s been almost four years since James last scored a goal with that formula. He hadn’t been able to do so since January 18, 2018, in Bayern Munich’s 3-1 victory against Bayer Leverkusen. It was also the eighth free-kick goal of his career.

James has not scored with the National Team since the disastrous afternoon in Quito, in the 6-1 defeat against Ecuador, in November 2020. He lasted a year without playing with the team and went blank in the two games in November last year. Little by little, the ’10’ recovers rhythm and hopes to reach the call with continuity.