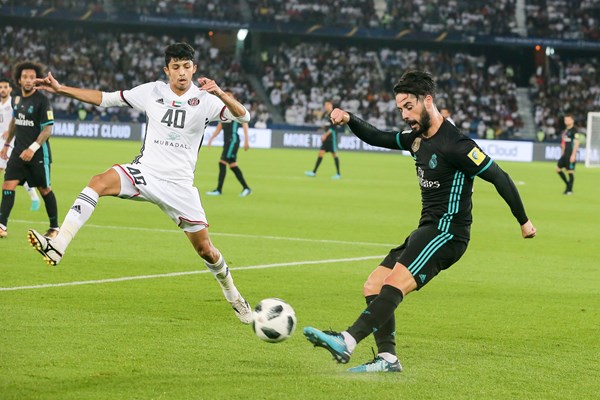 Abu Dhabi (Etihad)
The capital, Abu Dhabi, is preparing to host the largest football sporting event that returns to its stadiums for the fifth time at the beginning of the new year with the “Club World Cup UAE 2021”, where it is available to “Visa” payment card holders all over the world starting from the second day of January, specifically at 12:00 At noon, UAE time, buy tickets for the “World Club Cup UAE 2021” matches provided by Alibaba Cloud.
Visa cardholders can take advantage of the first-come-first-served tickets for the best seats by visiting FIFA.com/tickets, before tickets are released to the general public at 2pm on January 7.
It is worth noting that “Visa” is the official partner for the payment services of the International Federation of Football Associations “FIFA”, and is the best way to purchase all tickets for the Club World Cup UAE 2021.
Tickets are available at affordable prices on a first-come-first-served basis, with prices ranging from 20 dirhams for the fourth category to 200 dirhams for the final match in the first-class category.
The UAE Club World Cup 2021 comes as part of the major sporting events hosted by the Emirate of Abu Dhabi throughout the year, as the capital has established its position as one of the largest sports capitals around the world, having previously hosted that tournament on four previous occasions in 2009, 2010, 2017 and 2018.
On this occasion, Mohammed bin Hazam Al Dhaheri, the official spokesman for the Supreme Organizing Committee of the Club World Cup UAE 2021, commented: “With the FIFA Club World Cup approaching, we are pleased in the UAE and the capital of global sport Abu Dhabi to welcome the world again, in an exceptional event that brings together The elite and champions of the continents in the world.”
He added: “The Club World Cup is receiving great attention from football fans and fans around the world. And our hosting of the next edition will consolidate our partnership with FIFA in organizing a dazzling and safe global event, according to the highest standards of health and safety in order to preserve the safety of players, fans and all our guests during the tournament, and this is what Abu Dhabi has demonstrated, with its success during the last period in hosting a large number of international sporting events, with awarding The utmost importance to provide a safe environment in accordance with the highest standards and preventive measures.
Al Dhaheri added: “The fans in the UAE and around the world are on a date with a football tournament filled with the participation of champions and elite stars, and we are fully confident, through our continuous cooperation with the International Football Association, that everyone will enjoy watching an exceptional tournament and its events will be recorded in the history of football.”

This comes as Abu Dhabi, as the host city of the tournament in light of the Covid-19 pandemic, provides the highest safety standards to ensure the health of all participants and fans, as information on health measures will be updated during the “Club World Cup UAE 2021” on FIFA.com.

The UAE Club World Cup 2021 will witness the participation of the best teams in the world in Abu Dhabi over 10 days during the month of February, where their matches will be held at “Mohammed bin Zayed Stadium” and “Al Nahyan Stadium” with the ambition of winning the most expensive cup in the world of club football.

The tournament will kick off with an opening match on February 3 between the ADNOC Pro League champions Al Jazira Club and the representative of Oceania FC Berry Tahiti, while it will conclude with the final match on February 12.
And join the hosting team, Al-Jazira Club of the United Arab Emirates, each of the English club Chelsea, Monterrey of Mexico, Palmeiras of Brazil, Al Ahly of Egypt, Berry of Tahitian and Al Hilal of Saudi Arabia.

The call for Barcelona to face Mallorca: 17 casualties and 9 homegrown players

Szczesny penalty-savers: fifth in 2021! So Allegri has found the short muzzle