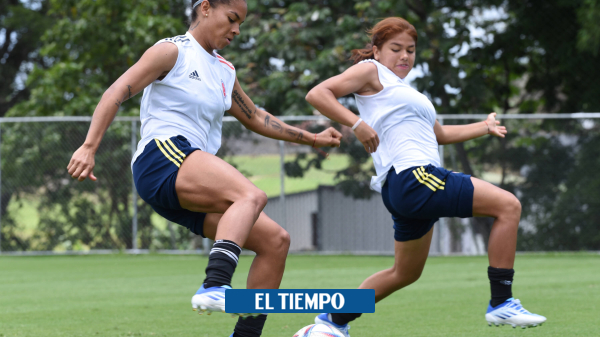 The favorite is Brazil and that is the starting point for the quarterfinal game of the Women’s U-20 World Cup. But the Colombia selection he earned the right to dream. At the tip of talent and self-respect, the National Team won group B and wants to continue making history.

At 9 pm this Saturday, the Colombian illusion begins to roll. Easy? Never. In front, they have a rival who, between the South American and the World Cup, has gone ten games without losing and without conceding goals, and who has only given up a draw, on the first date of the World Cup, against Spain (0-0).

Even on that path, they already beat Colombia, in the qualifying round in Chile, a 3-0 that was long for what the team led by Carlos Paniagua, at least in the second half.

The optimistic look of Carlos Paniagua

Paniagua sets high goals. “We all work to win and the message is that the time has come to beat Brazil, that we go out without complexes, with personality, that there will be passages where you have to risk to win, and not just talk about how strong they are , but what Colombia has shown in this World Cup and with this beautiful generation we have to go out and beat them, I think that in Brazil they don’t have a Linda Caycedo. We have to look for the possibility of seeking a world final and, why not, dream of winning the title”.

Carlos Paniagua, coach of the Colombian U-20 women’s team.

See also  Thiago Motta and the La Spezia paradox: the bench at risk (but after New Year's Eve). And in its place ...
Photo:

There is a difference in favor of Colombia, four months after the confrontation in La Serena (Chile): Linda Caicedo could not play the South American Sub-20 due to injury. Now she is not only ready, but the world of soccer already highlights her talent.

The DT, however, knows what he has, but he also demands it. “The great world champions have always had those different players. If we talk from the year 86 with Maradona, before with Kempes, and successively those who have stood out. We have a spectacular player like Linda, who makes a difference from her and the players feel supported by her. It is a bit burdening her with responsibility, she is a 17-year-old girl and we want her to enjoy the game, for her teammates to support her, for her to support her teammates and that her talent is important, but also that they work without the ball so much Gisela like her, that they collaborate with the team in that defensive phase”, said Paniagua.

“Linda is humble, down to earth, she knows where she is going, and I think neither she nor the other players are going to miss out on this opportunity to reach a world championship semi-final,” she added.

See also  Colombia said goodbye to the Women's U-20 World Cup: it could not score against Brazil

Liced Serna, one of the fighters in the Colombian midfield, knows that this time the mistakes of the South American game cannot be repeated, in which they lost 3-0 with two very similar goals, with a corner kick being awarded to the first stick.

“We have to go out with a winning mentality, we have to look for the game from minute one to the end. In the South American we wanted to hold out a bit and that was a mistake, now we are going to go out and look for the game”, Serna explained at a press conference.

For Paniagua, order and solidarity are key to being among the top four in the tournament. “We know that there is a great rival up front, but when you aspire and are not conformist, you have to take risks. We have to play a great game, hopefully without mistakes and with great success at the top”, he explained.

There are 90 minutes left to at least match what was done in 2010, when an unprecedented semifinal was achieved. Brazil is the favourite. But why not dream?