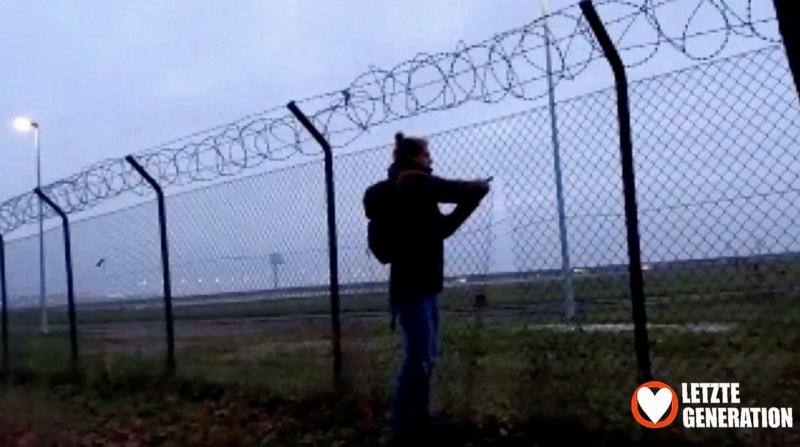 Screenshot of a video broadcast by ‘Last generation’ on social networks, in which a young man is seen cutting the fence to access the airport runway. / Reuters

Several young people invade the runways, stick to the asphalt and collapse the landings and takeoffs

Young activists from the environmental group ‘Last Generation’ have forced the suspension of air traffic for more than two hours this Thursday at the Berlin airport, after invading its premises and blocking the two landing and takeoff runways. The protest action led to the delay in the takeoff of numerous flights and forced several aircraft to circle in the air waiting to land. Other planes had to divert to nearby airfields to avoid fuel problems. The activists entered the German capital airport grounds around 4:00 p.m. from two different points after cutting through the security fences. The youngsters broadcast their action live on Twitter, after alerting the Police of their intentions shortly before, which was found to be fait accompli.

While several young people blocked the runways with sit-ins, others hindered the movements of the aircraft on the ground by invading the aircraft parking area on bicycles. ‘Last Generation’ announced in a statement that several of its members had blocked the runways of the Berlin airport after sticking their hands to the asphalt. The activists thus intend to protest against the pollution produced by air traffic and its consequences for global warming and climate change. “Due to the illegal entry of several people, the two BER landing and takeoff strips have had to be closed,” the aerodrome management reported a few times later in a tweet.

Airport activity was able to resume around 6:30 p.m. local time, after the young people were removed from the runways by police officers, who managed to get their hands off the ground. The protesters were detained. They will probably face charges such as serious disruption of air traffic. Given the radical nature of her actions, the German Minister of the Interior, the Social Democrat Nancy Faeser, recently warned that “the State will not allow you to mess with it. The police have my full support when they intervene against self-described climate activists who for weeks have been putting other people’s lives in danger with absolutely unacceptable actions.

‘Last Generation’ activists have been calling attention for weeks with spectacular actions on the danger of climate change. The night before, two militants from the organization stuck to the conductor’s pulpit shortly before the start of a concert at the Elbphilharmonie in Hamburg. Dressed in reflective vests, they demanded to speed up the fight against climate change. “Just as there is only one Beethoven violin concerto, we only have this planet,” said the two young people, who were taken away shortly after by police officers who took them into custody.

His actions take place all over the world and have focused on museums. Recently in Vienna they poured liquid on a painting by Gustav Klimt, while the Prado Museum in Madrid two activists stuck to the frames of Goya’s ‘Las dos majas’, in Australia they attacked Andy Warholl’s ‘Campbell’s Soup’, the London ‘ Sunflowers’ by Van Gogh and in the Barberini Museum in Potsdam a work by Monet. In Berlin, two activists are being investigated by the courts for the fatal accident of a cyclist who was hit by a truck. The blockade of a central street by ‘Last Generation’ militants delayed the arrival of ambulances and firefighters at the scene of the accident, which could aggravate the condition of the victim, who died four days later in hospital.