27 proposals behind the scenes of “General Hand” 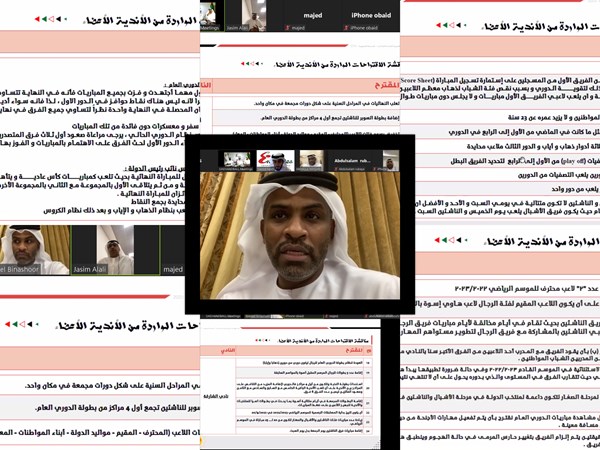 The General Assembly of the Hand Federation, which took place using videoconferencing technology, took only 15 minutes to approve the agenda, the minutes of the previous meeting, and the financial, administrative and technical reports of the Board of Directors, in the presence of Nabil Ashour, President of the Federation, Nasser Al Hammadi, Secretary General of the Federation, Daoud Malih, Head of the Competitions Committee, and Adnan Faraj. The head of the legal committee of the federation, and representatives of 16 clubs are members of the association, as well as Mohammed Al-Kaabi from the General Sports Authority, and Butti Al-Abdouli from the National Olympic Committee.
While the association witnessed the discussion of 27 proposals from the members for more than an hour, despite being transferred to the relevant committees of the federation and communicating with the clubs to implement it or not, all the proposals were presented to the audience.
Nabil Ashour, President of the Federation, thanked all the clubs for their permanent cooperation and to the members of the Board of Directors who made efforts to continue developing the game, stressing that such meetings come out with recommendations that serve the interest of the game, and the Federation will continue to strive towards a better future for handball, expressing optimism for the future of the game. By all together.
Ashour called on the clubs to support the national teams, pointing out that most clubs always offer their halls to train the teams, which confirms the strength of the brand between the federation and all the clubs of the game, stressing the federation’s support for the clubs’ participation in the foreign tournament, where Al Jazeera will participate in the Gulf Club Championship hosted by Kuwait Kuwait. During next June, Sharjah will also participate in the Asian Club Championship, which will be held in the same month as well.
Ashour revealed the communication with the continental federations and also the International Federation in order to develop the level of coaches, and said: “There is a license to practice the handball profession from the International Federation and it has already begun to be approved in Africa, and the International Federation is pressuring the continental federations for the coaches to obtain this course, and during the stage In the future we will provide international courses for trainers in order for all state trainers to have this license.
The president of the federation called on the representatives of the clubs to help the federation in bringing young referees, stressing that handball is different from the rest of the group games and the referee must have played before, and we will not deprive the young referees from playing as well, and there is a communication from Abdul Salam Rabie, Vice President of the Federation, Chairman of the Referees Committee With the Asian Football Confederation, in order to adopt continental referees and put them on the path to the international badge.
Ashour noted that there is a new system for the Super Championship, as well as a new name, and there is work within the competitions to develop tournaments, and it will be announced to the clubs as soon as the project is completed.
The discussion touched on the federation’s budget and the support of the teams, and Muhammad Al-Kaabi, the representative of the authority, who praised the general assembly, intervened and said: “There are broad changes in the next stage regarding the strategy for dealing with federations, especially in terms of annual financial support, as well as supporting national teams in a way that serves these teams before traveling to Championships.
As for the proposals that were the most prominent on the table of the General Assembly, which amounted to 27 proposals, most of them related to technical aspects, the competition system and registration for foreigners and residents, the most prominent of which was the increase in the number of foreign players for the men’s category to two, the abolition of the identity requirement for the resident player, and the amendment of the dates of junior matches.
The most prominent proposal was to amend the men’s league and return to its old system; The fact that the new system that was applied did not bear fruit on the competition, which was included in the proposals of more than one club, increased the number of men’s tournaments to 5 competitions and created the elite championship for the first 4 teams in the league, then demanded a reduction in registration fees for players.
It is noteworthy that the clubs that attended the meeting are Ittihad Kalba, Bani Yas, Al Bataeh, Al Jazira, Khor Fakkan, Dibba Al Hisn, Al Dhaid, Shabab Al Ahly, Sharjah, Al Dhafra, Al Ain, Maliha, Al Madam, Al Nasr, Al Wahda and Al Wasl.