Truss manages to anger Carlos III, his finance minister and the conservative deputies 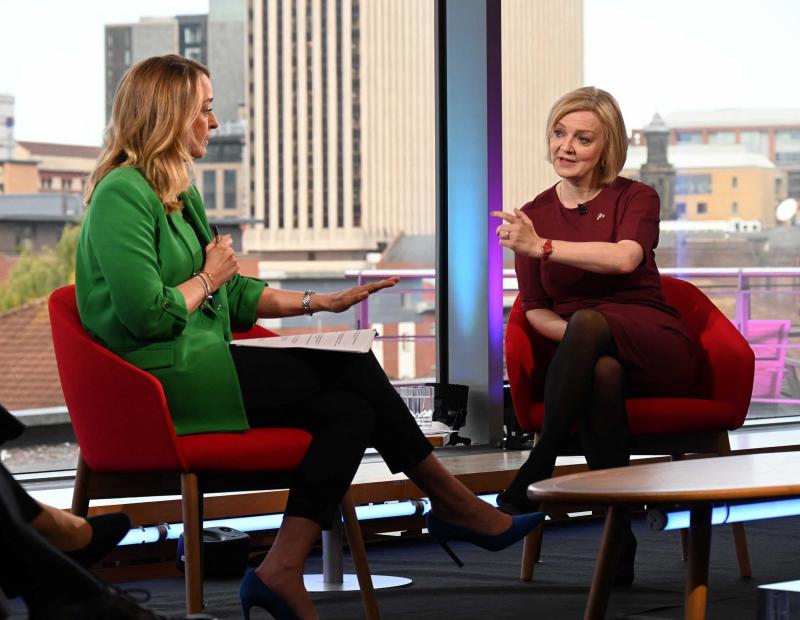 Liz Truss, right, during an interview this Saturday on the BBC, prior to the start of the annual Conservative conference. afp

The British Prime Minister, Liz Truss, has exclusively blamed her Finance Minister, Kwasi Kwarteng, for the decision to reduce the tax rate from 45% to 40% for income above 170,000 euros, in an interview with the BBC in which has recognized that the Government should have “prepared the ground better” for the mini-budget that caused a financial crisis this week.

In her first public intervention in Birmingham, where the Conservative Party’s annual conference begins this Sunday, the new head of government seems to have created the possibility of a conflict with Kwarteng. History says that British governments fall when the relationship between the occupants of numbers 10 and 11 Downing Street breaks down.

Disturbances proliferate. The British press publishes that Truss has prohibited King Charles III from attending the climate summit, COP27, in Egypt in November. Only people close to the monarch, who sees himself as a pioneer in warnings of an ecological disaster and was present at COP26 in Glasgow, would know of such a decision and can leak it to the press.

The intervention of the Bank of England has managed to stop for the moment the threat of financial chaos that was experienced on Wednesday. The Conservative conference could be another step to restore the solidity of political institutions, in a state of lethargy since the resignation of Boris Johnson on July 8. But for the moment fractures have been revealed in the Cabinet and in the party.

Kwarteng will deliver his speech on Monday. An exceptional student, he is described as more talkative than receptive to what others say. The ‘Sunday Times’ reveals that he went to a champagne ‘party’ with managers from the financial City after presenting his mini-budget, which caused falls in the pound and in the price of government bonds, and the risk of bankruptcies of pensions.

Truss’s friend and neighbor, both share the libertarian conservative ideology, in favor of reducing the size of the State. Both designed a strategy for the growth of the British economy, stagnant in its productivity for two decades. And with the cancellation of the tax increases agreed by Johnson with his finance minister, Rishi Sunak.

Truss says the top income cut was not discussed in cabinet, that Kwarteng announced it without asking her opinion. The minister seems doomed. He keeps a politically sensitive measure in a surprise envelope and does not understand that later drinking champagne with rich people whose taxes you have lowered is frowned upon. Truss has also told the BBC that there is “an excessive focus on the appearance of things” in politics.

Conservative MP Julian Smith has challenged the announcement that those who do not vote for the budget will be sacked from the parliamentary group. Mentioning the political optics. “The first task of a congressman is to act in the interest of his voters and in the national interest,” Smith said. “We cannot applaud the toilets one month and reduce taxes on millionaires months later.”

Former minister Michael Gove, who has shared a cabinet with Truss for more than a decade, revealed, also on the BBC, that he is on the hunt. “Borrowing to reduce taxes is not conservative,” he said. Of the discount to the higher rents he said: “Display wrong values.” “Will you vote for the budget?” “I don’t think that’s right,” he replied. Another Conservative, Nadine Dorris, criticizes Truss for “throwing the Chancellor of the Exchequer into the wheels of a bus on the first day of the conference.”