The WHO questioned the appearance of the deltacron strain 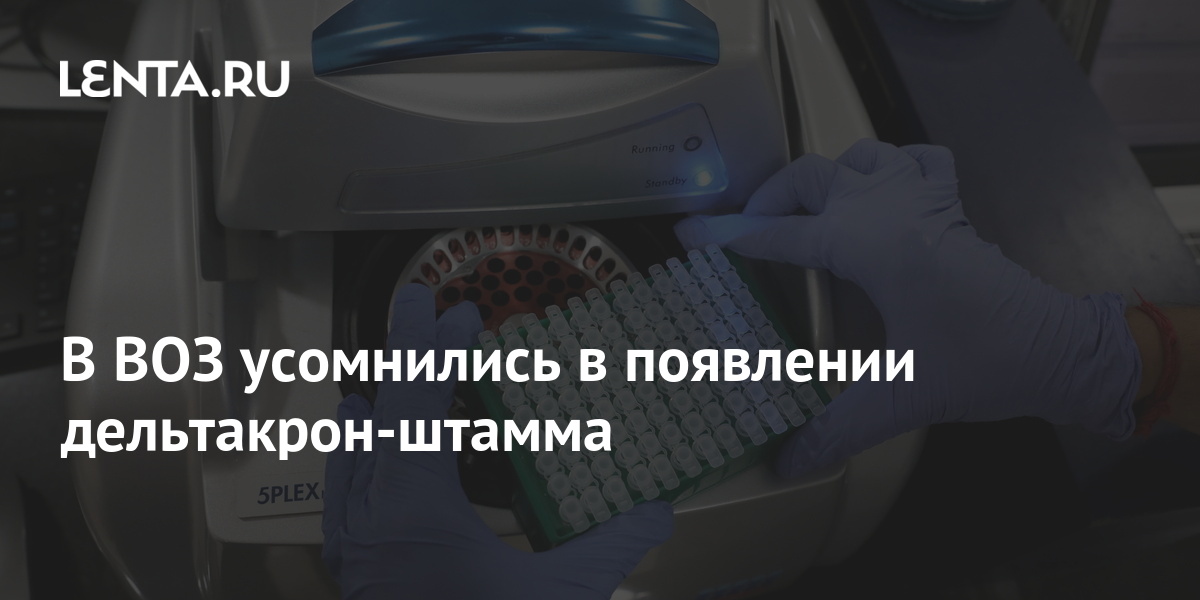 The head of the technical group of the World Health Organization (WHO), Maria van Kerkhove, ruled out the likelihood of a new hybrid strain of deltacron coronavirus infection. She wrote about this in her Twitter…

No combination of COVID-19 strains has been observed, she said, and the Cypriot researchers’ “find” could have been caused by contamination of the sample or equipment during genetic sequencing. She believes this may have led to a laboratory error.

What is known about the “deltacron”?

On January 8, it became known about the discovery in Cyprus of a new variant of COVID-19, which turned out to be a hybrid of previously identified strains of delta and omicron.

Scientists from the Laboratory of Biotechnology and Molecular Virology at the University of Cyprus, who have identified a new type of infection, named it “deltacron”.

The head of the laboratory, Leontios Kostrikis, said that the deltacron strain has a genetic basis like the delta variant, while a number of its mutations are similar to those of the omicron strain.

Leontios KostrikisHead of the Laboratory of Biotechnology and Molecular Virology, University of Cyprus

According to him, the omicron-strain has 30 mutations, and ten of them coincide with those found in samples taken in Cyprus. He added that in Cyprus, experts found the deltacron strain in 25 samples, of which 11 belong to people hospitalized with coronavirus infection, the rest from ordinary local residents.

The former chief sanitary doctor of Russia, Gennady Onishchenko, assessed the danger of a hybrid of COVID-19 strains delta and omicron found in Cyprus.

Virus strains cannot interact with each other, they are created and come into being in the fight against us, and not among themselves. Most likely, here we can talk about the fact that those mutations that were in the predecessor of the omicron were preserved

Kamil Khafizov, head of the scientific group for the development of new diagnostic methods based on sequencing technologies at the Central Research Institute of Epidemiology of Rospotrebnadzor, emphasized that it is too early to consider the delta-omicron hybrid discovered in Cyprus as a separate strain. In his opinion, it could have arisen as a result of contamination of samples in the laboratory.

Khafizov noted that at the moment there is no unequivocal opinion in the scientific community about the possible origin of the deltacron. He said that data on 25 mutations inherent in him had indeed been added to the GISAID database. At the same time, upon closer examination, they turned out to be similar to the mutual contamination of the delta and omicron samples.

Virologist Viktor Larichev believes that the deltacron strain requires additional study. He noted that at present it is necessary to figure out what properties the hybrid deltacron received from its predecessors.

Anatoly Altshtein, a specialist at the Gamaleya Center, added that viral strains are constantly changing. In his opinion, the deltacron strain will not be able to reach the global level.

Scientists warned that the entry of new strains of coronavirus infection into the animal environment could lead to serious mutations of the virus and new outbreaks of the disease. This was reported by the chief profilactologist of the Ural Federal District, scientific director of the Society of Preventive Medicine Specialists, Doctor of Medical Sciences Sergei Tokarev and microbiologist, scientific director of the Mechnikov Research Institute of Vaccines and Serums, Academician of the Russian Academy of Sciences Vitaly Zverev.

Tokarev believes that it is important to closely monitor the omicron strain in both humans and animals, since “with forward and reverse zoonotic transmissions, one day a super mutant may appear.”

Already now, using the example of foreign countries, we can clearly see the tremendous growth rates of hospitalizations and adults, and the filling of children’s, including intensive care, beds in France and England.

According to Zverev, theoretically, getting various variants of COVID-19 into the bat population could change them dramatically. This can cause new waves of disease. “When a virus finds an intermediate host, it can change so much that it becomes deadly and takes on completely different properties,” he said.

Christian Domínguez thanks Rafael and Karla for traveling with their son: “They are also his family”