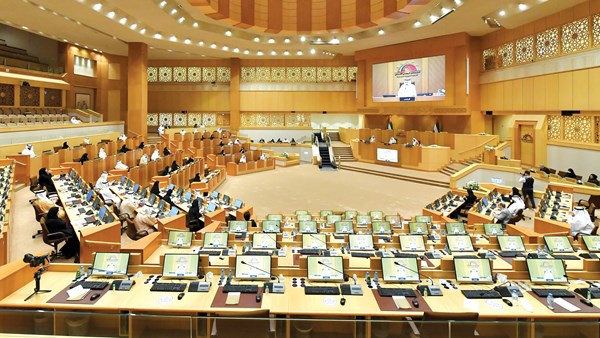 The Federal National Council, headed by His Excellency Saqr Ghobash, Speaker of the Council, will hold its third session of the third ordinary session of the seventeenth legislative term, next Tuesday, January 11, in the “Zayed Hall” at the Council headquarters, during which it will discuss a draft federal law on the adoption of the consolidated final account of the Federation and the final accounts of the bodies Independent of the fiscal year ending on December 31, 2020, and six questions are directed to government representatives.
Afra Bakheet Al-Alili asked a question to His Excellency Hussain bin Ibrahim Al Hammadi, Minister of Education, about “field training and volunteer hours for students of higher education institutions in the country.” Kifah Muhammad Al Zaabi asked a question to H.E. Jamila bint Salem Al Muhairi, Minister of State for Public Education Affairs, about “Health Insurance for Teachers.” The new ones.”
Four questions will also be directed to His Excellency Dr. Abdul Rahman bin Abdul Manan Al Awar, Minister of Human Resources and Emiratisation, including two questions from Sabreen Hassan Al Yamahi about “localizing administrative and supervisory jobs in the private sector,” and about “unifying the vacation and working hours system between the private and government sectors,” and two questions from Obaid Khalfan Al-Ghoul Al-Salami on “The Localization of the Position of the Executive Director in Vital Companies in the Private Sector”, and H.E. Naama Abdul Rahman Al-Mansoori on “The Localization of the Profession of Auditors in the State”.
The Council is briefed on five draft laws received from the government, three of which were urgently referred by His Excellency the President of the Council to the relevant committees, namely: a draft federal law on juvenile delinquents and those exposed to delinquency, a draft federal law on rehabilitation that was referred to the Defense, Interior and Foreign Affairs Committee, and a draft A federal law on the regulation of commercial agencies was referred to the Committee on Financial, Economic and Industrial Affairs.
The Council refers a draft federal law on organizing places of worship to the Committee on Social Affairs, Labor, Population and Human Resources, and a draft federal law amending some provisions of Federal Decree-Law No. 23 of 2021 regarding military decorations, medals and insignia to the Defense, Interior and Foreign Affairs Committee.
The council is briefed on a letter issued regarding a request for approval to discuss the topic of “government policy in the matter of water security,” as well as seven decrees of international agreements and treaties concluded by the government.