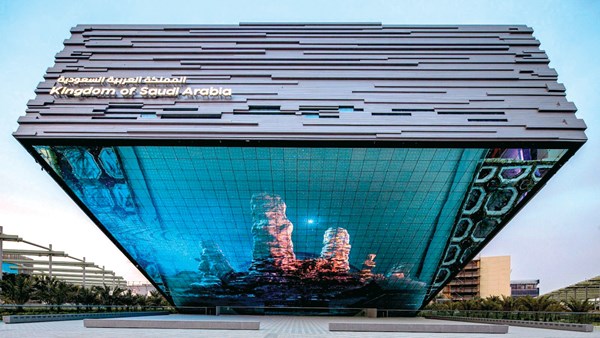 The pavilion of the Kingdom of Saudi Arabia announced the program of the Kingdom’s National Day celebrations at Expo 2020 Dubai, which will be held tomorrow, Friday, in the presence of His Highness Prince Badr bin Farhan, Minister of Culture of the Kingdom, and includes a schedule full of artistic, cultural and economic activities that reflect the essence of the Kingdom, which has a rich heritage and ancient civilization. and the Kingdom’s vision 2030.
Engineer Hussein Hanbaza, Commissioner-General of the Saudi Arabian Pavilion, said during a press conference yesterday that the program will start at 2:00 pm tomorrow, Friday, through a cultural march with the participation of the military band, and with the participation of the pavilion’s volunteers, in different Saudi costumes, and artistic performances in the Kingdom’s pavilion, as well as In the Al-Fursan Garden, adjacent to the pavilion, which will witness many cultural and musical programs, in addition to a concert that will be held at seven in the evening in Al-Wasl Square presented by a Saudi orchestra and a visual show on the Dome of Al-Wasl, and another concert by Arab artist Mohammed Abdo.
Regarding the economic aspect, it will include an introductory seminar on the promising investment sector in the Kingdom and the vision of 2030 in the investment sector within the national investment strategy, and mega projects, such as NEOM, the Red Sea and Diriyah Project, and other projects.

3.5 million visitors
The Commissioner-General said that the pavilion of the Kingdom of Saudi Arabia achieved many important numbers during the first three months of the launch of the “Expo”, by attracting more than two million visitors so far, at a rate of 22 thousand visitors per day, indicating that these numbers exceeded expectations, as the target was to attract 11 thousand visitors per day and the equivalent of 11% of the Expo visitors, where the ratio currently ranges between 22% and 24%, and the number of visitors to the pavilion is expected to reach more than 3.5 million visitors by the end of the event.

The Commissioner-General of the pavilion indicated that the Kingdom is looking beyond the registered numbers of visitors and investment opportunities, as it looks at the positive returns of this preparation and benefit from it to introduce the Kingdom and its cultural and civilizational diversity to visitors from all over the world, pointing out that the pavilion contributed to the rise in the number of tourists to Kingdom during the last period.
Promoting the “Expo 2030” file. Hanbaza revealed that the Kingdom of Saudi Arabia is planning to launch a full program to introduce the file hosted by “Expo 2030” in Riyadh in its pavilion at “Expo 2020 Dubai” during the month of next March and the beginning of the stage of promoting the file, noting that “Expo 2020 Dubai” is an important platform for promoting the hosting file. The Kingdom of Saudi Arabia for “Expo 2030”, especially with the visit of several government delegations to the Kingdom’s pavilion from more than 140 countries, which confirms the importance of the event in supporting the Kingdom’s file, praising the strong support provided by the UAE leadership to the file.

5400 square meters
Lina Al-Ghamdi, Events Coordinator at the Saudi Pavilion at Expo 2020 Dubai, said that the event aims to introduce sports activities in the Kingdom, by displaying a race car for the rally race, and display screens focusing on some activities, such as football, with a focus on a track. Formula 1 races at the racetrack in Jeddah. The Sports, Fitness and Wellness Center in the Expo 2020 Dubai mobility area attracts various sporting events; It covers an area of ​​5400 square meters.