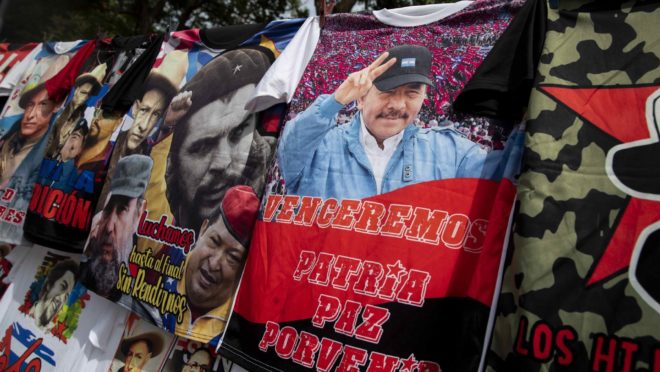 0
SHARES
0
VIEWS
Share on FacebookShare on Twitter
T-shirt with the image of Daniel Ortega, on the day of the inauguration of the Nicaraguan dictator, in Managua, January 10| Photo: EFE/ Jorge Torres

The Argentine ambassador to Nicaragua, Daniel Capitanich, participated in the inauguration ceremony of dictator Daniel Ortega, on Monday, which was also attended by an Iranian official who is one of those accused of the attack against the Asociación Mutual Israelita Argentina (Amia) in 1994 in Buenos Aires.

Mohsen Rezai, a former commander of Iran’s Revolutionary Guard, was appointed months ago to the post of Vice President for Economic Affairs for the Persian country. At the time, the Argentine government condemned the appointment of Rezai, who has an international arrest warrant against him. The appointment of Ahmad Vahidi as Iran’s interior minister was also repudiated by Argentina on the same date.

Although Argentina on Tuesday sent a “non-verbal note of protest” to the Nicaraguan embassy, ​​the case has led many in the country to question why the Argentine ambassador followed the ceremony, even with the presence of the suspected of the intellectual and financial authors of the attack that killed 85 people and wounded another 300. They also question why the Argentine government did not demand the arrest of Rezai in the Nicaraguan capital, Managua.

In the note sent to the Nicaraguan representation in Buenos Aires, the Argentine government expressed its “strong complaint” about Rezai’s presence at the inauguration ceremony.

“The Argentine government deeply regrets the presence of Mr. Rezai in the Republic of Nicaragua”, reads the note sent by the Ministry of Foreign Affairs of the South American country.

Both the Jewish community in Argentina and the justice system blame members of the then Iranian government and the Lebanese Hezbollah party for the attack, although none of the accused has been arrested.

During the ceremony in which the dictator Ortega was sworn in for his fifth term, the fourth in a row, the Iranian official was introduced as “Brother Mohsen Rezai”. He then responded to the greeting and was photographed with Ortega and Venezuela’s dictators Nicolás Maduro and Cuba’s Miguel Díaz-Canel, according to Infobae.

Opposition to Fernández’s government and the Jewish community in Argentina asked Foreign Minister Santiago Cafiero to explain the matter to Parliament.

“Capitanich is not a diplomat, nor a career, nor a politician. He is an uncertain representative who committed a crime. Amia. Daniel Capitanich cannot be labeled as ignorant”, stated Jorge Knoblovits, president of the Argentine institution.

Argentinian deputy Waldo Wolff said that, given the diplomat’s “complicit presence” at the act in which the Iranian accused was present, an “urgent interpellation request” will be made to the Argentine chancellor.

Patricia Bullrich, Argentina’s former security minister, tweeted that “this is the price of supporting dictatorships”.

In article for La Nación, political journalist Joaquín Morales Solá says that the “levity” with which the Argentine government treated the case of the Iranian wanted for the attack on Amia reveals a “disdain for republican principles”.

According to the journalist, the Argentine ambassador should have withdrawn from the event as soon as he noticed Rezai’s presence.

“[O embaixador argentino Daniel Capitanich] committed a crime as a civil servant because he did not ask for the immediate arrest of a fugitive from Argentine justice, such as the Iranian Rezai”, Solá argued.

On Tuesday, the Argentine Ministry of Foreign Affairs also issued a statement demanding the full cooperation of the Iranian government to allow those accused of the attack to be brought to justice.

According to the government of Alberto Fernández, the acts of which Rezai is accused constitute “a crime against humanity under customary international law, which is why his presence in the city of Managua, even as vice president for economic affairs of the Iran, does not exempt him from answering to the Argentine judicial system”.

“This obliges us to express our strong complaint. The Argentine government is fully committed to providing justice to the victims and our country will not stop in its objective of taking all those involved in the attack to Argentine courts for interrogation and, eventually, sentencing”, says the text.

The Argentine government, taking into account the “bonds of friendship” that bind it to Nicaragua, “as well as the obligations arising from international law”, hopes to “count on the full cooperation of the international community to ensure the appearance of the accused and the clarification of the Amia case,” adds the official complaint.