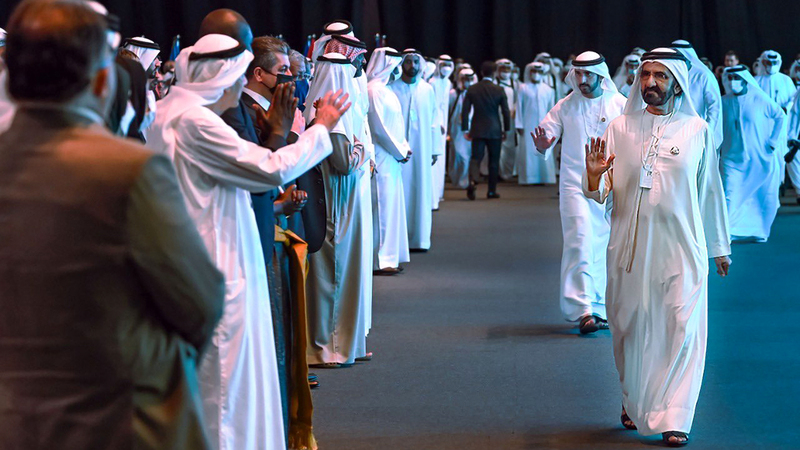 His Highness Sheikh Mohammed bin Rashid Al Maktoum, Vice President and Prime Minister of the UAE and Ruler of Dubai, yesterday received Sultan Hassanal Bolkiah Moez Al-Din, Sultan of Brunei Darussalam, on the sidelines of the World Government Summit 2022, held at the headquarters of “Expo 2020 Dubai”, which Sultan Hassanal Bolkiah participates in its work by giving a keynote speech.

His Highness welcomed the Sultan of Brunei and the accompanying delegation, at the beginning of the meeting, which was attended by His Highness Sheikh Hamdan bin Mohammed bin Rashid Al Maktoum, Crown Prince of Dubai, and His Highness Sheikh Maktoum bin Mohammed bin Rashid Al Maktoum, Deputy Ruler of Dubai, Deputy Prime Minister and Minister of Finance. Bilateral relations and ways to develop them in various fields, based on the depth of brotherly ties between the two friendly countries and peoples, based on a solid foundation of consensus of views on all vital issues at the regional and global levels.

His Highness Sheikh Mohammed bin Rashid Al Maktoum expressed the UAE’s pride in its historical relations with the Sultanate of Brunei, and its keenness to expand the base of cooperation in various fields, especially economic and cultural, as this calls for a joint endeavor to discover more opportunities that will advance the future of cooperation between the two countries. Towards a new phase of strategic partnership.

The meeting touched upon discussing the importance of working to increase the volume of trade exchange between the two countries, engaging the private sector, and encouraging investors on both sides to activate bridges of cooperation and build more of them, especially in the fields of tourism, financial services, agriculture, and other major economic sectors, in order to increase the impact of cooperation in Support the sustainable development goals of the two countries.

The two sides discussed the ambitious goals of the World Government Summit, which seeks, through the qualitative participation that it attracted this year, to make a positive, tangible difference in people’s lives, by anticipating development requirements over the next stage, and finding solutions and ideas through which to develop the optimal model of government work that It serves to create a better future for the human being, by monitoring the most prominent global challenges, whether current or potential, and how to enhance the ability of governments to anticipate rapid changes, and prepare for them by creating solutions that enhance the lives of societies.

The work of the summit, which kicked off yesterday, was held at the Dubai Exhibition Center in the “Expo 2020 Dubai”.

In his opening speech, the Minister of Cabinet Affairs and Chairman of the World Government Summit Foundation, Muhammad Abdullah Al Gergawi, stressed that the basic objectives of the World Government Summit answer questions of the future, and anticipate the most important developments in our world, economically, scientifically, technically and politically, and bring the distance between governments closer and the developments awaiting them. And upcoming changes in the future, noting that its goal, at the end of the work of its current session, will be to try to find out some answers, and to help governments set priorities and monitor challenges.

He also stressed that the summit seeks to clarify the picture, highlight opportunities, and reveal the challenges that the future holds in the issues of energy security, the future of climate change, government development, the new revolution in cryptocurrencies, and the role of central banks.

He touched on three forward-looking readings for the future, the first that the coming speed of change is much greater than we expect, the second that there are no axioms when dealing with the future, and the third that government partnerships with companies in the future is a necessity and not a luxury.

He added that “the digital economy has multiplied eight times in the last two years, to reach four trillion dollars, and distance education has doubled 11 times in the last two years, and telemedicine has increased by 154%, while the size of its market will reach 400 billion dollars during the next five years.” And the number of devices connected to the Internet will double from 26 billion devices by the end of the last decade to 50 billion devices in just two years.”

He added, “The belief that global strategic alliances, international legal obligations, and common values ​​among nations were taken for granted…so that the scales will turn, so that in 2022 we will see a war in the heart of Europe, and waves of millions of refugees.” We used to believe that the world was settled through agreements and treaties in the areas of energy security and its future, and today we are faced with more questions than answers in this field.”

He said: “Governments in their current form over hundreds of years have been the main tool for developing societies and driving the wheel of growth, but a very large part of the developments and changes that human societies are witnessing today are led by the private sector.”

Al Gergawi added: “The development of transportation networks and tools, and even space exploration, was the preserve of governments, and today we see the private sector working on manufacturing spacecraft, the cost of which is one-tenth of the cost that governments spend, and we can say the same about new energy, and education, And others.”

He added, “There must be a solid relationship between governments and companies to strike a balance between the interests of societies and the interests of companies, in order to maintain the cohesion and security of global societies.”

He reviewed milestones in the history of the summit, which succeeded in anticipating radical global transformations.

He recalled that the World Summit of Governments in the 2018 session was anticipating the future of epidemics, pointing out that anticipation and enhancing readiness for challenges represented the most important element in the equation of governments that succeeded in testing the “Covid-19” test.

And he touched on the foresight of the summit in the 2016 session, the future of financial transaction technology (blockchain), virtual and cryptocurrencies, and expected tremendous growth for them.

“Today, governments are trying to live with the reality of having crypto assets worth $2 trillion around the world,” he said.

Vice President of the State:

• “The efforts of international financial integration must be separated from political differences.”

The President of the World Government Summit Foundation, Muhammad Al-Gergawi, said that the World Government Summit hosted, several years ago, a dialogue on virtual reality technologies, with global entrepreneur Elon Musk, and today, Metaverse technologies, and their huge capabilities and rapid developments, have become the talk of the world, amid expectations that The size of this sector will reach 800 billion dollars, over the next two years.

Al Gergawi continued: “At this summit in 2013, we had a miniature version of the Museum of the Future. A few weeks ago, His Highness Sheikh Mohammed bin Rashid Al Maktoum inaugurated a permanent museum for the future.

He stressed the need to be aware of the challenges posed by the new wave of change, whose effects include the quadrupling of inflation in the countries of the world in the last two years, and the doubling of natural disasters three times more than they were in the past decades, due to climate changes, which confirms that the study of the future has become more important for governments. And that the flexibility of governments and their ability to keep pace with changes has become a necessity more than ever, because the slowdown in responding to changes has greater consequences for countries and peoples.

• Changes do not stop.. Governments that want to remain within the framework of competition must keep pace with all these changes.

• Over the past years, the summit has explored future challenges and opportunities to serve governments.

• The digital economy has multiplied 8 times to reach $4 trillion.

Otter.ai: a 2.0 revolution to become a business hub