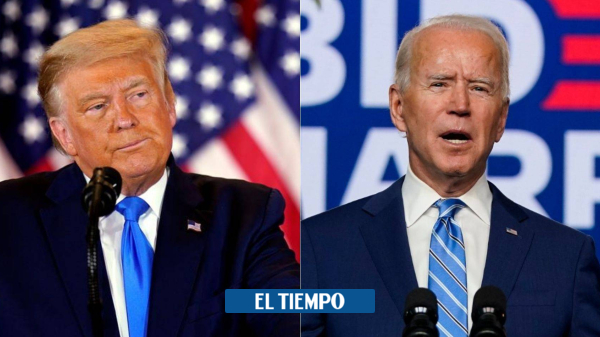 United States President Joe Biden criticized his predecessor, Donald Trump, on Monday for not having acted during the storming of the Capitol which he called “medieval hell”. The president pointed out that Trump “lacked courage” to stop the protesters.

(You may be interested in: “The United States will not enter a recession”: President Joe Biden)

“The brave law enforcement officers were victims of a medieval hell for three hours, dripping blood, surrounded by carnage, face to face with the crazed crowd that believed the lies of the defeated president,” Biden said on the sidelines of a conference of an organization of African-American police chiefs.

“For three hours, the defeated former president of the United States watched it all happen, sitting in the comfort of the private dining room next to the Oval Office.“, said.

See also  Copa Libertadores: Tolima vs Flamengo time and where to watch the game

“He had a decision to make, to position himself with law enforcement or with the mob, and his actions speak for themselves,” said spokeswoman Karine Jean-Pierre, criticizing that the then president limited himself only to seeing what it was happening

The criticism of Trump echoes the conclusion of the House committee investigating the Jan. 6, 2021, attack on Capitol Hill.

(Read more: USA: Chaos at Dallas airport over woman who fired shots into the air)

Last Thursday that committee accused the former president in prime time of having refused to stop or condemn the violence.

At that hearing, it was proven that Trump decided not to immediately stop the attack because it suited him and instead spent the afternoon watching it on television, until three hours later, at the pleas of his close circle, he issued a message telling them to leave.

Biden has praised the police at a time when Republicans are criticizing him for the increase in violence in the country and a few months before the mid-term elections in November, in which it is estimated that the Democratic Party will be harmed.

USA: which states apply the death penalty and what crimes do they punish?