Al-Ali is the champion of the “50th year” cycling race 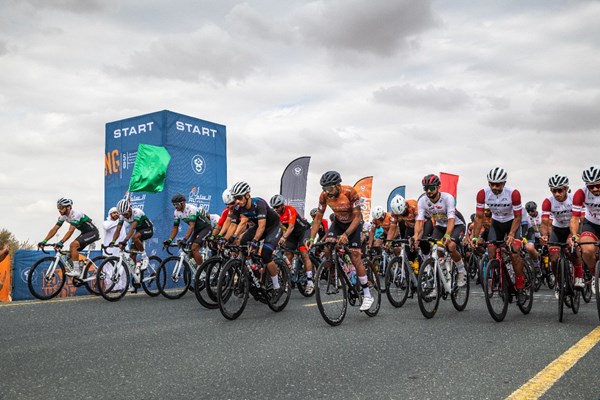 Ibrahim Al Ali of Dubai Police won the first place in the second fiftieth year for Emirati amateurs, as part of the sixth edition of the Al Salam Cycling Championship, organized by the Office of His Highness Sheikh Mohammed bin Rashid Al Maktoum – for Procurement and Finance. The lead came after a fierce competition, which was decided by a difference of centimeters at the finish line, ahead of Majed Abdel Rahim from the Trek M7 team, who came in second place, while Faisal Al Shehhi of the Al Shafar Jumeirah team won third place.
The race was strong, amid a distinguished performance of 100 competitors, over a 137 km course in the Salam area in the Al Marmoom Nature Reserve in Dubai, with an average speed of 49 km per hour, despite the strong side winds.
On the other hand, tomorrow, “Monday”, will be held the Elite Women’s Race, which extends for a distance of 124 km in Seih Al Salam, and will witness the participation of 82 contestants from 22 nationalities from 16 teams, namely: the team of the office of His Highness Sheikh Dr. Sultan bin Khalifa bin Zayed Al Nahyan, Police Dubai, Saudi national team, Bahrain national team, Kuwaiti team, Shabab Al Ahly, Wash, Al Bateen, Al Shafar Jumeirah, Cycle Zone, Yasi, Abu Dhabi Cycling, Cycling Hub, Salam Bike, Expo 2020 Dubai team and Life Spark.
Omair bin Jumaa Al Falasi, Chairman of the Higher Organizing Committee of the Peace Cycling Championship, extended his deepest thanks and gratitude to His Highness Sheikh Mohammed bin Rashid Al Maktoum, Vice President and Prime Minister of the UAE and Ruler of Dubai, may God protect him, for his sponsorship of the championship, praising the performance of the participants who They had a great race, despite the strength of the side winds, which revealed the tactical capabilities of the teams and individual riders to deal with the wind challenge, and to continue the competition journey to the end, which confirms the high level of our riders and their technical and physical expertise that enables them to compete and compete in it with full merit.
Ibrahim Al Ali, the Dubai Police rider, the champion of the second fiftieth year of the UAE amateur race, thanked His Highness Sheikh Mohammed bin Rashid Al Maktoum, Vice President and Prime Minister of the UAE and Ruler of Dubai, may God protect him, for organizing this distinguished race annually, as well as to The organizing committee of the race for its efforts in presenting everything that is new in each version and gave Al Ali the victory of this race to His Excellency Lieutenant-General Abdullah Khalifa Al Marri, Commander-in-Chief of Dubai Police, and considered him “the man behind this achievement”; Due to his continuous efforts and support to the team.
Regarding the details of the exciting former, the Dubai Police rider said: “The race was very difficult in light of the intense competition with the “Turk M7” team riders, who made a great effort at the beginning of the race and succeeded in imposing their control on its early stages, before the Dubai Police team riders succeeded. To regain the lead later and maintain it until the end of the race and win first place at the individual and team level.”
Al Ali confirmed that the strong winds had a great impact on the course of the race, and also affected most of the runners, but the riders of the Dubai Police team succeeded in overcoming this obstacle and taking the first place in their favour.

Coronavirus The next variant could be far more dangerous than omicron, experts in the Observer warn