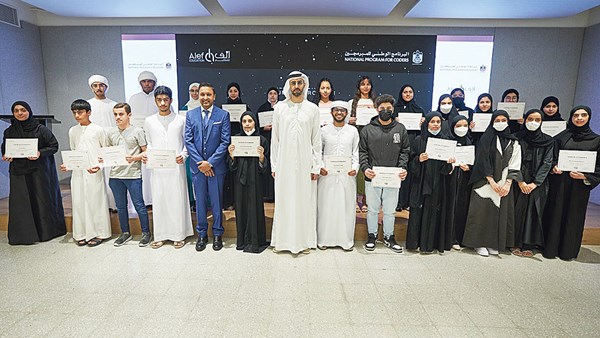 Alef Education, in cooperation with the Programmers Headquarters, one of the initiatives of the National Program for Programmers supervised by the Office of the Minister of State for Artificial Intelligence, Digital Economy and Remote Work Applications, concluded the second edition of the programmers’ summer program with a ceremony honoring outstanding talents in the field of programming, which attracted more than 1,800 Participants from different schools in the country and from more than 20 different nationalities.
The program, which ran from July 25 to August 2, aimed at laying the foundations for smart learning based on technical innovations, ensuring the development of future skills for future generations, promoting innovation among young people and students and motivating them to build their capabilities in the areas of programming and new digital languages, by participating in sessions Virtual interactive, which contributes to achieving the goals of the UAE government and enhancing student participation in advancing the digital economy.
Commenting on the successful conclusion of the summer program, His Excellency Omar Sultan Al Olama, Minister of State for Artificial Intelligence, Digital Economy and Remote Work Applications, stressed that preparing young generations by relying on the foundations and skills of the future and enriching their knowledge of artificial intelligence mechanisms and programming constitutes a cornerstone and sustainable approach for the UAE government, including It ensures the development of the digital future in the country in line with the objectives of the strategy of the National Program for Programmers in supporting programmers, major international companies and the academic sector, forming a comprehensive global digital platform and preparing a generation of trainers and experts to enrich initiatives aimed at developing the efficiency of national talent.
For his part, Jeffrey Alfonso, CEO of Alef Education, stressed the importance of partnership and cooperation with the programmers headquarters and the importance of this in capacity building and developing young talents.