The delegation of “WAM” discusses strengthening cooperation with the Brazilian media 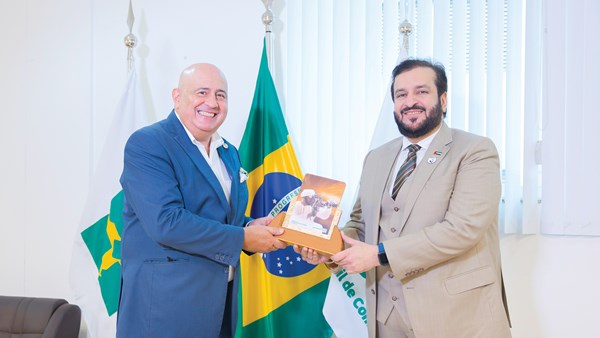 A delegation from the Emirates News Agency “WAM” discussed ways to enhance joint media cooperation and news exchange with a number of Brazilian media. This came during the visit of a delegation of “WAM” headed by Mohammed Jalal Al Raisi, Director General of the Emirates News Agency, to a number of media institutions in the Federative Republic of Brazil.
The visit follows the signing of a joint cooperation agreement at Expo 2020 Dubai last December between the Emirates News Agency and a number of major institutions and television channels in Latin America. The WAM delegation began its tour by visiting the Banderas Media Group, which is one of the oldest media entities in Latin America, and was founded in 1937 and owns television stations, with viewing levels of about 55 million viewers, in addition to radio stations and printed newspapers. The agency delegation was briefed on the working mechanisms of the group, and discussed the possibility of future cooperation, especially that the group will be the main official carrier in Brazil for the FIFA Club World Cup, which will be held in the capital Abu Dhabi next February.
The delegation also visited the headquarters of the Arab-Brazilian Chamber in Sao Paulo and was briefed on the Chamber’s work, and listened to an explanation of the Arab Brazilian News Agency (ANBA). During this visit, a cooperation and news exchange agreement was signed with the Agency.
The delegation visited the headquarters of the Brazilian National News Agency EBC in the capital, Brasilia. This agency is one of the most important news sources and feeds thousands of regional, international and local newspapers with news. A cooperation and news exchange agreement was signed, which will allow providing more media content about the UAE in these media outlets.
The agency’s delegation also met with the Brazilian Estado News Agency to get acquainted with the best media services it provides, and they discussed ways of future cooperation to benefit from these services in the interest of media exchange and cooperation between the two parties. The delegation visited the Fulha Media Group, which is one of the largest major media conglomerates in Brazil, founded in 1921 and headquartered in Sao Paulo. The delegation held a dinner party in Sao Paulo for a number of media institutions and influencers in the media sector. They exchanged views and discussed ways to enhance news exchange and media cooperation.
Mohammed Jalal Al Raisi, Director General of the Emirates News Agency, stressed that the UAE and the Federal Republic of Brazil are linked to a fruitful strategic partnership in all fields that enjoys the support and care of the leaderships of the two friendly countries, expressing his happiness with this visit, which comes within the framework of the Emirates News Agency “WAM” keenness to build bridges of cooperation. And partnership with the Brazilian media in various fields.
He pointed out that the strategic partnership between the agency and these institutions will contribute to increasing media coverage of the UAE in Brazil and increasing news content about Brazil in the Emirati media. It is also an important step in the media sector to support efforts to build solid strategic relations in all sectors, stressing that The media sector is an important element for establishing an economic, cultural and societal system that adopts facts and increases knowledge among peoples. Al Raisi added: We look forward to the participation of the Brazilian media in the World Media Congress, which Abu Dhabi will host its first session next November, and to work together to benefit from this important global platform to explore broader prospects for bilateral media cooperation, which contributes to enhancing the media services provided in both countries.
Al Raisi extended his thanks and appreciation to all those in charge of the country’s embassy in Brasilia and the country’s consulate in Sao Paulo for providing full support to the agency during its visit, which had a great impact on the success of this visit and the achievement of its goals.

Nor does it need them: Nintendo will not buy studios like Xbox and PlayStation