Sultan bin Ahmed Al Qasimi: The achievements of the University of Sharjah are pioneering 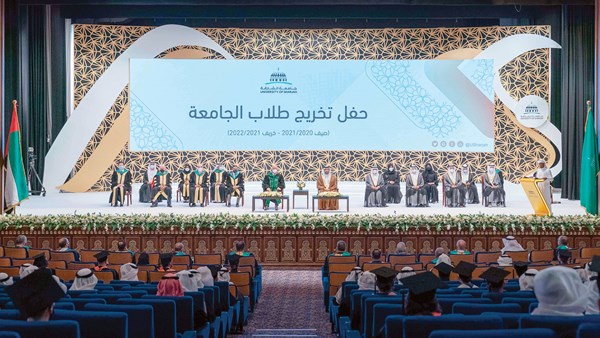 His Highness Sheikh Sultan bin Ahmed bin Sultan Al Qasimi, Deputy Ruler of Sharjah and President of the University of Sharjah, praised the achievements made by the university throughout its pioneering career, in the scientific, academic, research, administrative and other fields, which brought it to high international ratings. This came during His Highness’ speech yesterday at the University of Sharjah’s graduation ceremony, which was held at the University City Hall in Sharjah.
His Highness said, “This is the first graduation ceremony in which I will participate with you in my capacity as President of the University, after the great trust that His Highness Sheikh Dr. Sultan bin Muhammad Al Qasimi, Member of the Supreme Council and Ruler of Sharjah, founder of the University and sponsor of its renaissance and development, sponsored by himself, and made on his own eyes, until I delivered it.” It ranks among the prestigious scientific institutions, and today it has become among the 450 most powerful universities at the global level, according to the assessment of the Times Higher Education International for the year 2022, and it is the first at the state level in medical, health, computer science and its relationship to other disciplines. For the fifth year in a row, the University of Sharjah continues to be the first at the state level in sustainability programs, so it is certain that this position at the local, regional and global levels invites every graduate to be proud.” His Highness the President of the University of Sharjah addressed a speech to the graduates, in which he said, “Your graduation today is a scientific victory for you and a journey of struggle that lasted for a few years, punctuated by a pandemic that affected the whole world, but it did not deter you from fulfilling your wishes. I invite you, on my behalf and on behalf of my fellow members of the Board of Trustees, to be keen on receiving more knowledge and skills in various fields to contribute to the development of your societies and countries. You are on the practical side.
Dr. Hamid Majul Al Nuaimi, President of the University of Sharjah, pointed out during his speech to the university’s distinguished scientific and academic level by obtaining the highest ranks in various international, regional and local classifications, in addition to the great demand for various academic programs, pointing to the number of students reaching last year. 17,500 male and female students in various academic levels and university branches.

great happiness
Graduated Omar Al Masoud, on behalf of his fellow graduates, gave a speech in which he expressed their great happiness at obtaining degrees from the University of Sharjah, which is a leading scientific edifice thanks to the patronage and directives of its founder, His Highness Sheikh Dr. Sultan bin Muhammad Al Qasimi, Supreme Council Member and Ruler of Sharjah. He thanked His Highness Sheikh Sultan Bin Ahmed Bin Sultan Al Qasimi for his kindness to graduate them and to all administrative and teaching bodies and everyone who contributed to their scientific career at the University of Sharjah. His Highness Sheikh Sultan bin Ahmed bin Sultan Al Qasimi presented the graduate students with their certificates, as the number of graduates reached 419 graduates in various undergraduate programs in all colleges except for medical colleges. His Highness the President of the University of Sharjah congratulated the graduates on obtaining their certificates, wishing them success in the next stages of their lives.

Hamdan bin Mohammed: We have high confidence in our employees and in our qualified and talented cadres