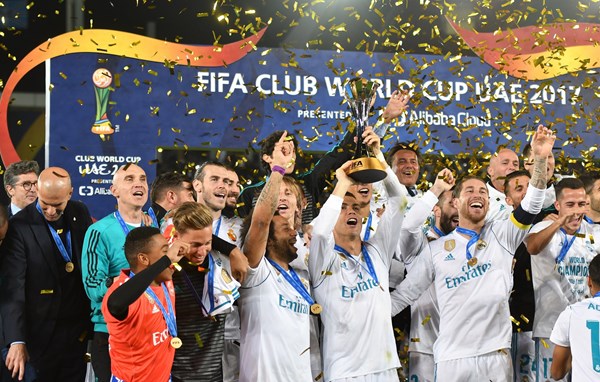 Real Madrid imposed its control over the history of the Club World Cup, as it did in the European Champions League, where the “Royal” is at the forefront of the list of teams most crowned with the “World Cup Club” title, and the “Spanish giant” won 4 titles, which it started a little late in 2014, despite His participation in the first historical version in 2000.
Real Madrid made its own mark when it became the only team that managed to win 3 consecutive championships in 2016, 2017 and 2018, to keep for itself rare, and very special, numbers that perhaps no other team will be able to break them in the near future.
And the situation will not change when talking about the team that has achieved the most victories in the tournament over two decades, because “real” remained at the top as well, winning 10 matches, representing 83.3% of the total matches he played during his five participations, and “Royal” never knew loss. In the “Little World Cup”, where he tied twice, even when he lost the bronze medal in 2000, his confrontation with Mexico’s Necaxa came out with a tie before losing on penalties.
The “Royal” leads the World Cup scene, as it has scored the most goals with 31 goals, and also appeared in the final matches, equal with its rival and compatriot, Barcelona, ​​4 times each.
On the other hand, New Zealand’s Auckland City remains at the top of the list of the most participating in the history of the tournament by appearing in 9 copies, including 7 in a row, and Al-Ahly of Egypt approached it with its current participation in the Emirates World Cup, which is its seventh, and the record at the African level, but the “devils” The Reds” included breaking a record, when playing his 16th match in the history of the tournament, to end the partnership with Auckland, after they were previously equal in 15 matches across all participations.
Legendary Cristiano Ronaldo is the tournament’s historical top scorer with 7 goals, scored with his teams Manchester United and Real Madrid, and Luis Suarez remains the most prominent scorer in one copy after scoring 5 goals in the 2015 championship, to win the Golden Boot and Best Player awards, and he is the first to score a “hat-trick.” In the history of the Club World Cup in the same edition, while the two “icons” Messi and Ronaldo are equal in that they scored the most goals in the final matches, with 4 goals each, and German Toni Kroos tops the list of most cup winners, as he achieved this 5 times, by 4 with Real Madrid and before that one with Bayern Munich, while the Egyptian Al-Ahly stars come to the fore in the list of the most played matches with a total of 11 matches, for Wael Gomaa, Hossam Ashour and Mohamed Aboutrika, and the Spanish Pep Guardiola topped the list of coaches most crowned with the World Cup on 3 occasions with Barcelona and Bayern Munich. .

"Pensions" announces the dates for disbursing pensions for 2022

The other liberators: Pietro Sibille opens chapter as the martyr José Olaya