Poland “Awesome Energy” – A couple of thousand people in Warsaw followed Biden’s speech, which sent a strong message to Putin and left no doubt about the unity of the West 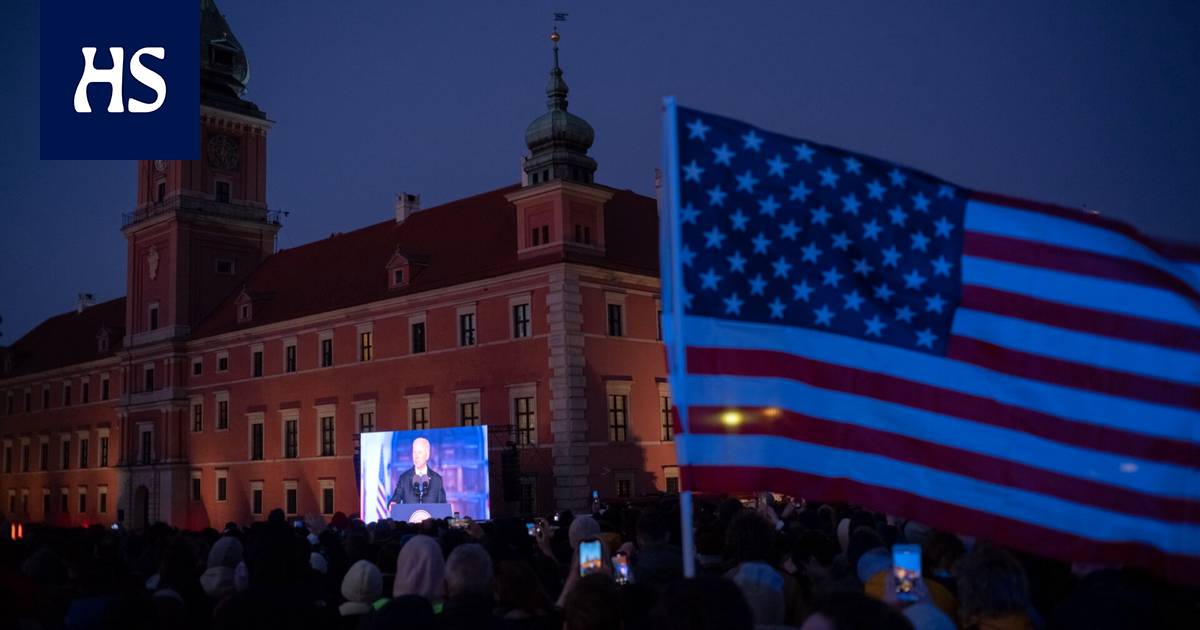 The United States president Joe Biden the two-day visit to Poland culminated in a speech in Warsaw on Saturday night in which he sent a strong message in favor of a democratic world order and peace.

The speech also reflected the recent history of Europe and the experiences of Eastern Europe in the stranglehold of the Soviet Union. Biden said the United States would stand by Ukraine and unwaveringly support its allies in Europe.

“The West is more cohesive than ever before,” Biden said. He piled on the values ​​of Western democracy that Russia is now trampling on, such as the rule of law and freedom of speech.

During his visit to Poland, Biden did not shy away from harsh words about the Russian president who started the war Vladimir from Putin. Putin is a butcher, according to Biden.

In his speech, Biden underlined that Putin had lied many times, including claiming that Russia was not attacking Ukraine and claiming that NATO was threatening Russia.

Biden stressed that Putin was to blame for the war. He warned Putin not to move an inch on NATO soil. According to Biden, Putin cannot continue to lead Russia.

Biden spoke warmly about the refugees he met and assured him that continued support for Ukraine would continue.

Joe Biden immediately gave his historic speech in the courtyard of the Royal Palace in Warsaw. Picture: Brendan Smialowski / AFP

In Warsaw, Biden’s speech was also listened to by many Ukrainians. The audience’s signs featured a picture of Ukrainian President Volodymyr Zelensky, praising the heroes. Picture: Michal Dyjuk

Biden during the speech, the second missile strike of the day took place in Lviv, western Ukraine. Biden visited eastern Poland on Friday, just about 160 kilometers from the scene.

In Poland, fears of Russia moving to NATO soil in the near future are strong. Russia is now facing similar verbal threats to Poland as were previously heard from Ukraine.

Polish researcher Justyna Gotkowska said Friday In an interview with HSthat if Russia does not really experience a defeat in the war now, or if the West makes concessions to it, the threat of an attack on NATO’s eastern bloc in the next few years is real.

Warsaw in the center of the royal castle square, a couple of thousand people watched Biden’s speech on a big screen on Saturday night.

Biden promised that Ukrainians could count on US help. He mentioned humanitarian aid and also said the United States was taking thousands of refugees from Ukraine.

Biden’s message to the Ukrainians went straight to the moment, as there are currently 300,000 Ukrainians in Warsaw, and the crowd showed both Ukrainian and Belarusian flags.

“It was a good speech with great energy. I wished I had finally seen him, but I only saw him on screen, ” Natalia Macutkiewicz said after the speech.

According to Macutkiewicz, Biden was at the heart of the matter when he talked about Ukraine.

“After all, this visit is about the war in Ukraine.”

People rushed to hear Biden’s speech and many were disappointed not to see the President of the United States in nature. Picture: Michal Dyjuk

Poland has received two and a half million refugees from Ukraine, equips Ukraine vigorously and wants to do more for Ukraine together with other Western countries.

Already on Friday and Saturday, on the streets of Warsaw, it was clear on Saturday that Biden’s visit to Poland for as long as two days was a welcome show of support in a country that was now threatened by the war in Ukraine.

Citizens were on the closed streets waiting well in advance for them to see Biden’s car convoy.

“A year ago, I didn’t believe in the unity of NATO, but now I do,” said a Pole Pyotr Sladowski on saturday. He had brought his son to look at police cars on Biden’s route.

Due to the experiences of World War II, many Poles still fear that the country will be left alone when the war breaks out.

Doubts have sometimes been spread about NATO’s desire to defend its eastern bloc, the countries of the former Soviet Union. Now the belief in collective defense does not seem to be shaken.

“It was very significant that Biden visited only 70 kilometers from the Ukrainian border on Friday,” Sladowski said.

“Not only should our Poles be concerned about the spread of the war, but the whole world,” Sladowski said.

See also  Skiing Heidi Weng finally buried her dream of the Olympics: “The dream of revenge was destroyed”

Pyotr Sladowski said recent events have led him to believe in the unity of NATO. In addition to the Ukrainian flag, he had a Polish flag in the stroller with a symbol depicting the fight. Picture: Michal Dyjuk

“Holy obligation. All for one and one for all, ”said the Polish Deputy Foreign Minister Marcin Przydacz In an interview with HS on Friday, NATO’s famous Article 5 joint defense obligation.

Exactly the same phrase was used by Biden on Saturday.

According to Przydacz, Poland wants more U.S. troops on its eastern border, up to 10,000. In addition, it wants to increase pressure on Russia and increase support for Ukraine.

“We will continue to create intimidation for Russia with our most important ally, the United States,” Przydacz said.

Biden the visit to the country, which began on Friday, is a testament to the strength of the alliance, Przydacz said. Poland now speaks very clear language about the war situation.

“European values ​​are not just something that is being discussed over a glass of wine in Strasbourg. They are currently dying for them in Ukraine, ”says Przydacz.

According to him, Putin wants to destroy the democratic way of life in the West.

“The sooner we stop Putin, the better for all of us,” Przydacz says.

Biden flew on Friday from Brussels to Rzeszów in eastern Poland, near the Ukrainian border. In Rzeszów, Biden took selfies and ate pizza with U.S. soldiers who have been in eastern Poland for thousands for a long time.

According to Przydacz, it is 100% clear that NATO would defend Poland and other countries in the eastern bloc if Russia attacked them.

In fact, speculating on the validity of NATO’s Fifth Article, a duty to co-defend, serves only one purpose, he says. Only Russia benefits from questioning the unity of NATO.

Some NATO members have been more cautious in supporting Ukraine than Poland. From a Polish point of view in particular, Germany is dragging too slowly in relation to its size.

Polish from this point of view, Germany delayed arms aid to Ukraine for a long time and is now slowing down the cessation of energy dependence on Russia.

See also  Radar Covid has not worked. But the technology behind it is already preparing the next pandemic

However, after the Russian invasion, Germany decided to provide weapons to Ukraine, increase its own defense spending and freeze the Nord Stream 2 gas pipeline.

After persistent encouragement, he believes Germany is still bowing to cut energy imports from Russia.

Poland decided to increase its own defense budget to 3% of GDP in early March. According to Przydacz, the aim is to increase the share to as much as six percent within a few years.

Poland will have parliamentary elections next year. Support for the government’s main party, the conservative Law and Justice Party (PIS), has strengthened following Russia’s invasion of Ukraine.

Ukrainians Solomia and Roksaliana Dubrovska were waiting for Joe Biden in Warsaw with a critical sign. Picture: Michal Dyjuk

Sleepy Joe, wake up! Wake up, sleepy Joe! The protesters’ sign demanded energy from the President of the United States.

The sign was held on Friday night in front of the Warsaw Hotel Marriott by sisters from Kiev Solomia and Roksaliana Dubrovska.

On Friday night, there were hundreds of people in front of the hotel who either wanted to see Biden’s car or pass him a message.

Solomia Dubrovska says that the text of the poster refers, for example, to the fighters that Poland would like to give to Ukraine, but which NATO, under US leadership, is unwilling to reimburse for Poland.

“I just don’t understand why it takes so long.”

The siblings came from Kiev to Warsaw less than three weeks ago. The escape from the middle of the war was broken by bus, walk and car. Their parents are in New York and their uncles are on the front lines in Ukraine.

When asked where their families are elsewhere, Solomia Dubrovska responds: “In Kharkov, Odessa, Mariupol, Lviv, Kiev. We all have the same family now. ”

He is a psychologist by profession, and he is considering returning to Ukraine before the possible end of the war to help other Ukrainians.

“It doesn’t feel right to be here,” he says.

War Day in Ukraine: fights for every street in Mariupol

Morbius: the new commercials with unreleased scenes from the series have been leaked