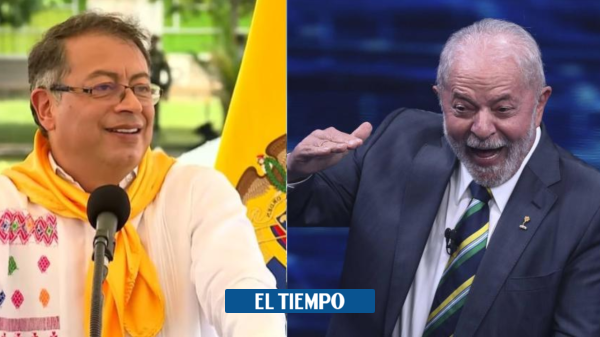 Luiz Inácio Lula da Silva celebrated the election of Gustavo Petro as president of Colombia for his political and ideological affinities and the Colombian was even more effusive after the victory of the former union leader in the October presidential elections in Brazil, but oil exploitation opposes them.

While Petro advocates reducing dependence on oil and even suspending the exploitation of hydrocarbons in Colombia, Lula considers the idea “unrealistic” and has made it clear that the oil giant Petrobras will once again be a privileged tool in his third presidential term..

(Keep reading: This is the ‘prison regime’ to which gang members will be subjected in El Salvador)

Lula is not only proud of the achievements of Petrobras in his first two terms in office (2003-2010), such as the discovery of the coveted pre-salt reserves and the self-sufficiency of fuels guaranteed by Brazil, but he also has among his most iconic photographs one in the who wears the uniform of the state and shows his hands stained with oil.

The president-elect already has plans to strengthen Petrobras, in the face of the dismantling promoted by the far-right Jair Bolsonaro with the sale of dozens of assets of the state-owned company, and to use the company as a tool to promote investments, not only in the oil sector but also in social and environmental.

Lula also considers that oil will continue to be important in the energy matrix for many years and that Brazil, currently the world’s ninth largest producer, has to take advantage of the wealth of its reserves as long as it can.

For this reason, he described as “unreal” Petro’s proposal to create a “great coalition of forces that can speak much louder in the global context in the face of the fight against climate change, and to be able to move to decarbonized economies in Latin America.” , productive and knowledge-based”.

The Colombian proposed the creation of a Latin American bloc against fossil fuels whose members immediately stop exploiting oil.

(You can read: The uncertain path that Venezuela has ahead for the presidential elections)

“Petro has the right to propose what he wants. But in the case of Brazil, this is not real. In the case of the world, it is not real,” Lula then replied, in an interview with the magazine Timewhen questioned about the proposal of what will be one of his main ideological allies on the continent.

See also  Roger Federer and the story that few knew

“As long as we don’t have alternative energy, we have to use the available energy. That is valid for Brazil and it is valid for the whole world,” added Lula.

However, Petro insists that the fight against the climate crisis and the salvation of humanity go through the end of fossil fuels despite the warnings of economists about the negative impact that the end of oil exploration and extraction would have on Colombian finances, and yesterday at the COP27 meeting in Egypt, he underlined that position.

(Also: India: How a Tourist Attraction Became a Death Trap?)

“The climate crisis can only be overcome if we stop consuming hydrocarbons, it is time to devalue the industry, with defined dates for its end,” said Petro, who also suggested that the International Monetary Fund (IMF) initiate a “exchange of debt for investment in adapting and mitigating climate change” and that “the world’s private and multilateral banks must stop financing the hydrocarbon economy”.

Lula, for his part, does not rule out betting on the energy transition but clarifies that it is necessary to establish a long-term plan that allows for the reduction of oil consumption to the extent that it is replaced by alternative energies.

Despite the fact that he defends Petrobras investing again in alternative energies, as his government did with ethanol and biodiesel, Lula’s plans for Petrobras are to continue exploring and extracting oil, and even expanding its presence in refining .

The Workers’ Party has made clear its rejection of Petrobras’ current policy of distributing millionaire dividends among its shareholders -including the majority state- and its desire that all company profits be reinvested.

(You may be interested in: Story of the young woman who jumped out of a taxi to try to avoid being kidnapped)

“With the conclusion of the elections, Petrobras resumes its bloodletting. They are preparing the distribution of 50,000 million reais (about 10,000 million dollars) in dividends. We reject this policy that limits its investment capacity and only enriches the shareholders. Petrobras has to serve the people “, affirmed the president of the PT, Gleisi Hoffmann, on Thursday.

Equally rejects the policy of selling assets in non-strategic areas promoted by Petrobras in the governments of Michel Temer and Bolsonaro and that left the state company out of sectors such as fuel distribution, gas transportation and fertilizer production and reduced its participation in refining.

Lula has also criticized the sale of assets and expressed his intention that the company increase its investment in exploitation and invest again in refineries.

Season 5 of "The crown" is coming to Netflix: what time does it come out and what will we see?