In a race dominated by AKKA ASP’s # 88 Mercedes-AMG, the Iron Lynx trio finished seventh taking the points that allow them to take home the championship, despite the opposition of Raffaele Marciello / Felipe Fraga / Jules Gounon, who at times they even had the chance to be the kings of the series.

The joy at Ferrari is completed by the success of Chris Froggatt, who with the 488 of Sky Tempesta Racing wins in Pro-Am, while the Emil Frey Racing resists a puncture and with the Lamborghini # 14 of Ricardo Feller / Alex Fontana / Rolf Ineichen repeats the success obtained in the Silver Class in the Sprint Cup, also taking the Endurance one.

At the start Marciello held the first place from the pole on Earl Bamber, armed with the Porsche # 22 of GPX Martini Racing, while Marco Mapelli took the third position in a frantic race in the first corners. Marciello remained first even after an initial safety car and was unrivaled during the opening stint, carving out a 17 “lead before handing Fraga the wheel in the first pit stop session.

AKKA ASP’s car was chased for most of the first two hours by Porsche # 22, initially driven by Bamber and then by Mathieu Jaminet, but the GPX lost ground to a penalty due to a pit infringement during its second. stopover. Orange1 FFF Racing’s Lamborghini # 63 also received a drive-through for avoidable contact between Andrea Caldarelli and Rinaldi Racing’s Ferrari # 488.

With its rivals hit by various issues, the # 88 Mercedes-AMG was able to stretch further and Fraga reached a 30 “lead during the middle stint, giving the car to Gounon for the final hour in one position. The # 54 Porsche of Dinamic Motorsport did well during the opening phase of the race and overtook HRT’s # 4 Mercedes-AMG in the final pit stop lap, passing second, while the # 32 Team WRT Audi was fourth climb with Dries Vanthoor at the wheel.

With the Mercedes-AKKA ASP first, the pressure on the # 51 Ferrari became important, having to finish at least ninth to get the title. Nielsen started from 11th place and finally entered the top-10 just before the first pit stop session. The Iron Lynx crew regained control during the second hour and found themselves in seventh place at the end of the central stint.

When the last pit stop was completed and Pier Guidi was sent to the track, the team and driver title seemed to be secure. But, as is often the case in Endurance Cup events, the last hour has developed into a frenzied finale. Safety Car at the turning point of 40 ‘, green light just under half an hour from the end, Mercedes-AMG # 88 on the run and Ferrari # 51 in trouble.

The comeback Lamborghini # 63 snatched sixth place 20 minutes from the end, causing moments of nervousness in the Iron Lynx garage in the duel between Pier Guidi and Mirko Bortolotti. Following was her sister # 71 to protect her, but a contact between Antonio Fuoco and Albert Costa (Lamborghini # 163-Emil Frey Racing) caused a puncture and another Safety Car 10 ‘from the end to remove the stopped 488 on the track.

When the race resumed, there was only time for three laps; it must have felt like an eternity for the Iron Lynx who could only afford to lose two more positions. Fortunately, the great expert Pier Guidi took the car home with seventh place, securing his second consecutive Endurance Cup drivers title, as well as a second for Ledogar after his 2016 triumph and a first for Nielsen.

Up front, AKKA ASP took the win and despite the SC, Gounon was never threatened during the finals. Ultimately, he and Marciello finished just four points from the top (down from -23 where they were).

Dinamic Motorsport takes the place of honor with the Porsche # 54 of Engelhart / Bachler / Cairoli, while the Audi # 32 of the WRT Team finished third during the final stint. Crucial move by Vanthoor, as he ensured that the Belgian team finished one point ahead of Iron Lynx in the title fight between the teams, adding this crown to that of the Sprint Cup.

Bortolotti overtook Nico Bastian (Mercedes # 4-HRT) on the last lap to take fourth place, while the Lamborghini # 114 of Emil Frey Racing is sixth thanks to Jack Aitken, who was behind the wheel for the final stint, with behind Ferrari # 51, Lamborghini # 163 and Porsche # 22.

The # 87 Mercedes-AMG completes a perfect day for AKKA ASP by taking the victory in the Silver Cup with the trio Gachet / Drouet / Tereschenko. Team WRT’s Audi # 31, Toksport WRT’s Mercedes # 7 and Attempto Racing’s Audi # 99 are right behind. The latter was still chasing the class title before the start and had little hope during the opening stages when Emil Frey Racing’s # 14 Lamborghini ran into trouble.

After having a significant advantage in the class standings, a puncture during the first 15 minutes caused the Toro’s car to fall in the rear and with a mountain to climb. Meanwhile, the Audi-Attempto was leading the category but ultimately couldn’t fight for the victory it needed and slipped off the podium during the final stint. This means that the Feller / Fontana / Ineichen trio takes the title. 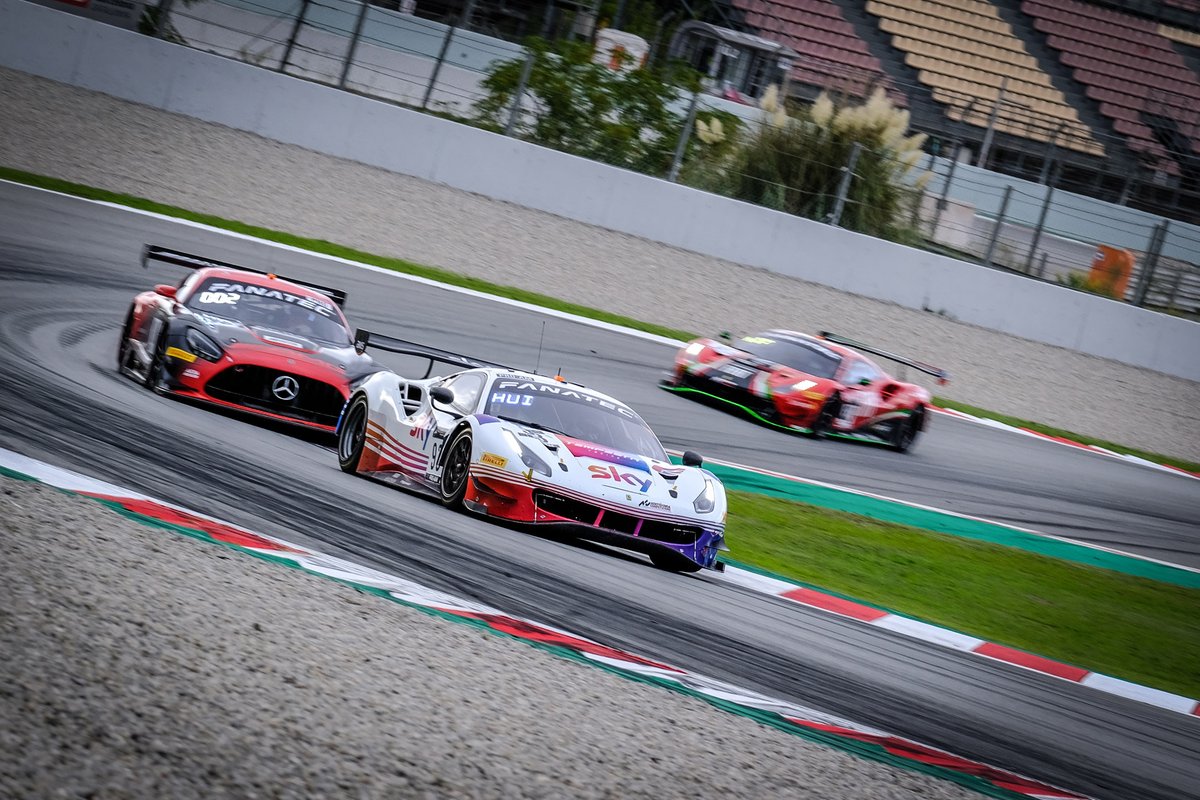 Sky Tempesta Racing took the Pro-Am team title, while Chris Froggatt was crowned driver champion after finishing fourth in the race alongside Jonathan Hui and Rino Mastronardi. The result never seemed in serious doubt, as Orange1 FFF Racing’s # 19 Lamborghini received two drive-through penalties during the early stages of the race. Ferrari # 93 drove until just before closing time, when a penalty brought it off the class podium, a placement enough to secure the title.

The class was won by SPS Automotive Performance (# 20 Mercedes-AMG) after Dominik Baumann overtook AF Corse’s # 52 Ferrari with 50 ‘to go. The latter was forced to make one more stop during the final safety car period, allowing the # 77 Lamborghini of Barwell Motorsport to capture second place. Last place on the Pro-Am podium went to Oman Racing Team in his # 97 Aston Martin.

Side note: both new cars in the race completed the 3h. The Audi R8 LMS GT3 Evo II returned home in 10th place overall thanks to the Saintéloc Racing team; being an invitation entry, it was not eligible to take points, as was the BMW M4 GT3, 16th overall and at full speed.

“Then go”: How the Wagenknecht dispute could cost the left the strength of the faction