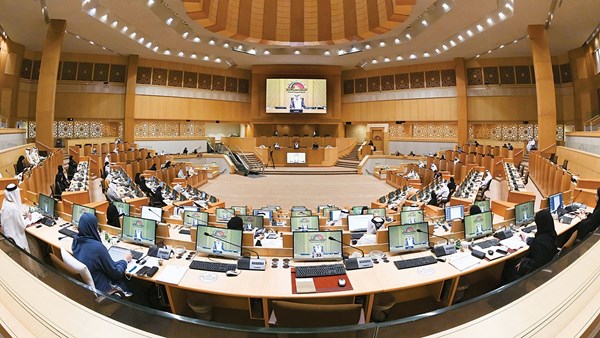 His Excellency Saqr Ghobash, Speaker of the Federal National Council, affirmed that the Council, during the course of the past 50 years, accompanied the civilized renaissance and comprehensive development of the UAE, raising the issues of the country and seeking the needs of citizens, bearing the responsibility of the responsibility with a national will that stems from the values ​​of loyalty and belonging and the cohesion of the leadership and the people in consolidating the pillars of development sustainable development throughout the country in light of our blessed federal path, embodying the vision of the wise leadership to create a bright future in a country that does not know the impossible.
On the occasion of the 50th anniversary of the founding of the Federal National Council, His Excellency extended his highest thanks and appreciation to His Highness Sheikh Khalifa bin Zayed Al Nahyan, President of the State, may God protect him, and to his brother, His Highness Sheikh Mohammed bin Rashid Al Maktoum, Vice President and Prime Minister of the UAE and Ruler of Dubai , may God protect him, and their brother, His Highness Sheikh Mohamed bin Zayed Al Nahyan, Crown Prince of Abu Dhabi and Deputy Supreme Commander of the Armed Forces, and their brothers, Their Highnesses, members of the Supreme Council and Rulers of the Emirates, for their constant keenness to empower and enhance the role of the Federal National Council to be a supportive and supportive authority for the executive institution in advance the development process.
His Excellency said: “On this national occasion, we recall the great deeds of the late Sheikh Zayed bin Sultan Al Nahyan, may his soul rest in peace, and the founding fathers of the Union, who did everything invaluable to build the edifice of the Union, and made the Federal National Council a mainstay in the march of the Union.”
His Excellency emphasized that the Federal National Council presented a pioneering parliamentary experience based on the Shura approach rooted in the UAE society, so that this national edifice stands tall and bears witness to national gains, and provides a model for effective partnership between the legislative and executive authorities. His Excellency pointed out that the Federal National Council has effectively and efficiently carried out its national responsibilities over the past decades, and contributed a large share in building a modern, well-known state by exercising its constitutional powers. His Excellency said, “The UAE has begun a new phase for the next fifty years, and on this occasion, we renew the commitment of the Federal National Council to continue its national role in the process of building and the comprehensive and balanced renaissance witnessed by the state through the exercise of its legislative and oversight powers, inspired by the principles of the Fifty-Year Document, which enhances the system of civilized values ​​based on peace. Peace, dialogue, tolerance, coexistence and human solidarity, and its ultimate goal is to invest in building the Emirati human being, and its goal is a homeland that embraces its people with all security and happiness, building future emirates in the spirit of union, preserving our national heritage, customs and authentic traditions, and building strong foundations for sustainable development for future generations. The Council was keen to implement the vision of His Highness Sheikh Khalifa bin Zayed Al Nahyan, President of the State, may God protect him, since His Highness assumed the reins of government, as parliamentary and political life witnessed progressive and pivotal transformations based in their entirety on a gradual national program that embodies His Highness’s thought based on strengthening the principle of Shura. In light of expanding the participation of citizens, activating its role within the framework of upgrading national work, and supporting the policy of the United Arab Emirates internally and externally.

The UAE is a global leader in health services