Biden holds crowd acts as infections rise in his surroundings 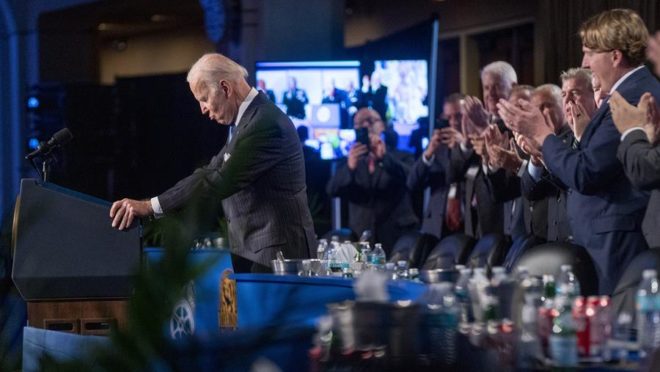 0
SHARES
2
VIEWS
Share on FacebookShare on Twitter
Joe Biden with local US construction trade leaders at the North American Construction Unions Legislative Conference this Wednesday: “Covid-19 is not over, but it no longer controls our lives”| Photo: EFE/EPA/SHAWN THEW

Covid-19 infections are growing around the President of the United States, Joe Biden, who, however, chose to continue carrying out acts with many people in the White House, in closed environments and with almost no masks.

Two members of Biden’s cabinet announced Wednesday that they had tested positive for Covid-19. Secretary of Justice Merrick Garland and Secretary of Commerce Gina Raimondo revealed their respective infections after participating in two highly attended events in recent days. Shortly after those announcements, Biden attended an event with dozens of people, most without masks, to sign a bill to reform the Post Office.

There were almost no face masks in the White House on Tuesday, too, when about 200 people gathered to witness speeches by Biden and former President Barack Obama (2009-2017). Also present at the event was Vice President Kamala Harris, whose communications adviser Jamal Simmons also tested positive on Wednesday after having been in “close contact” with her, the White House confirmed.

See also  Tragedy that killed 132 may have been intentional

However, Harris plans to continue his public agenda because the US Centers for Disease Control (CDC) no longer requires these close contacts to self-isolate in case symptoms develop, according to his office.

In addition, Biden’s two spokeswomen, Jen Psaki and Karine Jean-Pierre, have been infected since late March, as have dozens of journalists, congressmen and others who attended the Gridiron news club dinner last Saturday.

Cases in Washington D.C. have increased by 53% in the past two weeks and continue to rise, averaging 93 a day, although they are still far from the peak of more than 2,000 recorded in early January, according to the New York Times count. .

Health officials are concerned about a possible increase in infections due to the BA.2 subvariant of the omicron, but have not reinforced their recommendations to Americans.

Biden, who avoided large crowds during his election campaign and his first year in office, has made no secret of his desire to mingle with people again, one of his favorite aspects of political life. “This is the biggest crowd we’ve had since I got here,” he celebrated with a smile on March 15, during an event packed with attendees indoors.

His spokeswoman, Jen Psaki, assured on Wednesday, at a press conference, that the White House continues to take “strict” precautions, including “ensuring that anyone who meets the president passes a test first”.

That requirement doesn’t necessarily extend to all guests invited to public events at the White House, Psaki clarified, before noting that when you’re vaccinated with a booster shot, symptoms of an omicron variant infection are usually “mild.”

Biden, 79, received his fourth dose of the Covid-19 vaccine last week – the second booster – and his last coronavirus test came last Monday, with a negative result.

“Covid-19 is not over, but it no longer controls our lives,” Biden said before taking the fourth dose.

Why the new Covid variants are so difficult to spot