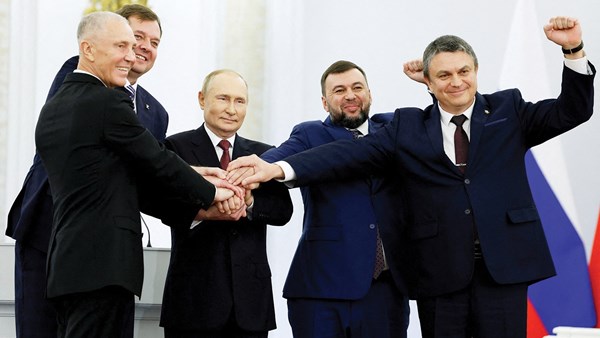 Yesterday, during a concert on the occasion of Russia’s annexation of four southern and eastern Ukraine regions, Russian President Vladimir Putin pledged that his country would achieve victory in its 7-month-old military campaign, while Ukrainian President Volodymyr Zelensky announced an urgent and sudden request to join NATO. NATO,” and ruled out holding talks with Putin after Moscow announced the annexation of the four regions.
The concert was held, in the shadow of the Kremlin walls, to celebrate Russia’s annexation of the Donetsk and Lugansk regions (east), Zaporizhia and Kherson (south) to southern and eastern Ukraine. Putin had signed the annexation documents a few hours ago at a ceremony in the Kremlin.
Around him stood leaders of the Russian-backed administrations in these provinces, with the multicolored spiers of 16th century St. Basil’s Cathedral in the background, said Putin, the people in the regions had chosen to return to their “historic nation.”
He added that Russia will make every effort to support them, enhance their security, and rebuild their economies.
“Welcome home!” he said, to chants of “Russia! Russia!” From the flag-waving crowd in the sprawling plaza.
Kyiv and the West denounced the “referendums” held by Moscow in the four regions, while declaring not to abandon efforts to expel Russia from the territories it controlled.
Zelensky signed the application papers to join the Western military alliance, in an online video, which was apparently intended to respond to the Russian celebrations in Moscow of declaring the four regions new Russian territories.
“We are taking a decisive step by signing a Ukrainian application for rapid accession to NATO,” Zelensky said, in the video he posted on the Telegram app.
In the video, Zelensky appeared in military fatigues, with the prime minister and parliament speaker standing next to him as he signed the application document.
The announcement is likely to strike a chord in Moscow, which portrays the Western alliance on the home front as a military alliance against Moscow.
Before Russia sent its armed forces to Ukraine in February, Moscow was demanding legally binding guarantees that Ukraine would never join the US-led defense coalition.
In his speech, Zelensky accused Russia of rewriting history and working to change the region’s borders, something he said Kyiv would not allow. But he added that Kyiv remains committed to the idea of ​​coexistence with Russia “on the basis of parity, honesty, dignity and justice.”
“We are ready for dialogue with Moscow, but with another president of Russia,” Zelensky said.
He pointed out that while Ukraine is waiting for a consensus among NATO member states, his country could be covered by protection under Kyiv’s draft security guarantees, known as the Kyiv Security Pact, which Moscow had previously objected to.
“We understand that this requires the unanimity of all members of the coalition, and therefore, until that happens, we propose to implement our proposals regarding security guarantees for Ukraine and all of Europe in accordance with the Kyiv Security Charter,” he said.
Yesterday, NATO Secretary-General Jens Stoltenberg denounced Russia’s annexation of the four regions, stressing that the allies will never recognize that these territories are part of Russia.
“Ukraine has the right to recover these territories,” Stoltenberg said at a press conference in Brussels after President Vladimir Putin formally signed the annexation of the four regions.
He also stressed NATO’s refusal to participate directly in the conflict between Ukraine and Russia.
For his part, US President Joe Biden said that Russia’s annexation of the four regions was an indication that he was facing difficulties, warning Moscow that Washington would defend “every inch of NATO territory.”

New US sanctions against Russia
Yesterday, the United States announced “severe” sanctions against Russia, in response to its annexation of four regions located in southern and eastern Ukraine.
In a stern warning, the United States said it would, in agreement with the Group of Seven, impose sanctions on “any country, individual or entity” that provides support to Russia’s attempts to seize territory in Ukraine.
At the same time, the G7 countries, which include Germany, France, Italy, Japan, Canada, Britain and the United States of America, affirmed in a statement yesterday that they “will never recognize the annexations.”
The new announced sanctions, which are added to a large series of sanctions, affected all sectors in Russia, and mainly target Russian officials and the defense industry, according to statements by the White House, the State Department and the Treasury Department.
The sanctions particularly affect members of the State Duma, the lower house of the Russian parliament, the Federation Council, the Senate, government officials, and service providers to the Russian army.

Russian veto against Security Council resolution on annexation
Yesterday, Russia used its veto to prevent the adoption of a UN Security Council resolution condemning its annexation of four regions located in southern and eastern Ukraine, while China abstained, and three other countries did the same.
The draft resolution prepared by the United States and Albania was supported by ten member states, with four abstentions: China, India, Brazil and Gabon.
The Russian veto was certain, but the Western powers will now seek to put the draft resolution to a vote in the General Assembly, which includes all member states of the United Nations.
“This is exactly the task for which the Security Council was created,” said US Ambassador to the United Nations, Linda Thomas Greenfield, at the beginning of the meeting. Defending sovereignty, protecting territorial integrity, and promoting peace and security.
For his part, Russian Ambassador Vassily Nebenzia considered that seeking to convict a permanent member of the Security Council is unprecedented. “Do you seriously expect Russia to consider and support such a project?” he said. And if this is not the case, it turns out that you are intentionally pushing us to use the veto, only to say later that Russia is abusing this right.”

See also  Is the Samsung Galaxy S21 FE still in time, now that the S22 is almost out?

“The choice has been made! Together forever!"