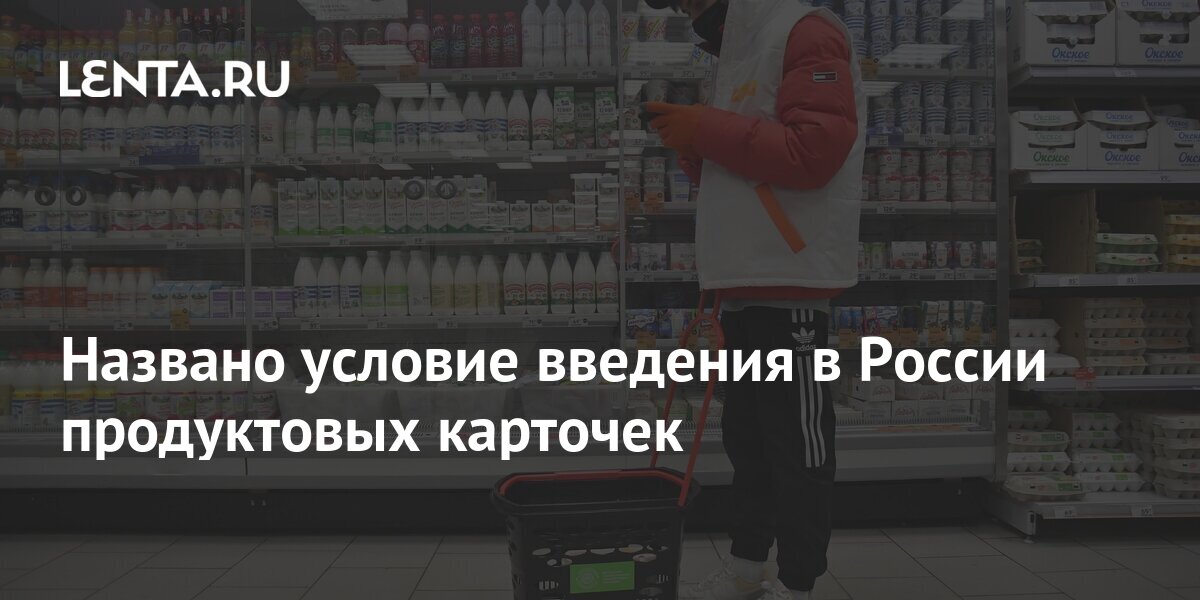 Ruslan Grinberg, Scientific Director of the Institute of Economics of the Russian Academy of Sciences, in an interview with RIA News named the condition under which grocery cards can be introduced in Russia.

According to the economist, this could happen if food prices rise.

As for consumer prices, if their growth continues or accelerates, the government will either have to start subsidizing the production of the most important products, or it will become necessary to introduce food ration cards in Russia.

Shame in the minds of Russians

As Greenberg pointed out, this practice is used in many countries, including the United States, “there are millions of them, and nothing.” He explained that in Russia there is a different attitude towards food ration cards. “In the minds of Russians, a food card is a shame,” said the economist.

The introduction of food ration cards in Russia has been discussed by officials since the late 2000s. In 2014, the Ministry of Industry and Trade came up with a proposal to create an additional food system for low-income citizens. It was supposed to credit funds to special cards, which can only buy food of certain positions.

Amid the economic crisis caused by the coronavirus pandemic, discussions on the idea have resumed. So, in December 2020, the head of the Commission of the Public Chamber of Russia for the development of the agro-industrial complex, Yulia Ogloblina, considered it necessary to introduce food ration cards and social meals for low-income Russians. The first deputy chairman of the committee on budget and financial markets of the Federation Council Sergei Ryabukhin, evaluating the idea, said that such a step is justified only in the event of a shortage of products.

Three months later, Russian President Vladimir Putin, during a meeting with the heads of the State Duma factions, agreed with this proposal. He noted that the issue of food certificates for the poor is being heard in the government, the idea is already visible and it has advantages.

Soon the Union of Consumers of Russia approached the Ministry of Industry and Trade with a proposal to introduce food ration cards. The idea involved a monthly transfer of an average of three thousand rubles per family and allow money to be spent only on domestic food.

In 2020, deputies of the LDPR faction and senators Sergei Leonov and Ivan Abramov reported that they were developing a bill on the issuance of food certificates to citizens whose average per capita income does not exceed the subsistence level. The amount of aid that could be spent on food was supposed to be 25 percent of the regional subsistence level.

However, in early June 2021, the State Duma rejected the document in the first reading. The government issued a negative review of the initiative and abandoned it. It says that the explanatory note to the draft law does not have a substantiation of the key parameters of the social support instrument, does not allow assessing the prospects for its implementation and the socio-economic effect.

In turn, the Accounts Chamber pointed out that the document looks too declarative, since most of the provisions important for its implementation have a “reference character” or are absent. On this basis, the State Duma’s specialized committee on labor, social policy and veterans affairs recommended rejecting the initiative.

Andrey Konnov, CEO of the Konnov media communications agency, predicted that in 2022 the drop in prices would not be significant and would affect mainly perishable products. To get rid of such a product, retailers will resort to promotions to attract buyers. In addition, new catches will lead to a drop in fish prices.

He added that the value of agricultural products is likely to rise. The rise in prices, he said, is provoked by the policy of the Bank of Russia to strengthen the key rate and sanctions, due to which the ruble exchange rate falls. The reciprocal policy of Russia, which restricts the access of foreign suppliers to the domestic market, also affects.

However, Elena Doronkina, the founder of GetVegetable.com, a service for the delivery of healthy products, believes that the fall in food prices in Russia will affect a much wider range of goods. In her opinion, new harvests and receipts to the warehouses of grocery retail chains will provoke a decrease in prices for sugar, bakery products, butter, cereals and pasta, as well as pork and poultry meat.

The omicron variant triggers the number of covid infections in Asia