Zoology Why does a cat go crazy with catnip? According to a recent study, plant chemicals act as a mosquito repellent 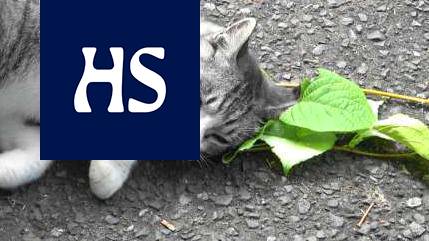 For cat owners the phenomenon is familiar. When you give your pet, for example, a toy stuffed with catnip, it revolves and revolves around the scent in its utter delights.

But why does catnip give cats the power of euphoria? It is a mystery that has been tried to solve for a long time.

Now presented by an international research group in their studythat plant intoxicating chemicals affect cats like heroin in humans.

The chemicals activate the opioid system in the brain, which is involved in regulating emotions, pleasure and pain.

However, pleasure is not the ultimate reason for strange behavior in cats. According to the researchers, cats use catnip as an insect repellent.

The role of iridoids is to protect plants from aphids and other herbivores, but they are also known to make cats feel happy.

Biologist at the University of Iwate, Japan Masao Miyazaki distinguished between genuine catnip (Nepeta cataria) and the Manchurian Vine (Actinidia polygama) of the chemicals is the ingredient that makes cats go wild the most: nepetalactone.

The researchers put nepetalactone and saline in paper bags and offered them to 25 domestic cats for sniffing. Most pets showed interest only in sachets containing nepetalactone.

To ensure ingredient to be correct, the researchers provided nepetalactone to 30 wild cats as well as zoos, lynxes and jaguars living in the zoo.

Whether it was a big or small cat, everyone gathered around paper bags and rubbed their heads against them.

Nepetalactone was also given to dogs and mice, but they were not interested in it at all.

Next the researchers measured the level of beta-endorphin in the bloodstream of cats five minutes before and after sniffing nepetalactone.

Beta-endorphin is a hormone that relieves pain and brings pleasure by activating the body’s opioid system.

The researchers found that the levels of this “happiness hormone” increased significantly after sniffing nepetalactone. The smell of saline did not produce a similar effect.

In addition, the researchers blocked the opioid system in five cats, as a result of which the cats were no longer interested in nepetalactone-filled sachets.

Reason the charm of catnip and Manchurian patch of vine thus seemed clear: it produced pleasure for cats. But were there any other meanings behind the pleasure?

The researchers found that two centuries ago, nepetalactone was widely used as an insect repellent against mosquitoes, for example. They concluded that perhaps wild cats massaged their bodies on plants to protect them from insects.

To be tested this theory, the researchers conducted a similar experiment for cats to test the effectiveness of mosquito repellents in humans. They rubbed nepetalactone on the cats ’heads and placed the head of the funded cat in a mosquito-filled chamber.

Then they watched how many mosquitoes landed on their heads. The researchers found that cats treated with nepetalactone attracted mosquitoes only half the number that teased the cats in the control group.

“Most researchers and pet owners think cats revolve around cat pine because of the euphoric experience. Our finding suggests that spinning also has practical benefits, ”Miyazaki said says Science.

Research was published In Science Advances.

Researchers are not yet sure where feline preference for catnip originated from the beginning. They concluded that the cats accidentally rubbed themselves against the plants, liked it, and therefore continued.

However, it is not clear whether it was a sense of pleasure or an insect repellent effect that made the cats continue.

“Anyone who has followed a hunting animal knows how difficult it is for an animal to stay in place as mosquitoes revolve around them,” Miyazaki says.

“So it’s not far-fetched to argue that getting rid of annoying insects wouldn’t be important for natural selection in the end.”

Legal proceedings The court heard the accused of attempting to assassinate Pekka Kataja: Fingerprints of the accused were found in the attackers’ fake package, but he denies sending political packages