Zidane: Thinking about Liverpool after the “international break” 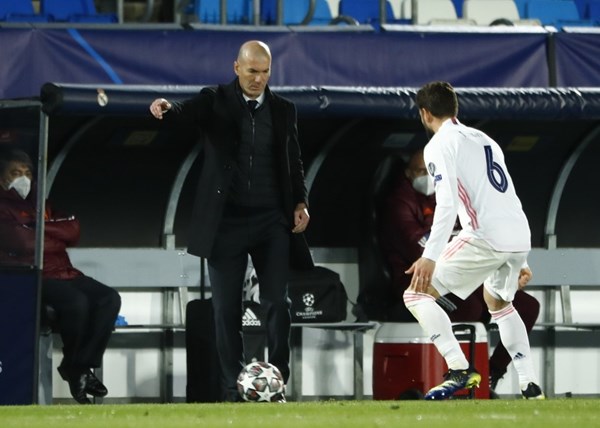 Real Madrid coach Zinedine Zidane said that facing Liverpool requires hard physical effort, after the two teams were drawn on Friday in the Champions League quarter-finals, but he stressed that it would not distract the team from its march towards preserving the Spanish League title.
The European champions will meet 13 times with the English Premier League champions last season, in a repeat of the 2018 final, when Zidane’s team won 3-1.
But with Real occupying third place in the Spanish League, 6 points behind leaders Atletico Madrid, they are also focusing on domestic success when they visit Celta Vigo on Saturday.
Zidane said: We know Liverpool and facing it requires a lot of physical effort, but we will think about that after the international break.
He added: The whole season is hard and we have to think about things day by day, and prepare for anything that happens and know that we are still in the league competition and we want to continue work, every season the last stage is life or death, and I do not focus on the schedule but on the daily work and enjoy ambition Enough.
And between the two matches, Liverpool, Real will play a summit against rivals Barcelona, ​​which may be decisive in the domestic title race.
Eden Hazard misses the visit to Figo due to a muscle problem, to continue his nightmares with injuries in Madrid, and Zidane explained that the club is developing a special plan for the Belgian player’s recovery.
He continued: We want Eden to recover properly and this is the most important thing for us.
Hazard joins the injured list and includes defenders Dani Caravajal, Alvaro Odriozola and forward Mariano Diaz.

Around the world: worrying currency devaluation in Lebanon, Syria and Libya