Zidan: “Real Madrid” is fighting for “La Liga” and “The Champions League” 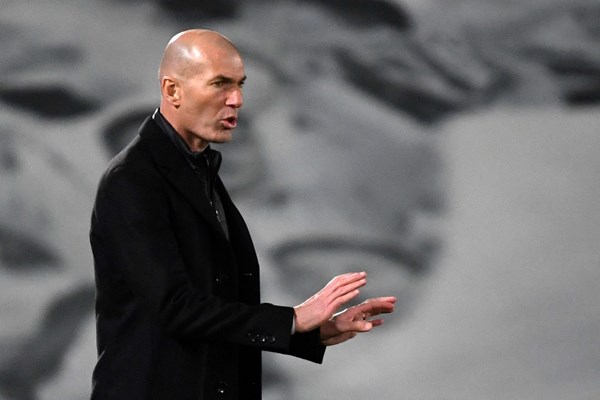 Real Madrid deservedly deserved to qualify for the quarter-finals of the European Champions League, after beating Italian 3-1 at Atlanta in the second leg of the round of 16.
Real Madrid coach Zinedine Zidane expressed his great happiness with his players, and praised them all in a quick dialogue with the correspondent of L’Equipe, and said: We succeeded in playing a big match, and we dominated from start to finish against a competitor who was able to cause inconvenience and trouble for us, as he did in going match.
He added: On paper, the riyal is always the candidate to win, this is on paper only, but on the field the situation is different, and we have not done anything yet, because things will be completely different in the quarter-final matches, and the draw will be difficult whoever is the next competitor, because all teams hope In going to the furthest extent in the tournament, and I hope that the Real Madrid will be in the “best version” in the upcoming tournament matches.
And about the role played by Benzema, Zidane said: Karim since his presence in Real Madrid, and he has been doing great, improving from match to match, season to season, and we do not know when he will stop brilliant and creativity, and I will not talk about the goal that he scored, but I say with the utmost objectivity, He is an exceptional player in everything, his goals, moves, passes to teammates, everything, and it is very difficult to lose the ball, he is an effective striker.
And about the possibilities of Cristiano Ronaldo, Erling Haaland or Kylian Mbappe, reaching Real Madrid next season, Zidane said: So far I do not know anything, but we have Benzema, and we are making good use of his presence with us.
And because Modric appears on the field, as if he was a young man of twenty, even though he is thirty-five, the correspondent of L’Equipe asked him about this veteran Croatian star, and he said: Luca is a very smart player, and this is clearly visible, even if he wanted to become a coach He will succeed with distinction, because he has all the ingredients for this profession, knows football well, and I am very happy with him, and he forms with Toni Kroos a wonderful and understanding duo in the middle.
About his goal with the Real in the next stage, Zidan said: We are doing our best to win the “La Liga” and “The Champions League”, and this is not impossible, and we are present to achieve this goal, and we are fighting for it, and we are still alive in the two championships, and when you know the value and importance of these Both tournaments, it is difficult for any competitor to win you, and when you do something with the players in training, and you see it happen during the match, you are very happy.

Flights from Germany to Palma soar at Easter

Criticism of Beijing over Uyghurs: China imposes sanctions on the British