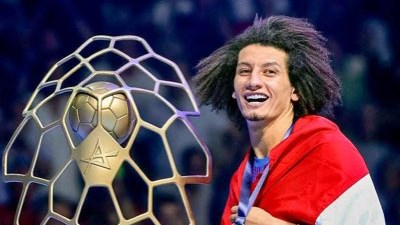 Sharjah (Union)
Sharjah Sports Club congratulated its former player in the handball team, the Egyptian Ali Zain, who moved from the “King Al-Sharqawi” castle last season to professionalism in the ranks of the Spanish club Barcelona, ​​on the occasion of his coronation with the “Catalan” club as champion of the European Handball Champions League 2022 for the twelfth time 11 in the history of “Barca”, after he surpassed the Polish Kelsey, after he won many championships in the castle of the Sharkawy King before his departure.
Muhammad Obaid Al-Hussan, Board Member of Sharjah Club and Head of Team Games Department, pointed out that Ali Zain is one of the best players in their position in the world, and one of the most professional. What has already been achieved during the 3 seasons he spent with the team since 2018, from the French League until the 2021 season, during which he contributed with the system to achieving 11 local and foreign championships, in addition to two bronze medals in the Asian Championship.
He added: We knew from the beginning Ali Zain’s great ambition to play for Barcelona, ​​so when the opportunity came, the club’s management cooperated professionally with the Spanish club’s offer and with the player’s desire to achieve the interest of everyone, and the deal was successfully completed for all parties, and it is wonderful that an Arab player moved from Sharjah Sports Club European Champions League Handball Championship.
It is noteworthy that Ali Zain’s career with Barcelona ended after participating in the Champions League final for handball, and the Romanian club Dinamo Bucharest announced the signing of the Egyptian star on a two-year contract starting next season.