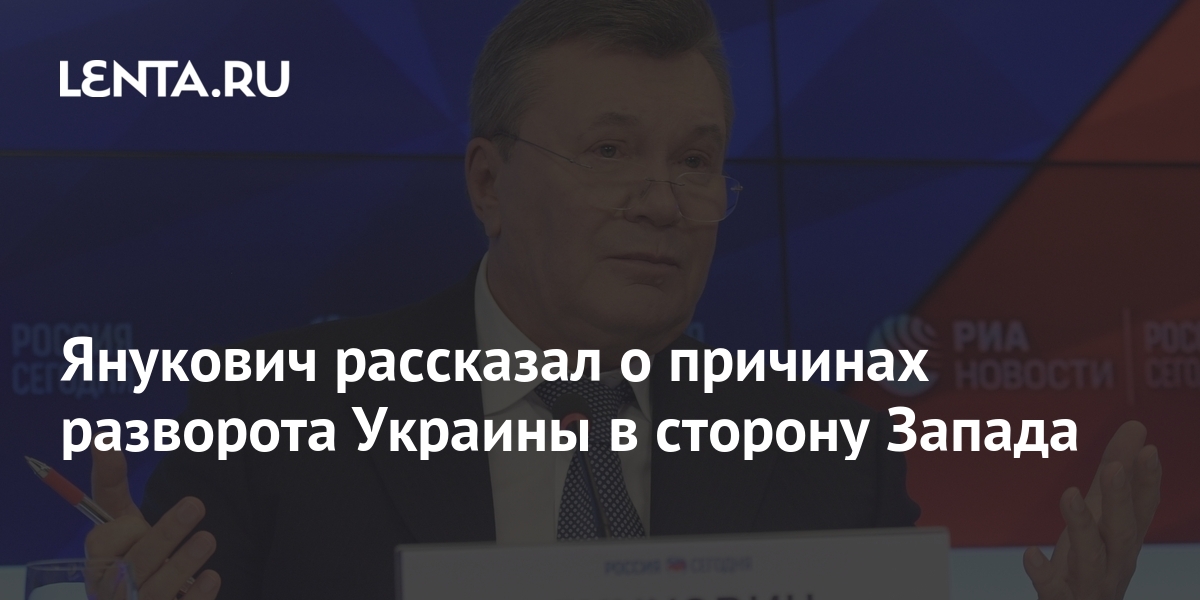 Former President of Ukraine Viktor Yanukovych named the reasons for Ukraine’s turn towards the West. He listed them in an address to the Ukrainian people in honor of the 30th anniversary of the republic’s independence, reports RIA News…

Skirmishes, missile strikes and deaths of children: conflict in Donbass flares up with renewed vigor

Yanukovych said that the “Westernization” of Ukrainian foreign policy took place under pressure from national patriots and Western countries. At the same time, he emphasized that he considered the right decision to make such a change in the country’s foreign policy course. In his opinion, this was dictated by the prevalence of “economic egoism” in relations between the former Soviet republics and the failure of the CIS as a political and economic union.

“There was simply no other way to ensure the national security of our country at that time and, as the subsequent years of our history showed, it was thanks to the multi-vector approach that we maintained internal stability,” the former president concluded.

In his address, Yanukovych called the renunciation of good-neighborliness with Russia the most reckless step by the Ukrainian leadership in 30 years of independence. According to him, this led to a split in the entire Ukrainian society, the growth of nationalism, the persecution of pro-Russian opposition politicians, as well as a deep economic crisis and social instability.

Residents of Donbass are offered to leave for Russia if they do not want to support the violent Ukrainization carried out, oddly enough, by the Russian-speaking leadership of the state, and the residents of Crimea are denied the right to consider the peninsula their homeland

The former Ukrainian leader noted that the country has never managed to gain the status of an independent state, and its foreign policy position is dependent on unstable US-Russian relations. At the same time, he drew attention to the fact that they are expected to deteriorate in Kiev.

“What will we do if detente [американо-российских отношений] will it come? And this will happen without fail. Build a wall on the border with Russia, and now with our Belarusian neighbors? To continue to tire the West with demands to immediately admit Ukraine to the EU and NATO, which, for obvious reasons, it does not want to do? ” – added Yanukovych.

The ex-president also spoke about the origins of the coup d’etat in Ukraine in 2014. In his opinion, they were connected not with the “soft” policy of the Ukrainian leadership, but with the implementation of the project “Ukraine as an” anti-Russia “in the country.

The price of lack of will

Six years ago, Yanukovych fled to Russia. Why did he lose power and doom Ukraine to bloodshed?

He spoke about the growth of internal political tension on the eve of those events and stressed that such a trend could not but end in an open confrontation between the opposition and the authorities. In his opinion, the Ukrainian government did everything to prevent the catastrophe.

“We ensured freedom of speech even in those cases when this“ freedom ”infringed on the foundations of statehood; we did not interfere with the right of the inhabitants of the western regions to erect monuments to those whom they considered their national heroes even at the cost of insulting the historical memory of the inhabitants of the South-East; we did not persecute members of nationalist organizations, believing that they would appreciate the tolerance of the state; we closed our eyes to many things, ”Yanukovych concluded.

Earlier, Russian President Vladimir Putin announced the preparation of the anti-Russia project. In his article “On the Historical Unity of Russians and Ukrainians,” published on the Kremlin’s website, he talked about the connection of such a concept with Ukraine.

In particular, Putin pointed out that this project dates back to the 17th-18th centuries, and its goal is to turn Ukrainian territory into a barrier between Russia and the European Union. According to the head of state, within the framework of such a concept there is no place for a sovereign Ukraine, and the events of 2014 were the result of the corresponding policy.