Xabier Eskurza: “I, in this final, will win” 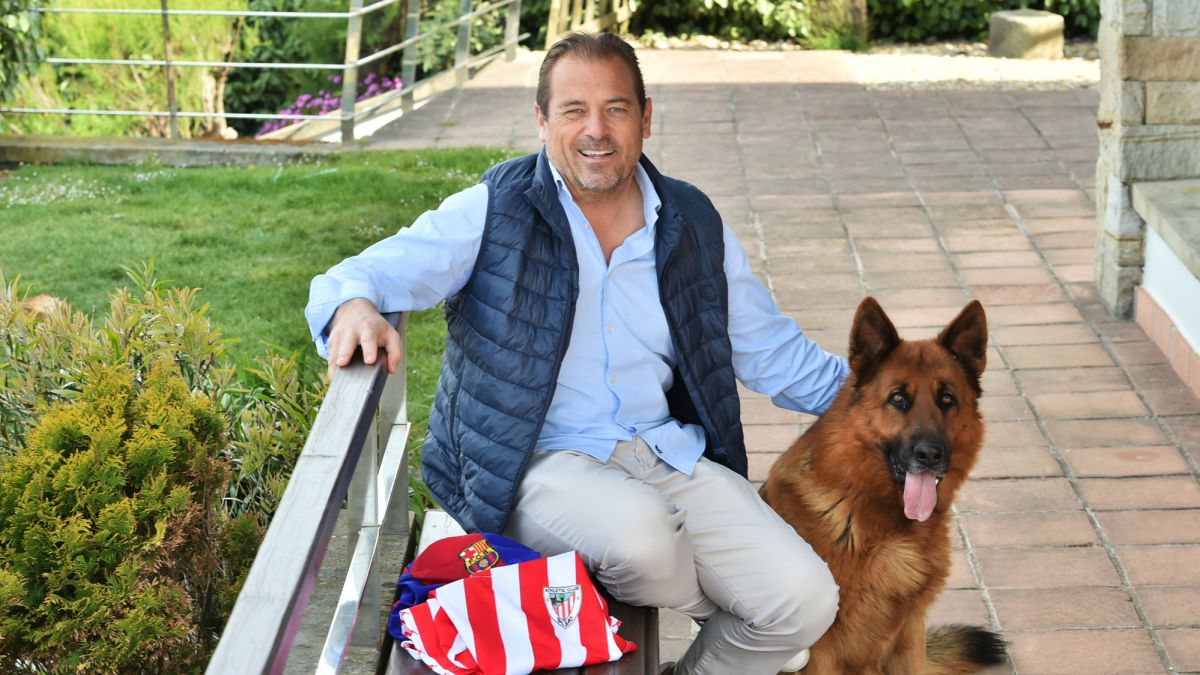 Xabi Eskurza (Trapaga, 17-1-70), played 114 games with Athletic out of a total of 256 between Barça, Valencia, Mallorca and Oviedo, with a Super Cup and a Cup runner-up in his locker, under the orders of technicians of the caliber of Kendall, Heynckens, Cruyff, Cúper, Luis Aragonés and Valdano. The once talented right-handed winger will watch the Cup final with maximum interest from his home in Barrika, in front of spectacular views of the Cantabrian coast. “The fear of losing with Real has hurt us more than not getting excited about winning at Barça”, points out in an interview for AS the current head of a soccer player advisory company, who claims more “heat” from the fans after the slap in the first final between the Real.

There is much talk about that famous Heynckes rhombus, with Eskurza on the right.

I started with Howard Kendall, older than that batch, it was a very good time. I made my debut with Argote, Gallego, Urtubi, I caught that final of the champion team and it was very exciting, but in terms of sport we had a very bad time.

The exchange or barter with Jon Andoni Goikoetxea between Athletic and Barça was something new.

I was caught in the days of the famous formation and retention law. At that time they could keep us until we were 25 years old, and I had that problem. In the end, he was a Trápaga player who wanted to play for Athletic and it seems that this player profile the club had a kind of right of pernada. It seemed that we had to sign what he offered us. I had to go through the hoop until I said enough. At the age of 24, they said that he had a right over me and I did not, after five years with the first team and 15 years in Lezama and the one who earned the least. I understood that my time had come and that I was worth it.

And he decided to leave Athletic.

Yes, my idea was to play for Athletic, but in that situation I decided to leave and I went to one of the teams that, financially, perhaps offered me less, but I was interested in sports. As they were going to retain me, they were forced to put a clause, which they offered me only a third. I was going to stay a year and, seeing options, they considered that the best thing was an exchange with Barça and Goiko.

A staging of the Sheraton Hotel in Brussels with a T-shirt exchange.

I joined in the Dutch preseason with the Athletic tracksuit, then I went to Barcelona without a home or anything. Abelardo welcomed me into his house, who knew him. They let me come to Bilbao to pack my bags. And I did start very well, playing in the Super Cup.

Super Cup that they beat Real Zaragoza in a double game.

We won well at La Romareda, I had adductor discomfort and the doctor told me to rest for the second leg and in the league I started at El Molinón against Sporting. The return leg we lost and we almost lost the Super Cup, but on goal difference, we won. In Gijón, in the second half, I had a tear in the adductor, a complicated injury. I had to operate, four months off and that marked me at Barcelona, ​​and the following season at Valencia, which was still not one hundred percent.

Yes, it wasn’t bad at all, really.

With Héctor Cúper’s Mallorca, you were on the verge of winning the Cup final in 98 at Mestalla and you missed one of the penalties …

Yes, I was also the one who missed the penalty that the Cup awarded to Barça. As a joke, the Mallorca teammates told me that what a bastard, that surely he had a Barça cousin. It was something impressive, very beautiful, and the truth is that we had the Cup in hand after winning, extra time, penalties and in the first five penalties, if Stankovic scored, we won the Cup. He had scored all penalties in the League and in training and, right, failed. If I put it in, we kept shooting and if not, we lost.

Do you see any parallels with the final against Barça this Saturday at La Cartuja, in which Athletic would be Mallorca?

No, they are different. At that time, Barça was a transition team, they weren’t doing so well. I had left three years ago and they had fired Cruyff. Nor is Mallorca Athletic. Football is another and I do not find similarities.

Could the defeat against Real in the previous final cause too much pressure and distress for the lions now?

I see it more in the Athletic fans. The professionals, in the end, are more involved. There was a lot of atmosphere in the week before Real, La Gabarra, everything …, and because the final was not expected, but it was decided in details, just as I missed a penalty and you give it to Barça, you concede a penalty and the Real takes it. More heat was expected towards the players these two weeks. I have seen criticism, I see pessimism, I see that there is nothing to do …, I see the hidden Barge and it gives me that impression. The fear of losing with Real has hurt us more than not getting excited about winning at Barça. I don’t understand it, or maybe now we only live for the moment and the result instead of supporting our team. It seems that we are more if you win and less if you lose. Times have changed and the fan himself.

But Athletic has to play perfect on Saturday and for Barça not to have the night.

Yes, this final is different and more difficult than the Real one. You have to play a perfect game and also Barça is not well. You can beat Real if you play well, with Barça you depend on them. But it can be given, he has already been beaten in the Super Cup with a great game. I continue to trust and I do believe that it can be achieved.

Do you think that Marcelino is going to use the same eleven as against Real?

I think there has to be some change, especially that some important player like Capa is not entering. It can squeeze a lot, give balance back and depth. The defense was one of the best in the Spanish League last season; we have those players that we have to recover and more against Barça. Being solid behind is going to give us a lot.

Any similar Eskurza in this Athletic or Barça?

No, they told me in my time with Jon Andoni Goikoetxea, when we changed for Barça and such, and then that we could be similar players. Now, each one has its peculiarities, its strengths and weaknesses. Apart from the fact that football is more intense now, I was perhaps more of a band, which is not so popular now. Now they are more versatile. Soccer is different.

What is the formula to stop Messi?

Puff, it’s complicated, perhaps the key is not to obsess over Messi, if not where Messi sends the ball and the teammates he has. As long as you pay close attention to him, Jordi Alba or anyone else will put it on you. You have to work on it without obsessing over individualities, but the key is more Athletic than them.

Is Pedri the new Iniesta?

They are different, but the truth is that he is a surprising boy. Iniesta is unique, but not in that style, Pedri is a different player, who seems to not do, it seems that he does not run, that he has no physique and is the opposite. He’s very strong and technically he does amazing things, very complicated things that makes them very simple.

No, no, I’ve been with Athletic since I was little. What I have experienced in San Mamés, no longer as a professional player. A child for which he is moved, for what he cries, for what he laughs stays there for you. Yes, it is true that I have a part for all the teams I have played for, and Barcelona has shown me how they treat the players who have defended their colors. There it makes me envious. Perhaps in Athletic they talk about our history, but then, in fact, it does not show it so much and Barça to me personally, who was nobody in this great club with great players, has shown it to me. I hope Athletic will win, but if they don’t, I’m not going to be disappointed either. In this case, in this final, I am going to win.

22 flights were detained and canceled at Moscow airports

Oscar 2021: who are the nominees for best actor and actress at the Oscars