X-ray of a massacre: this is how they ambushed and murdered 13 policemen in the State of Mexico 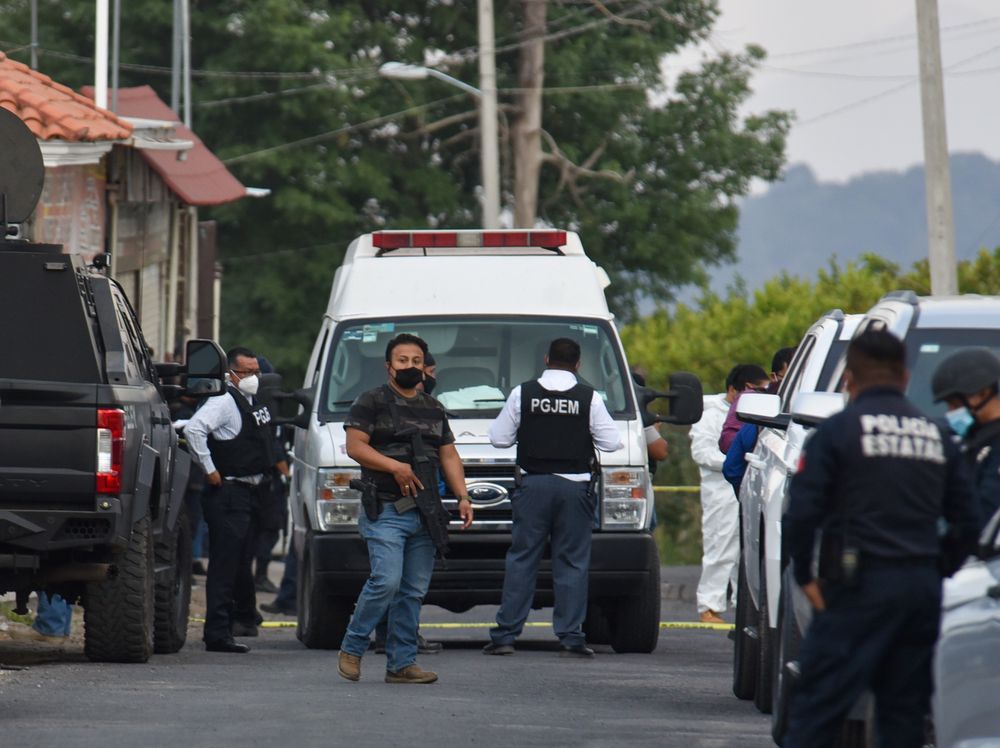 Around 1:00 p.m. this Thursday, the group of 13 agents – eight state police officers and five investigators from the Prosecutor’s Office – crossed through the town of Llano Grande as part of an operation against drug trafficking in the area, state sources tell this newspaper . The town is located in a rural area of ​​the State of Mexico, in the municipality of Coatepec Harinas, bordering the hottest states in the country: Guerrero, Morelos and close to Michoacán. An area of ​​marijuana cultivation and cocaine trafficking, according to the authorities. And there, on a rural highway, they were ambushed and massacred in one of the greatest challenges of the Mexican drug trafficker to the country’s civilian security forces.

The bodies piled up next to the sidewalk and in front of one of the shot patrols gave an account of one of the tragedies that have not stopped in Mexico. The image puts Mexico once again before a crime that recalls the worst years of the war against drug trafficking, launched in 2006 by the then president Felipe Calderón (of the PAN) and that Enrique Peña Nieto (of the PRI) continued until 2018. The current president, Andres Manuel López Obrador (from Morena) coined the famous “hugs and not bullets” as a campaign slogan to announce that he would break with the bloody tradition of 12 years of terror and death that had resulted in thousands of victims and almost 100,000 missing in mass graves. The corpses of 13 police officers showed that Mexico continues to resemble those years of war more than the promise of pacification at an electoral rally.

The convoy had left Ixtapan de la Sal that morning, the most important urban center in this rural area. At the head of the convoy was a Jeep, then a truck type pick up white — the only one without police stamps, where the prosecutors traveled — and behind it, a state patrol, a Dodge Avenger. Although the authorities had knowledge of this patrol, framed in a broader operation to combat organized crime from which they can not reveal more data, the first time that the switchboards were aware that they were at risk was around 1:00 p.m. this Thursday , according to sources from the Government of the State of Mexico to this newspaper.

Through an audio broadcast on social networks, a state agent is heard, presumably at the scene, desperately asking for help on the radio: “I ask for support in Puerta del Carmen, they are shooting us.” “They are Los Rojos, they are shooting at us in Llano Grande,” continues the alleged voice of one of the state police officers who were shot that afternoon. A few seconds later, the Prosecutor’s Office tried to contact the investigating agents. But there was no answer. No member of the operation survived.

The organized crime group referred to by the agent on the radio, Los Rojos, is a split from the Beltrán Leyva cartel, in turn a faction of the all-powerful Pacific or Sinaloa cartel. His business is focused, according to information from the DEA, in the heroin trade. And for years the region has been disputed, along with Michoacán and Guerrero, controlled mainly by the La Familia Michoacana group, according to state authorities. The point where the agents were this Thursday is their area of ​​influence, they point out.

According to the first investigations, authorities believe that the State Police Jeep in front was the first vehicle that was fired upon. From how they found the SUV, it seems that it managed to accelerate in the middle of the shooting, although it is likely that the four officers who were occupying it were wounded. At about 200 meters he crashes into a car and the lifeless bodies of the policemen are left in their seats. Behind, the other two vehicles are caught in the crossfire.

The cars were perforated by bullets on the sides, so they believe that the criminals attacked from both sides of the road. The authorities also point out that the bodies were later piled up next to the sidewalk. The image of the stacked agents sent a clear message to the country: the de facto power that governs the area, which can carry out a similar attack without there being a single detainee to date, is them.

Mexico counted more than 35,000 murders last year, similar numbers to the previous year. The country has been going through a crisis of violence unparalleled for 15 years, as a result of the State’s onslaught against criminal groups. Without being as common as clashes with the Army or the Navy, massacres of police officers like this have occurred in recent years. Sources from the State of Mexico recall the massacre in 2019 of eight state agents in a nearby municipality, in Almoloya de Alquisiras, about 30 kilometers away. Also, in other parts of the country. In October 2019, for example, 13 federal police officers were murdered in Aguililla, Michoacán, a territory that suffers violence like few others. Earlier, in April 2015, an armed group riddled a Jalisco police convoy, 15 officers died.

From the Government of the State of Mexico they denounce the lack of support from the federal government. It is not the first time that the fight against drug trafficking has confronted different governors of opposition parties with López Obrador, in this case it has been Alfredo del Mazo (from the PRI). The fight against drug trafficking is a federal matter – the crime is prosecuted ex officio by the central government – in addition to the fact that the capacity of force and territorial extension of the criminal groups do not obey the invisible borders of each entity.

The federal Secretary of the Interior (Interior), Olga Sánchez Cordero, said this Thursday that the massacre will be investigated by the Prosecutor’s Office of the State of Mexico and not by the federal one, as the state authorities expected. An announcement that has further strained the relationship between governments. And that moves the country away from a real control of the terror of drug trafficking.

A powerful volcanic eruption in Iceland hit the video