Without face-to-face classes: they warn that children and adolescents already suffer from adaptive exhaustion 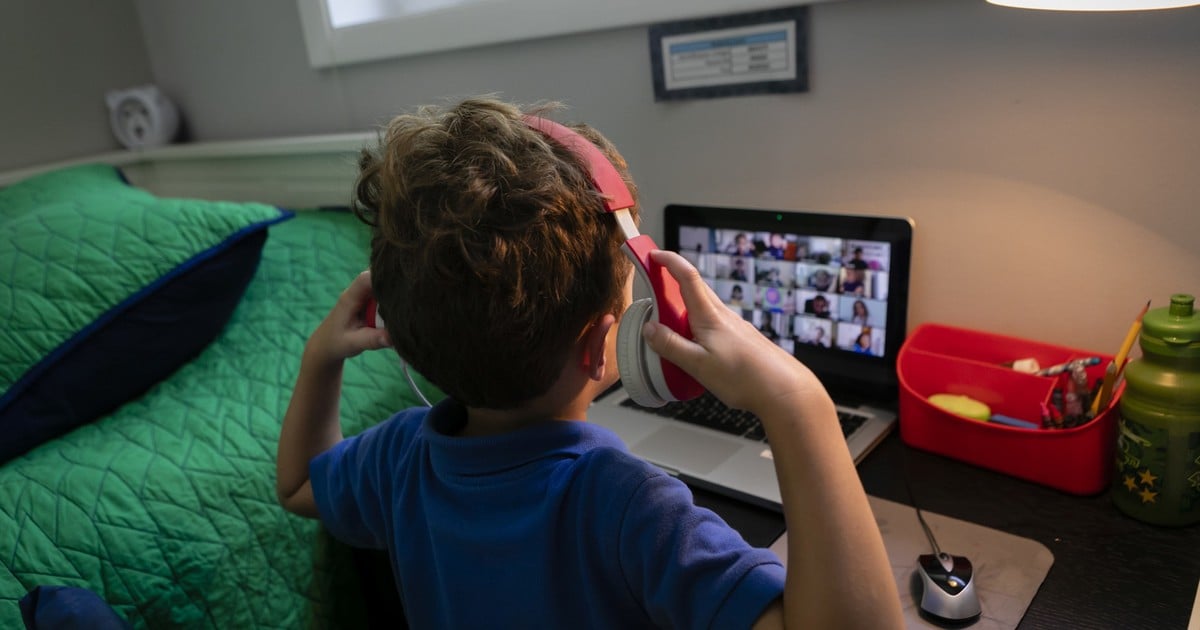 During almost all of 2020, Mariela Farber, a mother of six who lives Caballito, felt that she did “back to primary and secondary school.” She also sat at the “desk” – the most comfortable chair in the kitchen – and almost “studied” each subject as if she were between 5 and 13 years old. It helped them pay attention to “the sign on the screen.” Then came the “careful” presence in schools. Up to now.

If the dispute between the Government and the City of Buenos Aires culminates in the end of face-to-face classes Until April 30, Mariela, like the rest of the mothers and fathers of the AMBA, will return to the home-desk.

If someone is distracted at home, she will guide them to look back at the computer. Or to the manual. Or to do homework. But this mother already has a “back” for whatever comes. What worries him, he says, is that if his children can no longer go to school on Monday, feel that “the bubble was punctured”.

In these days of the second wave of coronavirus, sometimes everything seems “too much”. For boys, girls and adolescents, as happens in this Buenos Aires family, too.

The experts interviewed by Clarion They talk about “adaptive exhaustion”. Are boys and girls no longer “playdough”? They no longer conform to everything? How will they return to the Zoom and lose contact with the course?

Unicef, which this Thursday released a statement with the Argentine Pediatric Society (SAP), will advance the publication of its new report only to reinforce against Alberto Fernández the position that “schools are the last to close” and ask that ” reopen as soon as possible. “

As anticipated Clarion Luisa Brumana, the representative of the organization in Argentina, the most alarming of the results of the 800 surveys carried out with students of the AMBA, is the “ambivalence” with which they spoke of their returns, with protocol, to the classrooms.

“On the one hand, they were relieved to go back to school and, on the other, anxiety for fear that it will end“, said Brumana. In the monitoring they detected three words that were repeated in the answers. Anxiety. Anger and Sadness.

“You have to look at the mental health of children and adolescents. The pandemic generated emotional effects and there are already a depletion of the boys’ ability to adapt“Marked Brumana. It is the lack of” back “. That Mariela, simply as a mother” who sees everything and feels everything, “scored higher, while waiting on Friday in double line in front of the Scholem Aleijem school.

Ezequiel, 13, who goes to Ecos High School, started at this new school and is happy with his classmates. He stayed for lunch with his companions as “last day.” His only expression about the end of the face-to-face classes was, says Mariela, “thankfully I got to know the group and I know who I get along well with. I don’t like every day by Zoom“.

Mauricio is going to sixth grade and is angry that he can’t go back. This Friday morning, the school had already communicated to their parents by WhatsApp the closure until the end of the month. “Today I bring all the books home … Zooms again … the teachers do not listen to me the same, they do not see me if I raise my hand,” he complains.

Celeste is in third grade and had already come to adapt and readjust. He had had a partner with Covid and her bubble two days ago that she was returning to school. “I don’t want Zoom, mommy. I don’t like it, plus they give me homework that I would do at school during class.”

Felicitas, first grader, repeats the question of the moment: “How long are we not going to come to school?”. Trinidad, from room 4, told her mothers the news as soon as it came out: “The teachers told us that we are going to see each other for a few days on the computer and without a mask.”

Josefina Finzi is a psychonalist from the Argentine Psychoanalytic Association (APA) and a parenting specialist. He says that the progression of “being in a pandemic”, that feeling of “will continue”, it is not typical of childhood. And that the exhaustion in the adaptive capacity exists in children and it is not necessary to project the panic of adulthood.

“Children have many resources that are not exhausted. They transform to see dangers, face them, be cooperative, have confidence. As long as they are accompanied by sensitive families. It does not occur in absolute state. It is true that there are children much more needy than others. to be at school with other children. They will have to be helped, accompanied by experts in mental health“, he recommends.

He speaks of “preventive consultations” if the closure occurs, but also if the classes continue.

“Mental health in children worries us. Taking care of ourselves is mobilizing the inexhaustible emotional resources that children have. That will also reassure us adults. Let’s not leave them laden with fear and alone“He warns. The focus is on the” affective repercussion. “The fears that arise from thinking” the changes that we will have to ‘continue making in a pandemic’ “.

Fernanda Rivas, APA psychoanalyst and author of the book “La Familia y la Ley”, marks a unique advantage in the return to full virtuality in education. That each course or group knows how to do not lose the link with each other. There was a 2020 preview.

“You have to try to install the idea that it will not be the same. That there will be some differences. At least, they already know how to distinguish between being far or near. it is not only in face-to-face format. Thus, they will better tolerate the frustration of not being present. If it is installed that it is ‘temporarily’ “, he explains and marks that the school is, for many people at the school level,” the only instance of sociability compared to other areas that were denied to them “. Like clubs, birthdays, and now even outdoor sports.

Victoria, 16 years old, has a good understanding of the denied areas. “A teacher told us that we don’t have to go out because we are going to have time. It made me feel very bad because she is 24 years old and she has already experienced everything that we did not experience due to the pandemic. I may have time, but I won’t be 16 again“, sentence.

“Adults have to put themselves in our place. They don’t have to let their children go to clandestine parties. But they also don’t have to forbid us to get together outdoors or in a bar,” says this teenager from Villa Devoto who asked them to His parents build a “bubble” with your two closest friends while the suspension of classes lasts.

The body and emotions

Depending on which side the center is fixed on, whether in psychology or in medicine, the mind commands the body or the body commands the mind. But those borders are not closed by the coronavirus.

Emotional symptoms are often physical warnings too. More in childhood and adolescence, when it is difficult to verbalize feelings in front of adults and the company and acceptance of those who are in the same stage of life are sought.

“We have no possibilities of generating better virtual conditions for the boys than last year. And we noticed a lot of pediatric disease in 2020. Overweight and obesity, especially. That is eating poorly and moving little. But also, the opposite, anorexic disorders, which depend a lot on the mood, “he says to Clarion the president of the SAP, pediatrician Omar Tabacco.

This specialist is a faithful defender of presence in classes. And he argues for it, exemplifying the intersection between the emotional and the clinical. “Boys came to my office who felt chest pain. They had not fallen, there were no blows. That is anguish, depression. That gives chest pain in boys,” he emphasizes.

For Tabacco, “there is a clear exhaustion in the adaptive capacity of this group”. How do you deal with it? “I have no answer,” he says. But he gives advice and highlights his position on the closure of schools.

“Again, we must appeal to the patience of the children. I do not think that in 15 days the epidemiological situation will improve and they will be able to return to school. You don’t have to lie to them. But it does give them hope. Warn them that at least these days they will have to endure. What they feel is tired of going back to the computer. And the reality is that they are safer at school. There is no doubt that outside they will end up coming together and without protocol or chinstrap. “The bubble has already been punctured.

Bar and restaurant hours to be extended in Mallorca

Soller train back on track soon