With the vision of Khalifa and the follow-up of Mohammed bin Rashid .. the launch of the “World Government Summit 2022” 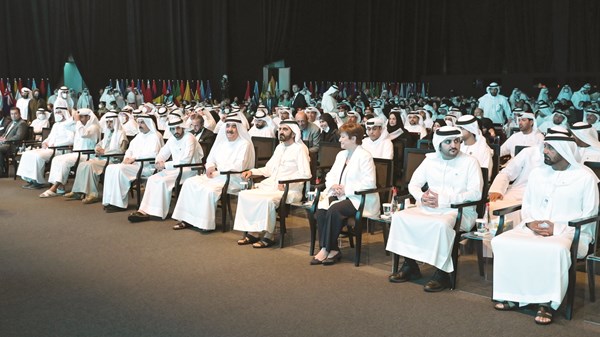 3 forward readings
His Excellency Mohammed Al Gergawi touched on 3 forward-looking readings for the future, the first is that the upcoming speed of change is much greater than we expect, the second is that there are no axioms when dealing with the future, and the third is that government partnerships with companies in the future is a necessity and not a luxury.
Muhammad Al Gergawi said that what happened in the past ten years in terms of scientific, economic, social and technical developments exceeds what happened in a hundred years ago, and what happened in the last two years exceeds what happened in the ten years that preceded them, and the coming will be much faster.
The head of the World Government Summit Foundation added that the digital economy has multiplied 8 times in the last two years, reaching $4 trillion, distance education has doubled 11 times in the last two years, and telemedicine has increased by 154%, while its market size will reach 400 billion. The number of devices connected to the Internet will double from 26 billion devices by the end of the last decade to fifty billion devices in just two years. Regarding the lack of axioms in dealing with the future, Muhammad Al Gergawi said: “We start 2022 and doubts surround this concept, amid unprecedented global divisions, as if we are entering a new world other than what we know and what we are accustomed to.”
He added: “The belief that global strategic alliances, international legal commitments and common values ​​among nations were taken for granted…so that the scales will turn, so that in 2022 we will see a war in the heart of Europe and waves of millions of refugees… We believed that the world had settled through agreements and treaties in the fields of energy security and its future. Today we are faced with more questions than answers in this field.”

The summit.. basic goals
His Excellency Al Gergawi set the basic objectives of the World Government Summit, that they answer the questions of the future, anticipate the most important developments in our world economically, scientifically, technically and politically, and bring the distance between governments and what awaits them in terms of developments and changes coming in the future, indicating that its goal at the end of the work of its current session will be: Try to find out some of the answers and help governments set priorities and monitor challenges.
He stressed that the summit seeks to clarify the picture, highlight opportunities and reveal the challenges that the future holds in the issues of energy security, the future of climate change, government development, the new revolution in cryptocurrencies and the role of central banks.
The President of the World Summit Foundation for Governments reviewed milestones in the history of the summit, which succeeded in anticipating radical global transformations, and said that the summit, through its previous sessions, drew the attention of governments due to the opportunities and challenges awaiting them.
He recalled that the World Summit of Governments in the 2018 session was anticipating the future of epidemics, pointing out that anticipation and enhancing readiness for challenges were the most important element in the equation of governments that succeeded in testing “Covid-19”.
The President of the World Government Summit Foundation touched on the summit’s foreseeing in the 2016 session the future of financial transactions technology “Blockchain” and virtual and cryptocurrencies, and expected tremendous growth, and said: “Today, governments are trying to coexist with the reality of having crypto assets worth $2 trillion around the world. ».

Virtual Reality and Metaverse
His Excellency Al Gergawi said that the World Government Summit hosted several years ago a dialogue on virtual reality technologies with global entrepreneur Elon Musk, and today, metaverse technologies and their huge capabilities and rapid developments have become the talk of the world, amid expectations that the size of this sector will reach 800 billion dollars over the next two years.
He pointed out that the summit had discussed, over the past years, many vital topics such as cyber security and its challenges, food security and its future, climate change and what it bears for the human future, and clean energy and its opportunities.
Mohammed Al Gergawi said: “At this summit in 2013 we had a miniature version of the Museum of the Future, and weeks ago, His Highness Sheikh Mohammed bin Rashid Al Maktoum opened a permanent museum for the future.”
The President of the World Summit Foundation stressed the need to be aware of the challenges posed by the new wave of change, whose effects include the doubling of inflation in the countries of the world four times in the last two years, and the doubling of natural disasters three times than they were in the past decades due to climate changes, which confirms that the study of the future has become It is more important for governments, and that the flexibility of governments and their ability to keep pace with changes has become a necessity more than ever, because the slowdown in responding to changes has greater consequences for countries and peoples.
Mohammed Al Gergawi pointed out that this year’s summit agenda includes more than 14 specialized forums on energy, metaverses and cryptocurrencies, in addition to forums for sustainable development, government development, youth, cyber security and others.
He stressed that the World Government Summit 2022 adopts a main message that changes do not stop, and governments that want to stay in competition must understand and keep pace with all these changes.

See also  Do the Russians support the war in Ukraine?

Ukraine; good news from Zelesky: the president thanks Draghi - Curler