With the non-violent self-defense groups of the West Bank 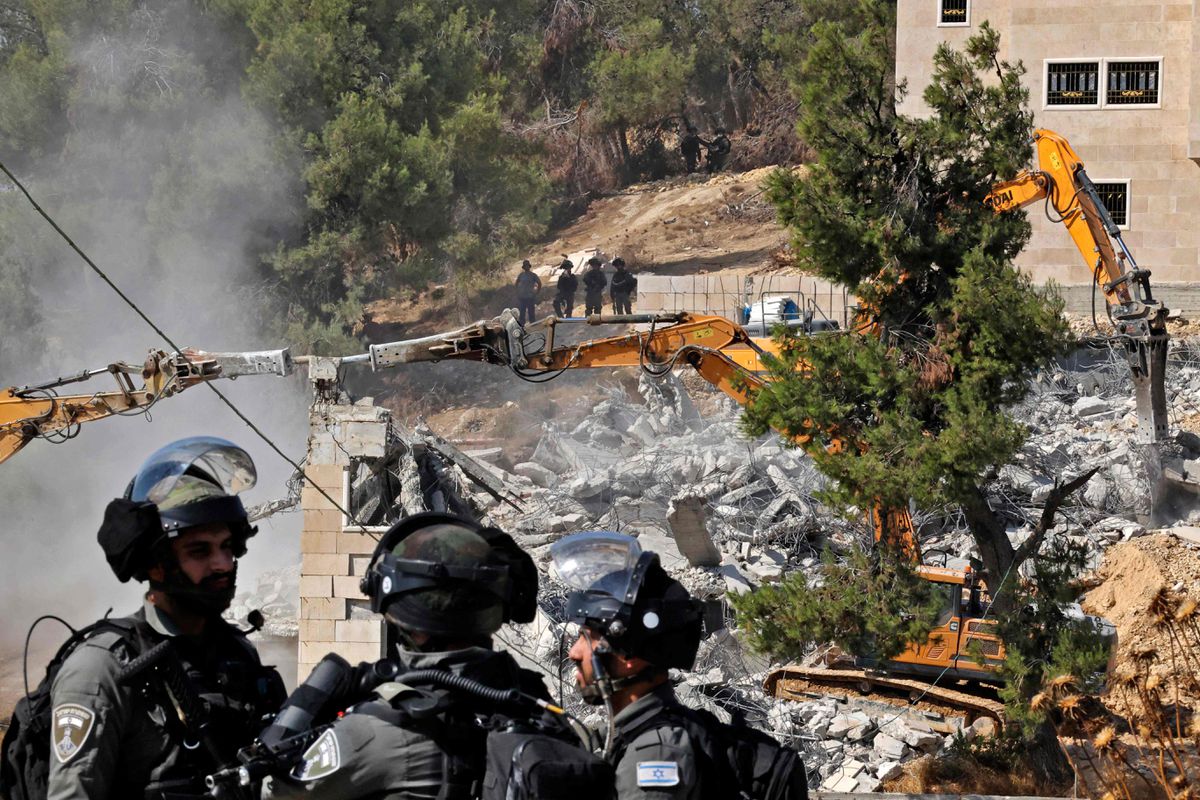 In the desolation of barren terraces in the hills of southern Hebron (West Bank), a group of young Palestinians has organized as a non-violent self-defense network in the face of routine house demolitions and settler attacks on Jewish settlements. that are often protected by the Army. “For the first time we are going to tell our own story, without intermediaries,” Basil al Adraa, 25, explained Wednesday to a group of foreign correspondents in fluent English. Faced with the iconic image of the young man wearing the kufiya, the traditional Palestinian scarf, waving his sling about to stone troops, a new generation of activists wields smartphones to document events that they claim violate the rights of their people.

A law graduate with a vocation as a journalist, Al Adraa speaks from his village of Tuwani, in the middle of Palestinian limbo in Area C: 60% of the West Bank that was left under the exclusive administration of Israel in the Oslo Accords. Tuwani lies between the Maon settlement and the wild colony (not recognized by the Government) of Havat Maon. “In 2003, the Palestinians could no longer use the road that connects them, and the settlers fenced off neighboring Palestinian lands to exploit them now,” says one of the reports of the association that brings together young people.

“Here, south of Hebron, you can see the occupation in all its harshness,” Al Adraa later explained from the promontory where you can see a desert landscape dotted with dusty Palestinian villages and Israeli settlements that emerge as an oasis. “We want the world to become aware of our situation, that the international repercussions serve to pressure Israel to comply with international law,” summarizes the non-violent path of popular resistance that they have chosen as a strategy against the occupation. “This is not like Ramallah or Hebron, here we are under the direct control of the Army. Then we publish the information on social networks ”.

—How do they act when there is a settler attack protected by the soldiers?

“We cannot count on the security forces, who are on their side, but we do not confront them when they burn our fields or stone our houses.” We record videos, we take photos. We document the facts with a form of resistance. We are not silent.

This is an example of one of the reports produced by this Palestinian activist, which has been echoed by Israeli pacifist NGOs, and which have reached the Hebrew press and international media based in Jerusalem and Tel Aviv. “Events of May 14 in Al Rayhiyya, hills of southern Hebron. Dozens of settlers accompanied by soldiers stormed the village around 2:00 p.m. They started burning fields and trees and caused property damage. When trying to put out the fire on his land, Ismail Tubassi, 27, was shot that disfigured his face. The corpse was admitted to the hospital. Despite the evidence presented (photos and videos), the Israeli police have not opened an investigation. “

From the other side of the barrier, an Israeli soldier identified with the number 1,186 in a recently published compilation of testimonies collected by Breaking the Silence, describes his military experience in 2014 in the province of Nablus, north of West Bank: “We had a lot of friction with the settlers because we did not allow ourselves to be used by them. They kept texting us, sometimes with false information. “A group of Palestinians is beating a Jew in a swimming pool,” said one of them. When we got there we saw a Palestinian boy who wanted to bathe while the settlers prevented him ”. From his memory of compulsory military service, he is aware of a reality assumed in the Army: “As soldiers, we automatically sided with the Jew. We saw him as a citizen with rights. Kicking out the settlers was never an option ”.

The arid Bedouin village of Um al Jair, a tin shanty town in the hills of southern Hebron, clashes seamlessly with the tree-lined red-tile houses of the Carmel settlement (450 inhabitants), from which it is only separated a chain-link fence. Palestinian herdsmen bought their land in 1948, newly arrived from the desert area of ​​Adar, northeast of the Negev, after being expelled by the newly created State of Israel. Jewish settlers founded the moshav (cooperative farm) in 1982 on land expropriated from the Bedouins. Um al Jair barely has a hundred residents who cannot even build a corral, on pain of demolition by Israeli troops. The Army Civil Affairs Office routinely denies them licenses for security reasons.

At the gates of Um al Jair lies the district of Masafer Yata, more than a thousand inhabitants of a dozen villages were forcibly displaced in 1999 to allow the construction of a military maneuvering range. The Israeli Supreme Court suspended the collective eviction and allowed their provisional return, although since then the Bedouins have lived in legal limbo, amid constant demolitions of their buildings, many of which have been erected thanks to international cooperation. “Declaring a sector as a shooting area or military compound is a common pretext to expel the Palestinian population from a part of the West Bank,” maintains the Israeli pacifist NGO B’Tselem. “The next step is to later cede part of the territory to settler organizations to build settlements.”

Awad Hathalin, is a 27-year-old English teacher and human rights activist. At the community center in his village of Um al Jair, he revealed what his dreams are for Palestine. “We want justice and peace. Here we know well what it is not to have peace, we have suffered it. But my true dream was to visit Jerusalem. I tried 18 times and I only succeeded when I was accompanying a group of Americans, ”he told a group of journalists from various countries in the heart of the Holy Land his parable about the harshness of the occupation, of the checkpoints, under threat of demolitions and settler attacks in the southern Hebron hills. His dream now is to be able to go to the beach, like the one he met in Jaffa, next to Tel Aviv. “I think there will be no peace until we can all go to the beach.”

The Chief of the General Staff of the Israeli Army, General Aviv Kochavi, tries to curb the high number of deaths of Palestinians by shooting by soldiers that has been registered in the last three months. During the military escalation in the Gaza Strip between 10 and 21 May, 27 fatalities were recorded in the West Bank in the riots against the Israeli military operation in the coastal enclave. And since then there have been another 13 deaths, including those of minors. Faced with this bulky death toll, in 2020 the UN recorded 20 cases of Palestinians killed by Israeli security forces in the West Bank and East Jerusalem.

“We will support the troops when they act according to orders, but we will not accept exceptions or imprudence,” General Kochavi warned on Thursday in a military act of which has reported the newspaper Haaretz. “Many times it is not clear who is the enemy and who is innocent [en un entorno como Cisjordania]”, He specified. “But our mission is to deal with that dilemma (…) and defend our forces without causing harm to innocents.”

On July 28, 12-year-old Mohamed al Alami was killed when the vehicle in which he was traveling with his family near Hebron was hit by 13 bullets fired by a military patrol. In the riots surrounding his funeral, a 20-year-old Palestinian was shot and killed by troops.

Most of the incidents with gunfire by soldiers have occurred in protests in the town of Beita (northern West Bank) against the construction of the nearby wild settlement of Evyatar, where a group of settlers settled in May without authorization from security forces following the death of an Israeli in a Palestinian attack.