With pictures, she breaks into a men’s room, to honor her brother 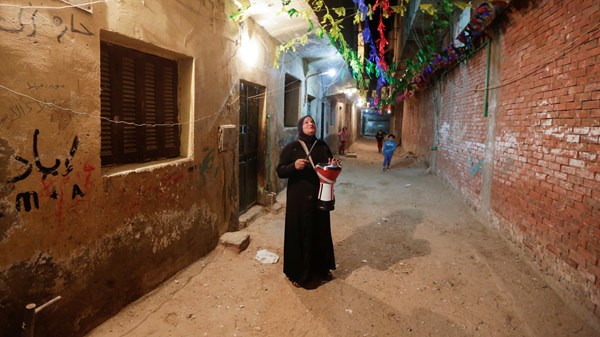 Egyptian Dalal Abdel Kader was not afraid as she invaded a field that is almost limited to men in all the Arab and Islamic countries in which she practices this profession.
Dalal roams the streets of the Egyptian capital, Cairo, to wake people up at dawn during the holy month of Ramadan, to eat suhur.
And because it is not uncommon for a woman to wander the streets of Cairo alone in the late hours of the night, many neighborhood residents and children gather around her as she beats her drums, calling for people to wake up before dawn.

The work of “enchanting” is an ancient tradition that has survived the test of time despite technological progress. And many people in all parts of the Islamic world still perform this work, some with musical instruments, others do it while wearing traditional clothes, but they all carry the same message, which is to wake people up for the meal of the pre-dawn meal.

The first impetus for Dalal was the loss of her brother, who had been doing the job for nearly 25 years. After his death, Dalal wanted not to break his habit and went out doing the same thing he was doing and doing the same good that he was offering to society.
It’s been nearly ten years since she did this work, which was made easy thanks to the family’s support.

Dalal says, “Regarding this subject of suhoor, I took it from my brother, may God have mercy on him, because I used to see him go down with him to see how he works, how he takes the suhoor, and how people have been waiting for him from year to year. I loved this thing from my brother. The year my brother passed away, my sorrows have not passed. We were sitting, waiting for someone to pass by calling our names, and my sorceries did not pass. ”
She added, “He passed away in 2011 and I started in 2012. I only felt myself while I was taking his drum and singing on the street, and so on. I met people who are from my area and who know me and my brother and they encouraged me, saying: God, this is a beautiful thing, Umm Atif, go on. She reminds us of Hajj Ahmad (her brother). ”

People wake up in the early hours of the morning to eat the pre-dawn meal before the fasting day that begins this year at around four o’clock in the morning Cairo time.
“We have known her here for five years,” said a resident of the area, Muhammad Abu Saree. She is a respectable and wonderful lady. When she passes, we will be waiting for her, and we do not wake up except by her voice. ”

Highschool of the Dead: Zombies and fanservice available on Netflix | EarthGamer

Covid certificate needs to be ready a month earlier