With a virtual tribute, the 29 years of the attack on the Israeli Embassy are commemorated 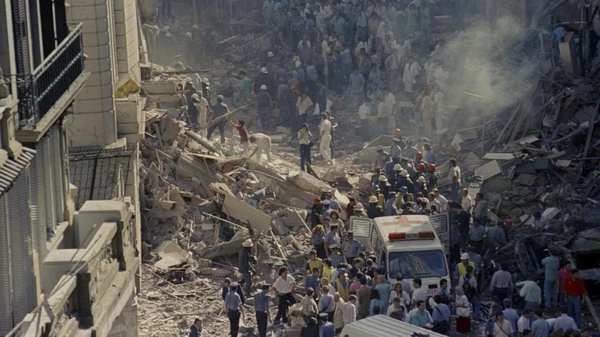 The Embassy of Israel will carry out this Wednesday a virtual tribute to the victims of the attack committed in 1992, on the 29th anniversary of the terrorist attack that left 22 dead and 242 injured.

At the event, which will take place from 2:50 p.m. -exact time in which the attack occurred- the Israeli ambassador to Argentina, Galit ronen, Foreign Minister Felipe Solá and the survivor Alberto romano they will say a few words.

.Also, during this week, in the dry square of Arroyo and Suipacha, the victims may be honored by lighting a candle in their memory.

Last week, the Israeli embassy in Argentina had launched a virtual tribute, in which President Alberto Fernández and his Israeli counterpart participated, Reuven Rivlin.

Galit Ronen, Ambassador of Israel in Argentina will be one of the speakers at this Wednesday’s ceremony. Photos Emmanuel Fernandez

It was a video that assembled images of the collapsed diplomatic headquarters, that March 17, 1992, with others of the dry square built later in the place, as well as postcards of the demonstrations carried out over the years.

“Memory, the search for justice and pain remain intact. This year, together from a distance, #DecimosPRESENTE”, was the slogan with which the diplomatic headquarters synthesized the claim still in force to clarify the fact.

There the President said that, “29 years after the attack, once again, we say present ” and then his peer from Israel said: “Blessed be his memory.”

The terrorist attack on the Israeli Embassy in Argentina occurred on Tuesday, March 17, 1992, causing 22 deaths and 242 injuries, and completely destroyed the headquarters of the embassy and consulate, located at numbers 910 and 916. from Arroyo street in the city of Buenos Aires, in the Retiro neighborhood of Buenos Aires.

Merz mixes up Söder’s fight for chancellor: It’s confusing – and it has to do with Merkel