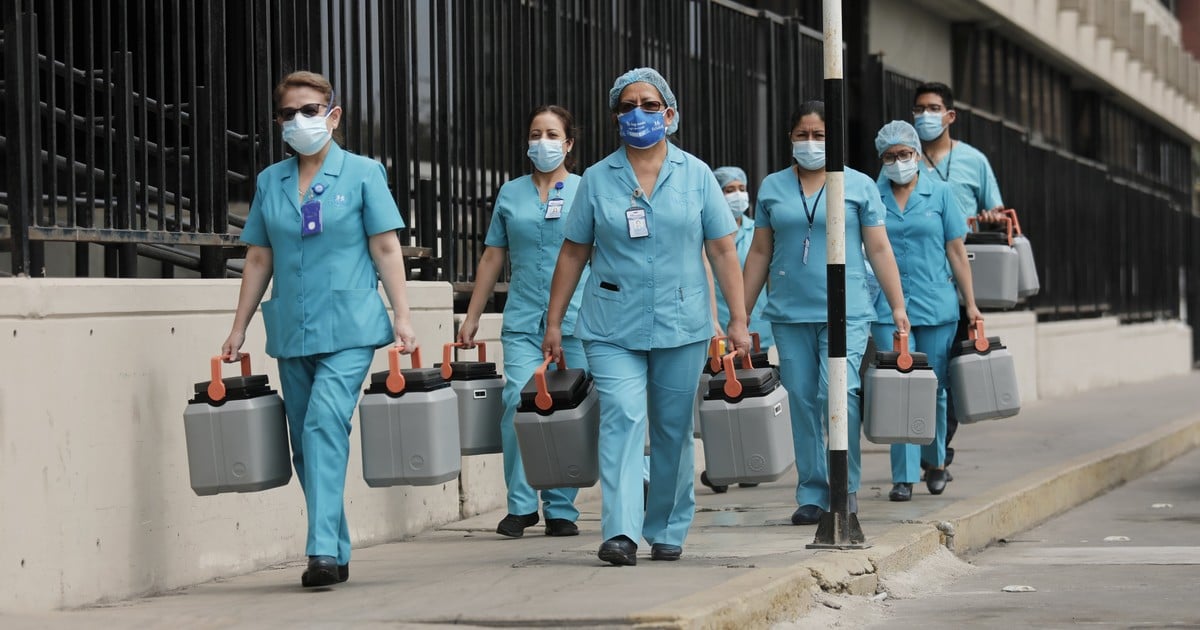 Peru had from this Monday the obligation to wear a transparent face mask, in addition to the chinstrap, to be able to enter shops and markets, in the face of the fierce rise in Covid-19 infections driven by the Brazilian variant, in the middle of the second wave of the pandemic, among other new restrictions decided by the government.

The measures were announced just a day after the country exceed 400 deaths in one day.

“In all cases, the use of a mask is mandatory to circulate on public roads and the use of a face shield to enter establishments with risk of agglomeration, such as: shopping malls, markets, supermarkets, conglomerates and department stores, “says a decree.

The provision also extends the state of emergency from May 1 to May 31, state agency Andina reported.

People in wheelchairs wait after receiving the coronavirus vaccine at the Villa El Salvador Sports Center in Lima. Photo Xinhua

Until today, the transparent face shield it was only mandatory for public transport, but the chinstrap is essential to leave home since the start of the pandemic, in March 2020.

“It is proven that contagions are given by aerosols; the protector gives us extra protection to prevent infection“, said the chief of the cabinet, Violeta Bermúdez, after justifying the decision.

To face the wave, the government also reimposed the quarantine as of Sunday obligatory in Lima and 41 of the 196 Peruvian provinces, mainly in the Andean area and the coast, for being at “extreme risk” of Covid-19 infections.

The latest daily death toll (433) raised the accumulated to 57,230 dead in 13 months of the pandemic, while the total number of cases amounts to more than 1.7 million in Peru, which has 33 million inhabitants. The vaccination plan, meanwhile, advances slowly due to the lack of doses.

The previous record of deaths was 384, registered on April 10.

It was also ordered that from tomorrow 41 provinces of the country, including Lima and Callao, go to the extreme level of contagion of coronavirus, with the restrictions that this means, for three weeks, until May 9.

The curfew will be then from 9 to 4, and social mobility is prohibited on Sundays April 25, May 2 and 9, Mother’s Day, as well as the circulation of private vehicles. Casinos and gyms are closed, and restaurant capacity drops to 20%.

This second wave has the Peruvian health system working with hospitals at the limit of their capacities, with about 15,000 hospitalized and more than 2,600 in intensive caresaid the Health Ministry, the AFP news agency reported. Added to the virtual health collapse is the shortage of medicinal oxygen.

In this context, Peruvians went to the polls to elect the successor to President Francisco Sagasti and renew the Congress, but now the leftist candidate Pedro Castillo and the rightist Keiko Fujimori They will go to a ballot on June 6.

Union decides K question - but at what price? Chronology of a destructive candidate freestyle