With 500,000 dead, Brazil has acts against Bolsonaro in all states 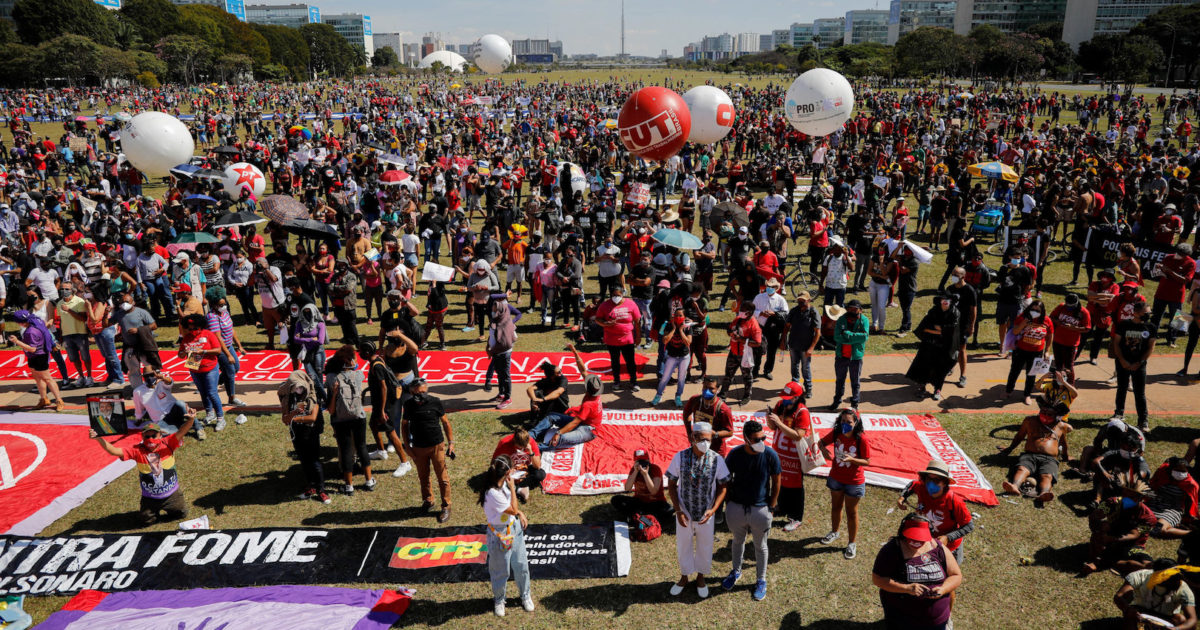 On the day that Brazil reached the mark of 500,000 deaths by covid-19 (19.jun.2021), thousands of people took to the streets of 26 states and the Federal District to protest against President Jair Bolsonaro.

The protesters demanded the acceleration of vaccination, the protection of indigenous peoples, the fight against racism, defended emergency aid and called for the valorization of health and education in the country. Most of the acts were peaceful, except for an isolated action by a small group, which destroyed two bank branches on Rua da Consolação.

The information was confirmed by the São Paulo Military Police on their Twitter profile.

Despite not accurately counting the number of people in the acts around the country, the images indicate that the adhesion seems to have been bigger than to the acts of May 29, when there were also protests against Bolsonaro. O power360 compared the images of the last 2 demonstrations against the Bolsonaro government in Brasília.

Here are the demonstrations in the States:

Amidst the polarization highlighted on June 19, opposition politicians have returned to the streets against President Jair Bolsonaro. On Saturday, in addition to participating in the marches, they took microphones and spoke to the public.

Among them, Orlando Silva (PC do B), Fernando Haddad (PT) and ex-candidate for mayor of São Paulo Guilherme Boulos (Psol) who spoke on Avenida Paulista, in São Paulo.

I gave the message on behalf of the @PCdoB_Official. Defeating Bolsonaro’s genocidal project and saving Brazil is the challenge that must unite those who love Brazil and democracy. Let’s honor the half-million dead brothers by driving fascism out of power. Out Bolsonaro! #19JForaBolsonaro pic.twitter.com/7B2dv9W5QQ

In Rio de Janeiro, federal deputy Benedita da Silva gave a speech. And in Paraná, in the municipality of Curitiba, the PT national president and federal deputy, Gleisi Hoffmann spoke to protesters.

President Jair Bolsonaro mocked the demonstrations against his work and government. In a post made on Twitter, posted the video of 1 act empty with the caption “demonstration against Bolsonaro closes the street and paralyzes the center of Paranaguá/PR”

– Demonstration against Bolsonaro closes the street and paralyzes the center of Paranaguá/PR. pic.twitter.com/h2FTeGYOFN

Senator Flávio Bolsonaro (Patriota-RJ) also made fun of him. With a video of an apparently empty demonstration, he wrote on his Telegram channel “now the president falls… with laughter”.

Artistic personalities also appeared in acts against the head of the Executive. Among them, the singer and composer Chico Buarque. In your birthday. 77 years old, the artist attended the demonstration that took place on Rua da Alfândega, in Rio de Janeiro.

Chico Buarque participates in a demonstration against President Jair Bolsonaro in RJ Disclosure/MST 06.16.2021

Actress Samantha Schmütz also attended the demonstration in Rio de Janeiro. The artist was alongside actors Paulo Betti and Dadá Coelho. On his official Instagram profile, Schmütz wrote:“Real Artist, Fight”. She was a stage partner and friend of fellow actor Paulo Gustavo, who died as a result of the covid on May 4, 2021.