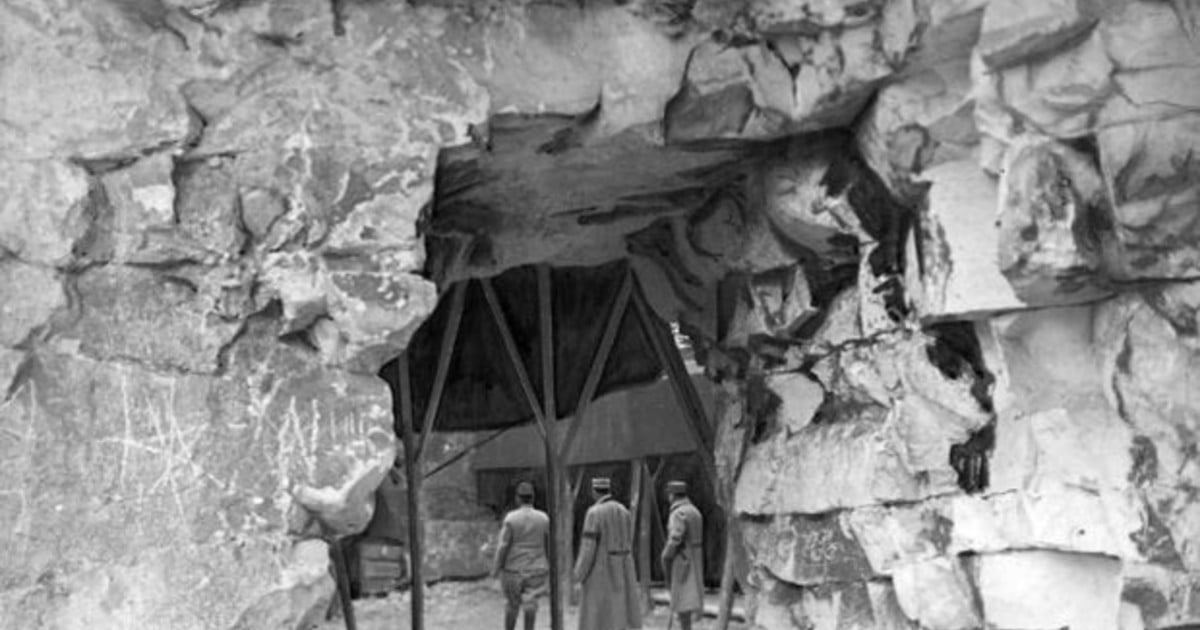 Die in absolute anonymity. Dying suffocated. Die of thirst. Die little by little, and beg for a partner to load your pistol and end your suffering. Dying after one of the longest agonies you can have … Recently, one of the greatest hidden mysteries of the First World War was discovered, more than 100 years later. And its discovery was no accident. But it was illegal.

Finally, the exact location of the winterberg tunnel it came to light. And with it, the remains of more than 270 soldiers Germans found themselves among its rubble.

There, among its walls of earth and rocks during the first days of May 1917, German soldiers were locked up after the French launched an offensive that was incredibly effective. A shell fired from a naval weapon struck the tunnel entrance, which was hiding almost 300 German soldiers and caused further explosions of ammunition that were stored there. Another shell sealed the tunnel exit. The death trap was set.

But one of the three survivors it was Karl Fisser found by rescuers, a day before the fight ended in that area of ​​France where the tunnel was located. Fisser left very harsh accounts of that experience: “Everyone asked for water, but to no avail. Death laughed at his harvest and death stood guard at the barricade, so that no one could escape. Some praised the rescue, others the water. A colleague was lying on the ground next to me and squawked in a cracking voice for someone to load the gun, “Fisser recalled.

The illegal history of its discovery

Its exact location was until now a great mystery, 100 years after the bombing that sealed it. The Winterberg tunnel was finally found in the forests from a hill near the city of Reims, France.

It was from the investigation of local historians, led by father and son, that they found the entrance to this tunnel, the protagonist of the battle of Chemin des Dames, in Nivelle’s Offensive which took place between April 16, 1917 to May 9 of that same year.

But the French and German authorities never seemed to be in a hurry to elucidate the precise location of that tunnel, and even less to recover the bodies of the German soldiers killed in it. Rather, they seemed to want to forget the subject.

Yet a local, Alain Malinowski, He could never get the tunnel out of his head. And on his own he began to investigate. Since the 1990s Alain used his free time to visit military archives at the Château de Vincennes. And for 15 years he accumulated maps, survivor accounts, descriptions, and other data. But all his effort seemed in vain, because the landscape of the place had been very disfigured by the bombings and also by the passage of time.

Until, in 2009, Alain found a contemporary map that showed not only the tunnel but also two roads that until then still existed. With extreme precision he measured the angle and the distance and reached the place, where he found only an anonymous forest.

“I felt it. I knew it was close. I knew the tunnel was there somewhere under my feet,” Alain Malinowski told the newspaper. Le Monde.

10 years passed, and despite the fact that Alain informed the authorities about his find, they did nothing. Out of carelessness or not wanting to unearth a mass grave of war, history seemed forgotten.

But your son, Pierre Malinowski, who spoke with Clarion, absorbed the same passion as his father to unravel the mystery of the tunnel’s location. He resumed the investigation. And he found it.

Somewhat annoyed by the authorities’ refusal to continue what his father had found, he decided to continue with the task. And thereby violating the will of the French and German governments not to want to dig up the tunnel. I knew it was an illegal taskbut decided the punishment was worth facing.

A treasure in the forest

One night in January 2020, Pierre led a team that took a mechanical excavator to the place his father had indicated. They managed to dig four meters and found several objects that showed him that they were in the right place. Among them they found the bell which was used to sound the alarm, rails to transport ammunition, hundreds of gas masks, a rifle, two machine guns, bayonets and the remains of human bodies.

The entrance to the Winterberg tunnel. the forgotten “grave” of German soldiers killed in France during the First World War. Photo: Courtesy Pierre Malinowski

Exclusively for Clarion, Pierre said: “I have done many projects in my life, but this one touched me in a different way and I think it was the most emotional and important of my life. Because it is connected to my family’s history. Also, the Winterberg tunnel, where we finally found it, is close to where I lived. I grew up in that area ”.

The experience that Pierre Malinowski recounted perfectly describes the sensations they felt when they found the tunnel: “I remember that we went at night and it was very cold. I remember that it was all dark, between the snow, the water, the darkness and that it was very, very cold. How to explain? I was there on January 1 and it looked like a ghost forest. And also I remember it was very shocking to meet the tunnel, and all of us who were there went into shock, “said Pierre to Clarion.

Then, when they retired, they covered up the hole they had dug and left the place as anonymous as they had found it. He communicated with the authorities, but after 10 months of slowness in the official response from them, he decided to tell his story to Le Monde.

What happened 100 years ago?

Probably the answer to this question will have been taken to the grave by the three survivors who managed to be rescued from the Winterberg tunnel. But through its discovery and gathering of information, plus the chilling account of Karl Fisser, one of the survivors, the story can put its parts together like a puzzle.

It was one of the countless tragedies of World War I. After the attack of the French projectile that reached the entrance of the tunnel, countless detonations occurred as a result of the munitions that were there. In this way, the 111th German Reserve Infantry Regiment, from the southern region of Baden, was trapped inside the tunnel. Another French shell sealed the exit. And the more than 270 soldiers who were there had no escape.

The entrance to the Winterberg tunnel. the forgotten “grave” of German soldiers killed in France during the First World War. Photo: Courtesy Pierre Malinowski

The following days were of torture and crying out for water, food and air. And as the hours passed the soldiers died for lack of these supplies. Others committed suicide and the weakest came to ask a companion to execute them, because they no longer had the strength to kill themselves.

“We are not talking about what these men felt as professional soldiers, but as farmers, hairdressers, bank clerks or whatever. There is nothing that compares in that regard. And those men were forced to fight a war. And then because of what happened, they were practically buried alive”. Said Pierre to Clarion.

Pierre tries to understand what those German soldiers could have felt: “To be there, in the war, under terrible conditions, to face death face to face, to be 20 meters deep. It is very difficult to describe what those men felt. And for me, all that, it’s a tragedy. Every night, I do not know if for the last nine years, but for a long time, I read and read what could have happened in there, in the Winterberg tunnel. And more than anything from what the surviving soldiers wrote about it. And when I read that, it makes me want to cry. Because, ultimately, many of them were young boys, who had to face suicide or ask a colleague to kill them because they could not resist anymore ”, he tells Clarion.

His greatest wish is that the identity of all of them is known, and may they be honorably remembered by their descendants. “I wish that all this discovery could transmit peace to the families of the soldiers who died, because that way at least they can know what happened,” he tells Clarion.

In turn, Pierre refers to the preservation of the bodies of the German soldiers found, which have been returned to the ground and will not allow them to be photographed. “The bodies will be preserved, so they will be like mummies, with skin and hair and uniforms ”, explains Pierre.

He added: “Remember that the tunnel was where these soldiers lived from day to day, so all their normal possessions will be there. Each soldier will have a story. It will be the largest reserve of human material of the First World War “.

German and French experts agreed to carry out more technical investigations in the spring, but they are cautious and highlight the risks posed by new excavations due to the possible existence of ammunition and explosives residues. Then they will make decisions about what to do with the Winterberg tunnel.

Bargains of the Day

Fires devastate more than 7,000 hectares of forest in northern Mexico