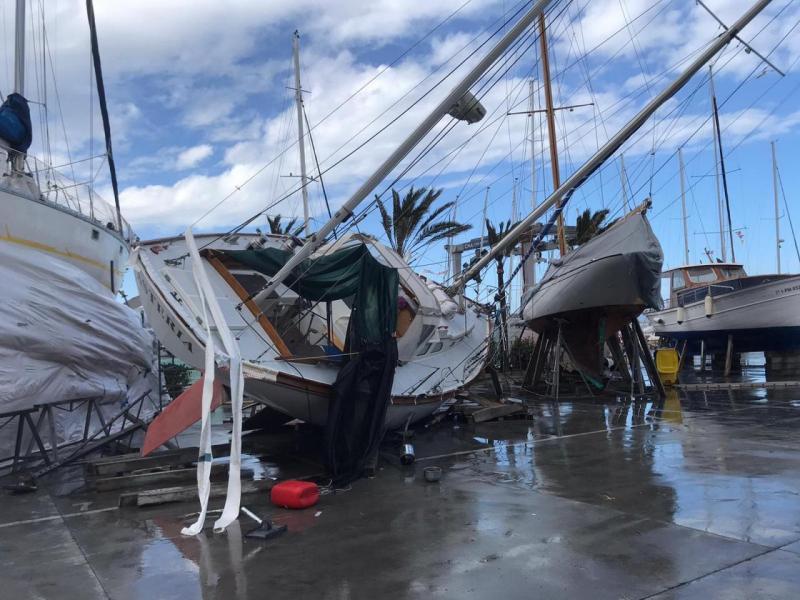 By 15.00 on Friday, the 112 emergency service in Mallorca registered 228 incidents caused by Storm Hortense, the majority of them in Calvia, Llucmajor, Manacor and Palma.

In the capital, the town hall closed S’Hort del Rei, Bellver and Paseo Sagrera because of the high winds and the risk of falling trees. All parks were temporarily closed, as the risk alert was raised to orange. Seven palm trees were brought down on the Paseo Marítimo, in the Plaza de la Reina and in Can Pastilla. Police cordoned off the Calle Pere Dezcallar because of fallen masonry.

A pinnacle at the Santa Eulària Church fell down, there were fallen trees at the ParcBit technology park, at the motorway exit for Can Pastilla, and in Bellver Forest. A woman was struck on the head when an object flew off a car wash on Camí dels Reis. Her condition was described as serious.

The strong winds affected the hospitality sector protest in Palma, and away from the capital there was damage from dislodged roof tiles in El Toro and damage to boats at the dry dock at the Arenal Yacht Club. The Felanitx-Porreres and Arta-Ermita Betlem roads were closed because of fallen trees.

Aemet reported a like of 130 kilometers per hour at Son Sant Airport, which broke a 25-year record – the previous was 118 km / h in February 1996. In the Tramuntana Mountains, a like of 144 km / h was registered at the Alfabia weather station, though gusts elsewhere were reckoned to have reached 170 km / h.

A feature of the Friday storm was a so-called ‘blowout’ cluster of storm clouds (cumulonimbus) which can produce severe weather as air falls rapidly from the cloud and moves horizontally over the ground.

From Boudou to De Vido, Milagro Sala or even Cristina Kirchner herself: who could receive a pardon or amnesty