Will the new crop of credit builders work as promised? 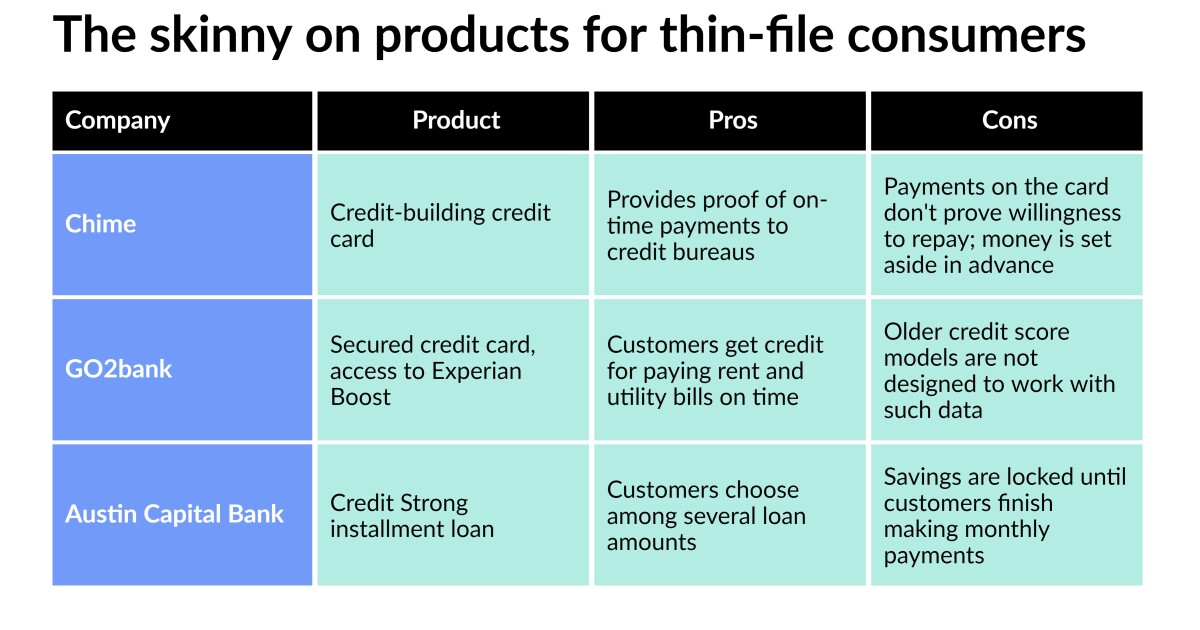 A slew of fintechs are promising consumers that they can raise their credit scores without the need for a credit check or extensive credit history.

Varo’s credit-building program Believe will launch in the coming weeks. Chime debuted a no-interest, secured credit card in June of 2020. Other companies, like Extra and Grain, offer revolving lines of credit that are linked to regular debit cards. MoneyLion extends a loan meant to bolster its users’ credit history. Esusu, a service that reports rental payments to the credit bureaus, has backing from tennis champion Serena Williams; NBA star Stephen Curry has invested in a startup called Kikoff.

There are other products with a niche. Step, a challenger bank, touts credit-building benefits for its teen customers. Sequin, a debit card that fronts money for purchases and repays itself from a linked bank account, is targeted at women, whom founder Vrinda Gupta, formerly of Visa, found were disproportionately being rejected by credit cards or getting lower limits and higher interest rates.

Some banks have recently launched products along these lines. Others offer secured credit cards that may require a sizable upfront deposit.

All these efforts are designed to serve a wide range of customers who could benefit from boosting their credit scores, from young consumers and immigrants establishing a credit history for the first time, to military veterans who spent years abroad and retirees whose records may have stagnated, to those recovering from past mistakes or misfortunes. And most have shortcomings or drawbacks for borrowers or for lenders, which partially explains why they’re not more widely available.

The Consumer Financial Protection Bureau’s most recent report on this topic, from 2015, found that 11% of the adult population in the US was “credit invisible,” or without records from the national credit reporting agencies, and another 8.3% were “unscorable” because of insufficient or stale history.

Anecdotal evidence suggests this hasn’t changed dramatically in the past six years. “We survey our customers all the time, and [credit score help] was one of the top two to three things they were asking for, ”said Aaron Plante, vice president of lending products and banking strategy at Chime.

There is also room for improvement in these initiatives. Alex Johnson, director of fintech research at Cornerstone Advisors, says some of these products are loaded with fees and interest charges. Others, such as credit-building cards or services that report rent and utility payments to the credit bureaus, may not be as effective as the marketing hype leads customers to believe.

“Just because this stuff exists and could end up on a credit report doesn’t mean that a mainstream legacy lender sees the same empirical value in this information,” said John Ulzheimer, a credit expert witness and formerly of FICO and Equifax. “You can’t load up a credit report with gym memberships and Hulu and expect to have a FICO score of 800.”

Credit-builder cards, such as the one offered by Chime, have their users set aside a sum of money each month that will be drawn upon to make payments, often automatically. Unlike traditional secured credit cards, customers don’t need to hand over a large deposit initially, and typically won’t need to pay interest or fees.

“The odds that they will spend more money than they have or miss a payment are extremely low,” Johnson said.

Millions of Chime customers are using this product, Plante said.

The downside to such cards is that the repayment data is not as indicative to the credit bureaus of a customer’s “willingness to repay” because the regular risks and decision-making of repaying loans are taken out of the equation, Johnson said.

That may not be a problem right now as these products are still new. “But as credit-builder products become more popular, it wouldn’t surprise me if the bureaus and FICO, which are constantly tuning models and approaches, look at them and try to better understand how the data correlates to someone’s creditworthiness,” he said. .

For Plante, the upsides to the product are still key.

“The consistent thing we hear from the credit bureaus is this is bringing more people into the credit world,” Plante said. “The invisible credit now have a trade line.”

Another fintech trying to bring more people into the credit world is GO2bank, the digital bank belonging to Green Dot that serves low- to moderate-income customers.

Its secured credit card does not charge an annual fee and keeps the minimum deposit to $ 100, rather than the more typical minimum of $ 200. It also recently partnered with Experian to offer its customers glimpses of their FICO score, credit monitoring, the ability to lock and unlock their Experian credit files, and access to Experian Boost, which lets them improve their scores by paying bills like video-streaming services , phones and utilities on time.

These additions are expected to launch later this year.

Most of these features can be assembled for free through other sources. For example, consumers can sign up for Experian Boost directly. GO2bank and Chime are the only two neobanks to partner with Experian Boost so far.

Abhi Chaudhary, head of direct to consumer at Green Dot, said GO2bank sets itself apart by consolidating this suite of tools in one place.

“Our goal was to create a financial ecosystem for customers in one mobile app,” Chaudhary said.

One potential issue with rent and utility reporting services is that lenders may not rely on scores that incorporate it. FICO 8, for example, takes utility data into consideration but not rental data. FICO 9 incorporates both, but is not yet widely used by lenders.

“The older credit-scoring systems, specifically used in mortgage lending, don’t see those cool things [like rent and utility payments] that consumers can add to their credit reports, ”Ulzheimer said.

Chaudhary still sees plenty of benefit in fostering responsible behaviors among his customers.

Other products, such as credit-builder loans, levy fees and interest. In exchange, they say they help customers improve their credit scores while amassing a chunk of savings.

“I’m not a big fan of the credit-builder installment loans,” Johnson said. “I don’t think it’s worth locking up that much money and paying interest.”

Johnson pointed out that banks have followed in the footsteps of fintechs by rethinking overdraft fees and granting customers early access to their paychecks.

“We will see a resurgence of credit-builder products and secured credit cards coming from banks in much the same way,” he said.

Austin Capital Bank in Texas launched Credit Strong in 2019. It’s a credit-building product that includes an installment loan and a federally insured savings account. With Credit Strong, the $ 341 million-asset bank funds a loan and the proceeds are placed in the savings account. Users make fixed monthly payments that cover principal, which is credited toward the loan, and interest, which compensates the bank for the product. There are no prepayment or early withdrawal penalties.

These payments are reported to all three credit bureaus and once the loan is repaid, the savings are released.

“What they spend in credit building they will save in thousands of dollars of interest expenses over their financial life,” said Erik Beguin, the bank’s CEO and founder of Austin Capital Bank.

Credit Strong will report both positive and negative data, which Begin says is important. Anywhere between 3% and 7% of Credit Strong customers pay late.

“[Credit-building] products that only generate positive payment history could eventually erode the reliability of the credit bureau data and underwriting models based on that data, ”he said.

Beguin said that there were two roads he could have taken: a secured credit card or an installment loan. He chose the latter because he wanted a product with no upfront deposit.

He also feels that one of the major advantages his bank has over fintech credit-building products is robust know-your-customer checks.

“Weak KYC programs that are not subject to Bank Secrecy Act [rules] and federal examination could aid bad actors to manufacture synthetic identities at scale, ”he said.

Johnson predicts that more banks will start offering some of their own credit-building products to compete with the neobanks. This could be as simple as refreshing their secured credit cards.

“More than anything, the biggest problem with secured cards is consumers can tell when the companies they are working with don’t want to work with them,” Johnson said. “Secured cards always had that vibe, like ‘here are all our great cards we want you to have, and oh yeah, here is our secured card.'”

In contrast, Chime positions its credit-builder card prominently on its website.

“It’s a subtle distinction, but it matters,” he said.

The better approach for banks might be rethinking how they underwrite customers and incorporate alternative data. That would mean more customers get approved for regular products.

There are a few examples on the market. Petal has started selling its cash-flow-based underwriting technology to banks and fintechs, in addition to offering its own credit card directly to consumers. TomoCredit launched a credit card in March that assesses creditworthiness exclusively on cash-flow data. Nova Credit helps usher immigrants into the American credit system by making sense of foreign credit bureau information for US banks’ underwriting systems. American express partnered with Nova Credit in 2019.

In May, The Wall Street Journal reported that some of the largest US banks will start sharing data on customers’ deposit accounts to expand access to credit. This pilot program grew out of Project REACh (Roundtable for Economic Access and Change), an initiative by the Officer for the Comptroller of Currency to promote financial inclusion. JPMorgan Chase is one bank involved with Project REACh. Mark Brucker, chief risk officer at JPMorgan, said the goal is to broaden access to credit responsibly.

“Depending on what we learn through this effort, underwriting models may evolve in the future to account for new alternative data sources,” Brucker said via email. “While we’re beginning with deposit account information, as we gain experience, we’ll consider expanding the techniques to evaluate other areas, such as rent, utilities and other payment information.”