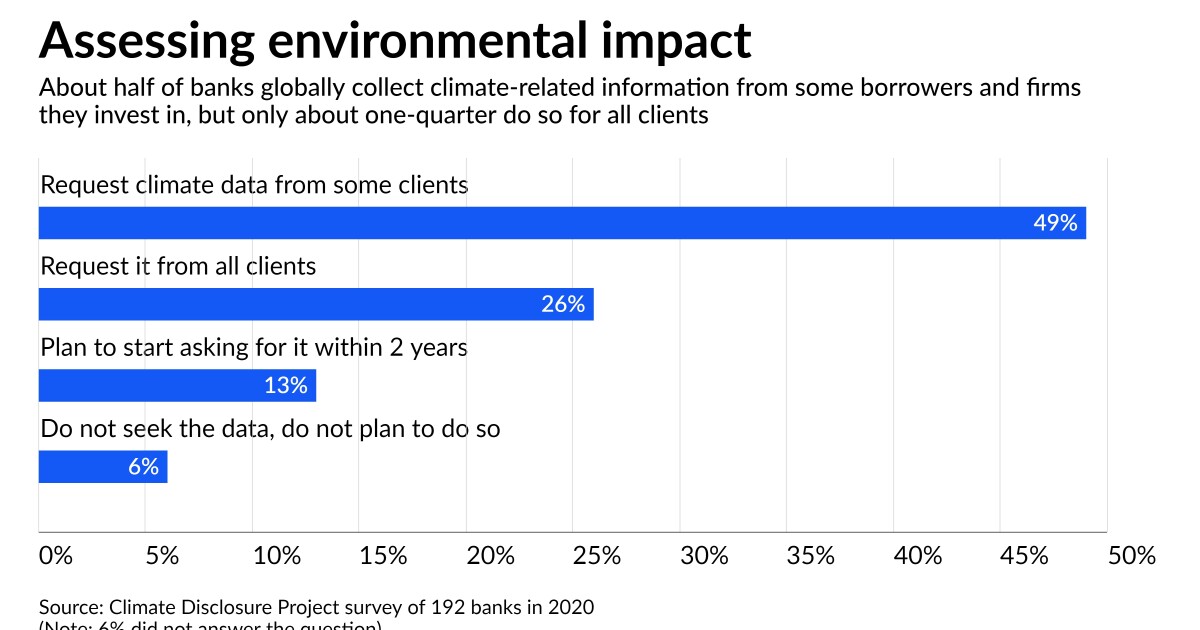 WASHINGTON – A battle is brewing between bankers and environmental advocates over the scope of the climate-related data that the Securities and Exchange Commission should require public companies to disclose to investors.

While many bankers have been willing to work with the SEC as it develops a framework for companies to reveal their contributions and exposure to climate change, they are concerned that the agency may request data that will be too difficult for the industry to collect, measure and report.

Industry representatives are specifically concerned with the possibility that the SEC will require banks to disclose Scope 3 emissions, which stem from business-related assets and activities not owned or controlled by firms. For banks, it likely means requiring the collection of climate data from all the companies they lend to or invest in.

Meanwhile, activists who have pushed for more disclosure rules surrounding climate-related activities argue that Scope 3 emissions are necessary to ensure that investors have a full picture of all companies’ climate footprints.

The SEC is expected to move forward with some form of new climate disclosure requirement for publicly traded companies under Biden-appointed Chairman Gary Gensler.

“I think that we have to assume that the SEC is going to do something in this field, as it is clearly one of Chairman Gensler’s top priorities,” said Isaac Boltansky, director of policy research at Compass Point Research & Trading. “So the battle now isn’t over whether something will get done. It’s over what will get done, which goes to the heart of… the scope questions. ”

The debate coincides with discussions by other regulators about requiring banks to undergo climate change stress tests. Most big banks have indicated they could pass scenario testing like those being conducted in the United Kingdom, though risk experts say even the most committed banks would be challenged to find, analyze and model the nonfinancial data necessary. Similar kinds of data-gathering worries concern banking officials trying to figure out – and shape – the course the SEC takes with disclosure requirements.

The Task Force on Climate-Related Financial Disclosures, or TCFD, an international organization that attempts to set standards for companies’ climate disclosures, recommends that firms disclose Scope 3 emissions “if appropriate,” as well as Scope 1 and Scope 2 emissions, which are easier for companies to measure. Advocates have argued for the SEC to use the TCFD as a model for its approach to climate disclosure.

But banking industry insiders say that Scope 3 disclosures are more challenging for banks to report than for some other industries.

“It’s definitely a question that’s occupied the attention of nearly all of our financial institution clients,” said Betty M. Huber, who is the co-head of the environmental, social and corporate governance practice at Davis Polk & Wardwell. “It is difficult for all industries to measure and track their Scope 3 emissions, but for some industries it’s harder than for others.”

“Scope 3 emissions for banks are basically… the indirect emissions in their value chain, through the clients that they’re providing financing to,” said Lauren Anderson, senior vice president and associate general counsel at the Bank Policy Institute. “What they need to do is basically aggregate that up across clients, sectors and then look at that in terms of their total portfolio. So it’s not a small job. And also, it’s not necessarily straightforward, given some of the data inconsistencies and the data gaps that exist. “

According to a 2020 report by the Climate Disclosure Project, a nonprofit that advocates for companies to report their environmental impacts, roughly 25% of all financial institutions disclose their financed emissions. In a survey of banks, CDP found that only 26% currently collected climate-related data from all of their clients and investees, while 49% of banks collect climate-related data from “some” of their clients.

On Wednesday, the $ 153 billion-asset Regions Financial, based in Birmingham, Ala., Issued its first report in conjunction with the TCFD. In the report, the company included some of its Scope 3 emissions, describing it as an “emerging discipline.” There were no mentions of customer emissions, but the report did include Scope 3 estimates tied to employee business travel, including 9.1 metric tons of carbon dioxide in 2018, 8.4 metric tons in 2019 and 2.4 metric tons in 2020 amid pandemic-related social distancing.

Lee Reiners, executive director of the global financial markets at Duke University School of Law who serves on the university’s Climate Risk Disclosure Lab steering committee, said that Scope 3 emissions could account for a predominant portion of a company’s climate footprint.

“For a lot of companies, Scope 3 emissions will account for 90% or more of their carbon footprint, ”Reiners said. “So if they’re not disclosing Scope 3, it’s hard for investors and policymakers to know how much they’re contributing to COtwo emissions. “

Scope 3 emissions were roughly 700 times larger than operational emissions that would be evident in Scope 1 and Scope 2 emissions disclosures, according to the CDP’s report.

“Scope 3 emission disclosure allows investors to easily identify which banks are overinvested in high emissions industries like fossil fuels that are vulnerable to policy and technological shifts towards a low-carbon economy,” Shrago said. “Disclosure allows investors to assess this transition risk directly and allocate their capital accordingly, instead of taking a bank’s word for it.”

But industry representatives say that the task of collecting Scope 3 data becomes challenging for banks that mostly have smaller, privately held clients.

“For the US banks that lend primarily to the mom and pops, that data currently doesn’t exist,” Huber said. “So for banks to be required to disclose what they don’t have, and what may be extremely challenging to get in the future, is an issue.”

Climate disclosure advocates argue that it shouldn’t be too difficult for banks to disclose their Scope 3 emissions, because there are organizations like the Partnership for Carbon Accounting Financials, or PCAF, that already work with banks to help them estimate their Scope 3 climate emissions .

More than 130 financial institutions, including Morgan Stanley and Citigroup, have already committed to disclosing the greenhouse gas emissions associated with their portfolio or loans and investments with PCAF.

“We have from very small credit unions to BlackRock … committed to a [Scope 3] standard, ”said Ivan Frishberg, a member of PCAF’s steering committee who is also director of impact policy at the $ 6 billion-asset Amalgamated Bank, which has a reputation for political activism and discloses Scope 3 emissions. “We’re a small bank. We don’t have the resources of these big players. And somehow we are able to do it. “

Anderson said she hopes that the SEC, in contemplating its climate disclosure proposal, allows institutions to gradually transition into a new reporting regime if they eventually plan to require Scope 3 disclosures.

“I think banks are hopeful that whatever the SEC proposal is, in terms of substance, that they understand that this can’t be done in a kind of big bang way,” Anderson said.

Laura Alix contributed to this article